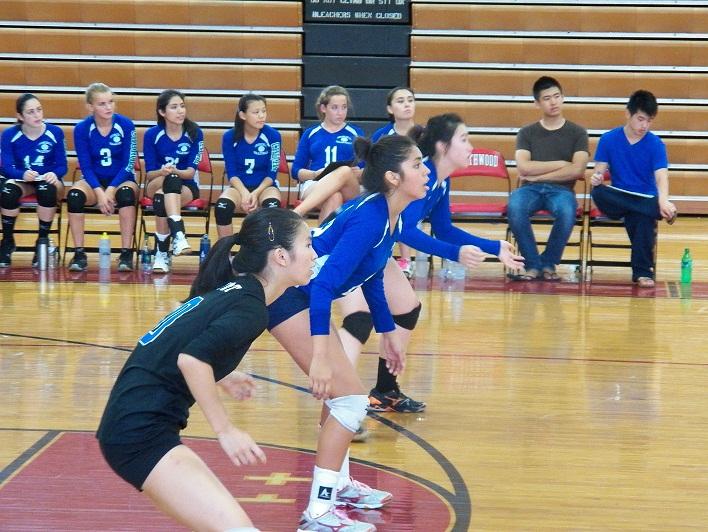 The volleyball soars over the net from the Clarksburg side of the court. Senior Carina Graham leaps up, hits the ball and aces it. Point Churchill.

The team won its third game of the season 3-0 over Clarksburg Sept. 13.

“In the Clarksburg game it was all about defense,” coach Cindy Hillard said.

Five players had over five digs each, with setter Adrianna Lee having the most digs with eight.  Middle blockers Graham and Sara Chang had six and seven blocks respectively. Outside hitter Kaitlyn Hillard and setter Lucy Bedewi each had three aces.

The team also won its second game of the season 3-0 over Northwood Sept. 6.

“We played strong against Northwood,” Cindy Hillard said. “We are working together better with every practice.  The middles Graham and Chang are really starting to click with our setter Lee, which will make for an exciting season. Both can put the ball straight down on the floor.”

Turning points were key to the Bulldogs’ success.

“During the match Chang and Graham both had several key blocks to shut down Northwood,” Cindy Hillard said.

Freshman newcomer Bedewi had a serving run with 12 serves in a row. In addition to her setting, Lee wiped Northwood with five aces.

“Offense outside hitters Kaitlyn Hillard and Jasmine Soriano were twin forces with six kills each,” Hillard said. “On defense, Olivia Chao and Katherine Liu had eight digs between them.”

The girls volleyball team started the season with a 3-0 win over Wheaton Aug. 31.

“Two of our major players were not there, Chao and Chang, but everyone played fantastic,” junior captain Kaitlyn Hillard said. “Our senior setter, Lee, was amazing as always, and our new rising libero, Liu, adapted to her role efficiently.”

The team has upgraded its playing strategies from last year and now focuses on fine-tuning skills.

“Compared to last year we are just notching it up a bit,” Hillard said. “We are running a faster offense and a broader defense. In addition to skills, we are pushing our conditioning.”

Some schools have the team worried, but they hope their new improvements will help them overcome all opponents.

“Our toughest teams in the regular season are yet to come,” Hillard said. “They are Richard Montgomery, Walter Johnson, Poolesville and Wooton. WJ is the toughest of the five. We have a strategy for playing them that I think could give us a win.”

“I think we are going to do better than last year,” Lee said. “Most of the team is returning players, and we have a lot of club players.”

The Lady Bulldogs hope to continue their winning streak against Walter Johnson Sept. 20.

“From this match, I hope that we can continue to win and end up in the top teams of the county,” Hillard said.