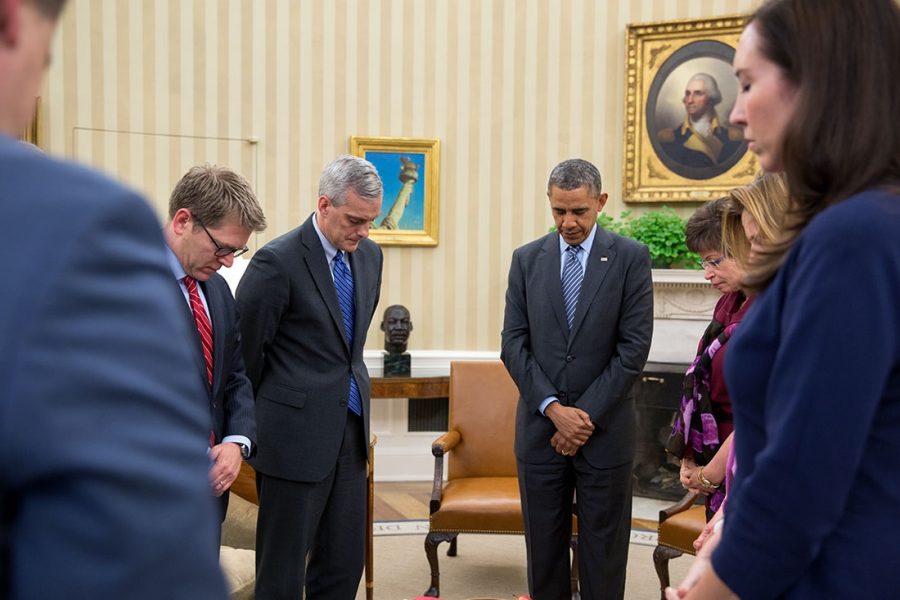 President Barack Obama and his cabinet staff participate in a moment of silence after the Sandy Hook Elementary School shooting 2012.

Around the world, the moment of silence is practiced when a tragic event occurs as a way for communities to come together, mourn the loss of loved ones and provide support to all who were impacted by the tragedy.

The shootings at Marjory Stoneman Douglas High School in Fla., the Capital Gazette in Md., the Tree of Life Synagogue in Pa. and the Thousand Oaks Bar in Calif. may have happened in different corners of the country and at different times, but all had a strong impact on the communities. Moments of silence helped to unite people and bring comfort through the pain and horror of tragedy.

In light of these events, practicing the moment of silence more often could further develop relationships and strengthen connections within a community.

According to a May USA Today article, the senior class of Marjory Stoneman Douglas High School held an elaborate prom May 6, filled with the standard fair for such occasions: dresses, suits, music and dancing.

What made this prom different from other celebrations across the country was that this prom included 17 seconds of silence to honor and remember the 17 students and staff who were killed in the shooting three months prior.

The prom served not only as a celebration for the graduating class, but also as a memorial for those who were killed in the shooting, four of whom were seniors. This prom allowed for students to come together as both a stronger class and a stronger community, provided an opportunity to remember the students who couldn’t attend this event, and ensured that those students are never forgotten.

According to a July New York Times article, a gathering of reporters from numerous news outlets came together in a moment of silence to comfort and assist the surviving Capital Gazette staff after the shooting at their newsroom in Annapolis.

The moment of silence that happened exactly one week after the shooting was to honor the staff members and their hard work. In addition, the news community wanted to support the families of the victims.

As a result of the giant gathering, there was an opportunity to form fundraising campaigns and create scholarship funds in memory of the victims. More importantly, it encouraged news agencies from all over the country to unite together and give a morale boost to the Gazette’s newsroom and the community of Annapolis, as well.

Even though it’s a small aspect, a one to two minute moment of silence can be powerful. After tragic events, everyone in the community ultimately returns to their daily lives of work or school. The moment of silence provides families with a peaceful time-frame to reflect on their loved ones that were taken from them.

According to a 2014 article by Newsmax, Ala.’s legislature passed a new law in 2001 because the first law passed in 1985 allowing a moment of voluntary prayer was unconstitutional for the schools. Meanwhile, in Ga. and Va., the laws were found to be constitutional.

The district courts decided that the laws were not unconstitutional because they did not advance or inhibit religion. Furthermore, the laws did not create excessive government entanglement with religion.

In an instance, the moment of silence is a gesture of respect as it offers a brief moment for the community to pay their respects in remembrance of the victims and their families. The power of this short occasion is that it touches everyone from different backgrounds and cultures.

The moment of silence can be seen today at sports games and annual commemorations of monuments and statues. However, what the moment of silence needs is an expansion to communities that, even if they were not directly impacted by the tragedy, would be a way to respect those who lost their lives.

The moment of silence may be seen practiced in other parts of the world, but  one need not look far considering its impact in the WCHS community.

At WCHS, the moment of silence can be practiced if a student takes their own life, as it would provide a period to reflect upon the student’s life and their impact in the community. The moment of silence would allow WCHS students and parents to go beyond just acknowledging a student who lost their life, and allow for a moment to stop and contemplate the loss.

As for the whole community of Potomac, the moment of silence can be a powerful tool in unifying the numerous diverse neighborhoods across the area, especially when a horrific event rattles the area; people will realize that the incident is closer to home than they think. The brief but compelling moment presents an environment where people will not feel alone in mourning.

Especially since it’s the holiday season and there are families who are celebrating without their loved ones, the moment of silence can give people a chance to remember their loved ones even amidst the laughter and smiles of this jolly time.