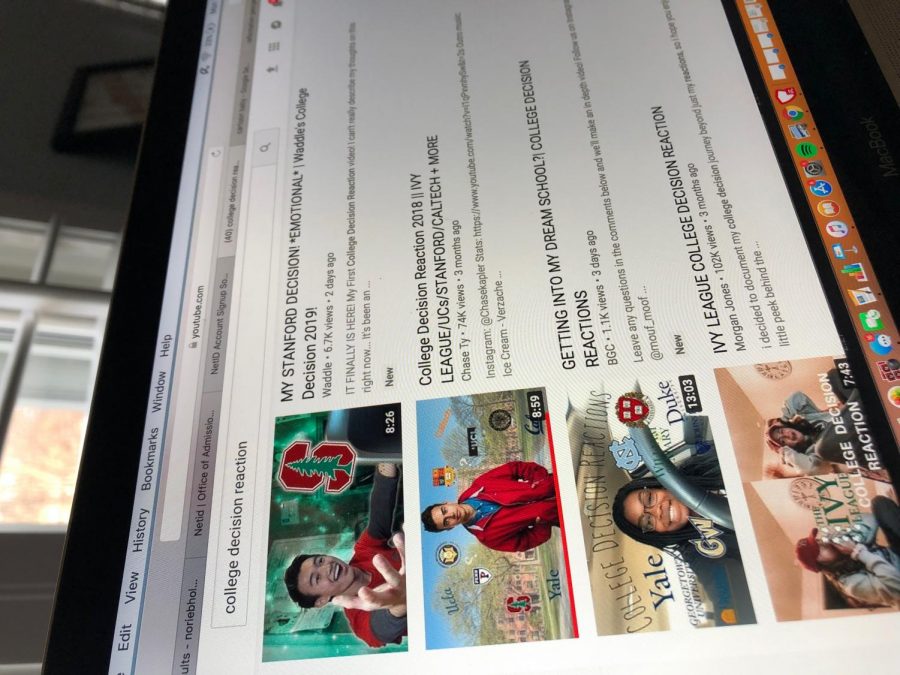 As the student opens his application portal and types in his password, a swarm of his friends watch intently with looks of worry written all over their faces. After a seemingly infinite stretch of silence, screams erupt from everyone as the room turns into a mosh pit. He got in.

This is a description of one of the most famous college decision reaction videos that went viral in 2017. In this video, 16-year-old Ayrton Little gets accepted to Harvard College while surrounded by a crowd of his peers. Little’s college acceptance video is one of the thousands that have found their way to YouTube as more and more high school seniors film their reactions to reading their college decisions and compile said reactions into videos.

While harmless in theory, these decision reaction videos are anything but healthy to watch. As high schoolers, one of the pressures we are constantly faced with on an everyday basis is getting good grades, since good grades equal a better transcript that could get us into the college of our choice. These videos, although addictive, are hurting WCHS students and should not be indulged in.

According to a Feb. 2014 survey by the American Psychological Association, 83 percent of high schoolers said that the biggest source of stress for them is school, while 69 percent said their stress radiates from trying to get into a good college.

These acceptance and rejection videos only increase this stress tenfold. Not only does the viewer experience the heart-stopping nervousness of opening the letter and waiting to hear the result, but the people who make these videos often put their standardized test scores, GPA and extracurriculars in the description. This allows viewers to compare themselves to the student in the video, which might discourage them greatly.

The reality is that the college admissions process relies on millions of factors; just because one might have the same ACT score as a kid that posted a video of himself getting accepted into an Ivy League school, that does not guarantee one’s admission into the same school.
According to College Board, many colleges not only look at grades and standardized test, but also at personal essays, recommendations, geographics and students’ background. Every single applicant is different, and comparing oneself to a different person who got into a competitive school will do nothing but cause stress.

Another reason these videos should not be trending is that they are addicting, especially for high school seniors who may be waiting to hear back from a school they are watching people react to. Senior year is a student’s last year at home before they move on to a completely new and different chapter of their lives and should be lived to the fullest rather than worrying about college and who’s going where.

In fact, going to a top ranked school by no means guarantees success. There is a history of many men and women graduating from schools that are not on the top ten and becoming wildly successful.

According to a Sept. 2017 Business Insider article, many famous and successful people such as Joe Biden and Rep. Maxine Waters of Ca. went to state schools.

These videos only enforce the idea that rank matters more than anything, an unhealthy outlook which will leave many high schoolers disappointed.

One can say that these videos are fun and entertaining to watch; it is without a doubt exciting to watch a student and their parents scream and cry with glee and fantasize about your own acceptances. However, it also sets an idea on how acceptances should go and may lead to disappointment when an admitted student does not receive the same hype that they watched on YouTube.

College acceptances and rejections are nerve wracking and a large part of a high schooler’s senior year. It is stressful enough to check a decision reaction; we should not entertain ourselves and add to our stress by watching others open theirs.