Shame on you, parents. Where’s the integrity? 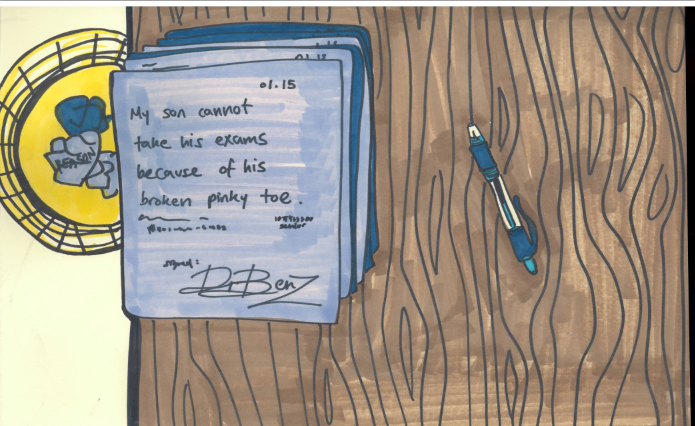 Dear Dr. Benz,
My child has been dealing with high levels of stress and anxiety brought about by this time of year. He has worked long and hard this past semester, copying his classmates’ homework, finding answers online, and begging his teachers for 10 percent grade bumps. Please consider this request to allow him exemption from the exams that he will most likely fail. Sincerely,
A Concerned Parent
P.S. Attached is a letter from a good family friend, who also happens to be a doctor, detailing the effects of my child’s sixth grade concussion. Just in case my excuse isn’t sufficient. Let me know if I need to call on any other doctor pals to come up with more reasons why my child should be at home watching Netflix, rather than at a desk toiling over an exam.
(*not an actual letter written to Principal Joan Benz)

We get it. Exams are stressful. High school is stressful. College, sports, parents, grades, the list could go on forever. However, when some students are subjected to more stress than others, simply because certain students found an easy way out, it is cause for frustration.

According to Principal Joan Benz, 48 students, or .02 percent of the CHS student body, were exempt, and only for reasons deemed valid by the “filter person,” Benz herself. Benz is responsible for reviewing every request for exemption and determines whether the request is accepted.

Assuming these statistics are accurate, a gross assumption since an informal survey conducted by social studies teacher and Elected Faculty Representative (EFR) Adam Field claimed figures nearly twice those given by Benz, the fact that even a percentage of students were allowed to escape what should be a mandatory experience is irritating.

Obviously, there are students who had to deal with a death in the family, an unplanned emergency or a serious illness. In these cases exemption is justified. These cases are the reason exemption exists, and these students are the ones who may face consequences of the actions of the other population of exempted students: the cheaters.

According to Benz, she takes parent requests for exam exemption seriously.

If a parent has taken the time to send Benz an email and provide a doctor’s note of evidence, then it would seem that the student has an obvious reason for excusal.

The system as it exists should be relatively fool-proof because what parents would help a student blatantly avoid a huge chunk of assessing student’s skills for the semester? The answer is too many.

Doctors are not hard to come by in Potomac. Ask any CHS student to name one doctor he or she knows rather closely, and almost all students would be able to. It is not hard to ask a doctor friend to back up the claim that your child has a concussion, which was, according to Benz, one of the leading medical excuses, and ask the unassuming principal for exemption.

There are plenty of ways in which students and parents stand to gain. Exemption in the case of a trend upwards, going B-A for example, results in the higher grade of the trend, so an A would result from the aforementioned example. With all the pressure that rests on one two-hour segment of time, it seems almost obvious for students to attempt to achieve the higher grade in any way they can.

However, for those B-A exempted students, there were the B-A-B un-exempt ones. The students who showed up for an exam at 7:25 a.m., spent two hours scrawling furiously and received an 89 percent, getting a B for the semester.

In this case, cheaters never prosper seems like the exact opposite of the truth. The exemption system as it exists makes it so that cheaters can prosper, and takes away from the students who truly put in effort.
According to Benz, she would consider creating more of a process for having students make up exams rather than be exempt completely.

This sort of process seems to be in place at other schools in MCPS already. Perhaps CHS should look to implement similar procedures.

According to a WJ sophomore, who requested her name not be used, she came down with the flu right before exam week started. After missing the first two days of exams, she finished out the week of exams and made up the missed ones at the end.

Meanwhile, according to Benz, many students at CHS came down with the flu because of the ineffective strain of the vaccine, and these students were exempt. She does not know how other schools deal with the exemption process, as it is left to the principal’s discretion at each school.

Perhaps if exam excusals were not synonymous with an easy way out of work, more students would realize that the fairest, and in the long-run, most effective, way of dealing with their exams is sitting down and taking them.

If a student has put in the work for the past semester, the exam is provided to award this effort. If not, those students should be looking for way to ensure a good grade through hard work and proactive preparation, rather than a quick escape.