Getting Z’s could lead to more A’s 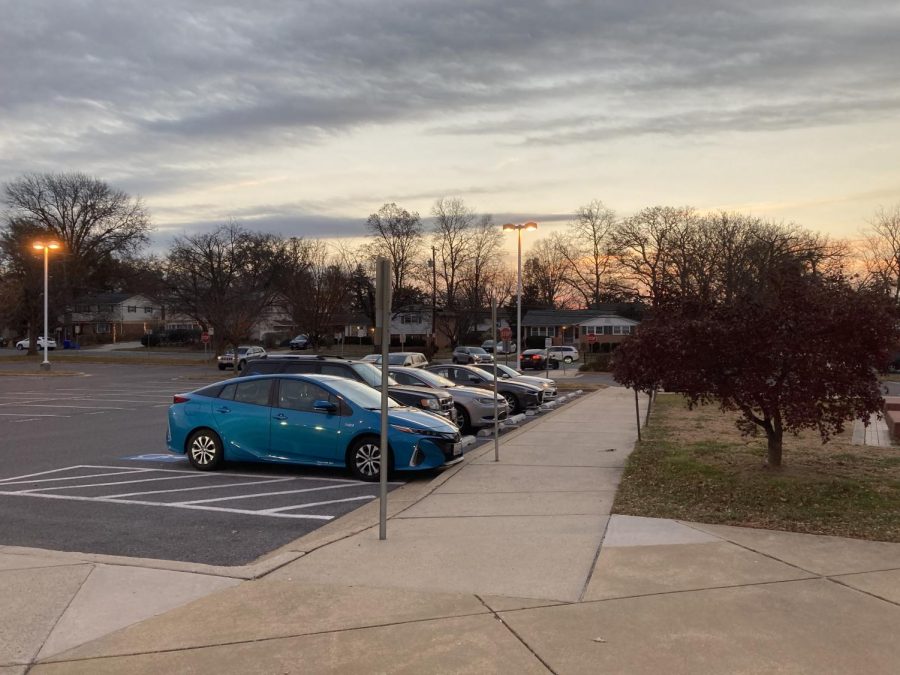 The WCHS parking lot on the morning of Dec. 6. While getting to see the colors of the sunrise over Gainsborough Road are a treat, students should not have to see them because schools should start later.

An hour’s difference in the morning could haunt kids’ sleep cycles for life. If an issue of this magnitude has been caused by the school system, the conversation of schools opening later needs to be intensified, especially in MCPS.

The American Academy of Pediatrics suggests that at the earliest, schools should start at 8:30 a.m. WCHS starts at 7:45 a.m. start time, so students have reason to be concerned about MCPS’ lack of consideration for student health.

Furthermore, MCPS is not alone in this issue, as 93 percent of high schools and 84 percent of middle schools start before 8:30 a.m., according to a Centers for Disease Control and Prevention (CDC) study conducted last year. MCPS must do its part in the nationwide fight to change this and start later.

Children ages 13 to 18 should ideally be getting eight to 10  hours of sleep per night in order to maintain mental and physical health, according to the CDC. When taking into consideration time for getting ready and transportation, many students are forced to wake up at or before 6:45 a.m. To adhere to the CDC’s guidelines, this would mean that they would have to go to bed at some time between 8:45 p.m. and 10:45 p.m.

However, most students do not have time to go to bed at 8:45 p.m. Students have homework, extracurriculars and aspects of their personal lives that prevent them from prioritizing sleep over other commitments.

A lack of sleep can cause a lack of focus at school and constant tiredness, which makes it even harder to focus. Even worse, Healthline states that potential side effects of sleep deprivation include high blood pressure, diabetes and heart attacks. MCPS has a responsibility to its students to create an environment that accommodates their mental and physical health and right now they are not properly addressing the clear danger caused by early start times.

Beginning in 2015, the high school starting time in MCPS was pushed back from 7:25 a.m. to 7:45 am, which is certainly a step in the right direction. However, those 20 minutes are not nearly enough to solve this problem.

During the 2020-21 school year, MCPS high schools began at 9 a.m. Many students supported this move, and it was a major push in the right direction to solving the sleep deprivation issue among teenagers.

The opposing side may tell you that 7:45 a.m. starts help students get ready for their adult years, but that is not necessarily true or even a good thing sometimes. Getting teeangers ready for adulthood has become an unfortunate cliche, as childhood is a time in one’s life that should be enjoyed to the full extent. Waking up early does not allow students to enjoy themselves to the full extent.

Another argument is that there are not enough bus drivers to start all schools later and there would not be enough buses to take all kids in elementary, middle and high to school efficiently. A raise in bus driver pay would encourage many more potential drivers which would solve this problem. A $2.68 million budget allows room for a slight raise for drivers, which is all it should take.

Many studies by the CDC show that later school starts are associated with better test scores, better grades and improved focus and self-regulation from middle and high school students.

An underlooked aspect of school starting too early is that it causes some students to rely on unhealthy habits such as excessive sugar in the morning. It also can lead to unhealthy caffeine drinking habits that are not good to start at an early age. These habits cause life-long issues that are hard to fix.

It is unacceptable to keep treating students like this and Montgomery County is powerful enough to make a change.