Half days only leave room for half of the learning 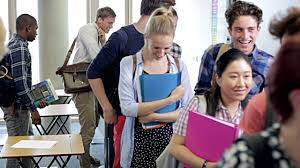 The current system in place for halddays leave students with no time for valuable learning experiences, which is a serious problem when reviewing or learning material for big tests.

With the first quarter of the MCPS 2019-2020 school year over and done with, many students rejoiced at the beginning of a new chapter for the year. Students were also happy to spend time at home, due to the fact that the normal half day that coincides with the quarter’s end was extended this year to include two more half days the following week. Originally a policy only for elementary schools, middle schools and high schools recently adopted the extra two days for parent-teacher conferences and administrative finalization work.

While most students aren’t complaining about these changes, they have traditionally come at a cost to education. During a typical half day, schedules are compressed so that each class is only 25 minutes long as opposed to the usual 45. Teachers often complain that the shortened periods don’t give enough time to get any meaningful work done.

“It’s well known that you just can’t get a full lesson out of a half day,” social studies teacher Scott Rivinius said. “You have to be realistic about what you plan to do, considering the lack of both time and student attention.”

“By the time we get supplies set up for use, it’s already time to clean them up,” arts teacher Tiffany Carmi said. “In essence, my classes can’t do any work on those days.” This is, of course, only applicable to the students that attend half days; many skip as in their minds, no valuable activity occurs during these schedules.

Half days are often necessary for both staff and students, but the current status quo is obviously not working as intended. There is, however, an alternative used rarely by MCPS. On occasion, when a pair of half days line up together, WCHS will simply go through half of its schedule on each day. The first half day takes students through periods one to four, and the second starts at fourth period again and goes through eighth. Each class still gets about the same amount of time in total, but in this case it’s unbroken and usable for extended activities.

“I really don’t care how a half day is organized,” senior Henri Roviera said. “I’m happy to go home early in either case.”

In fact, classes often assign less homework with the improved half day, since there is time in class to cover everything in the lesson. So why, then, do we not use this style for every half day? The obvious answer is that most half days aren’t in pairs, so this schedule would be stuttered and not always end in neat 2-day cycles. So what, though? A rotating schedule could solve this. A “morning” could be followed by an “afternoon ” day and back again over and over, regardless of if the days fall side by side on the calendar. Even without this solution, pairs don’t seem to be the issue. The two extra half days recently added to the schedule don’t follow this pattern, which seems to be used randomly and sporadically.

The new schedule would keep students on-task as well. Many WCHS students, upperclassmen especially, don’t come to class at all on half days because there isn’t often a good reason to show up. The new plan, allowing for full period classes, could be treated like regular days with tests and quizzes for whatever classes are had. No new work would have to be done on the teacher side, since morning and afternoon forms already exist on these assessments. This would likely reduce absences across the board for these days.

It’s time to address the issue of half days once and for all. As fun as they are, a new system needs to be instituted. Half days still contain valuable learning time, and the alternate system allows that time to be used effectively rather than wasted completely on periods where students barely have enough time to get fully engrossed in a lesson. This is the obvious solution to a long-standing problem; teachers can teach, students can learn and both still get to enjoy an early release.