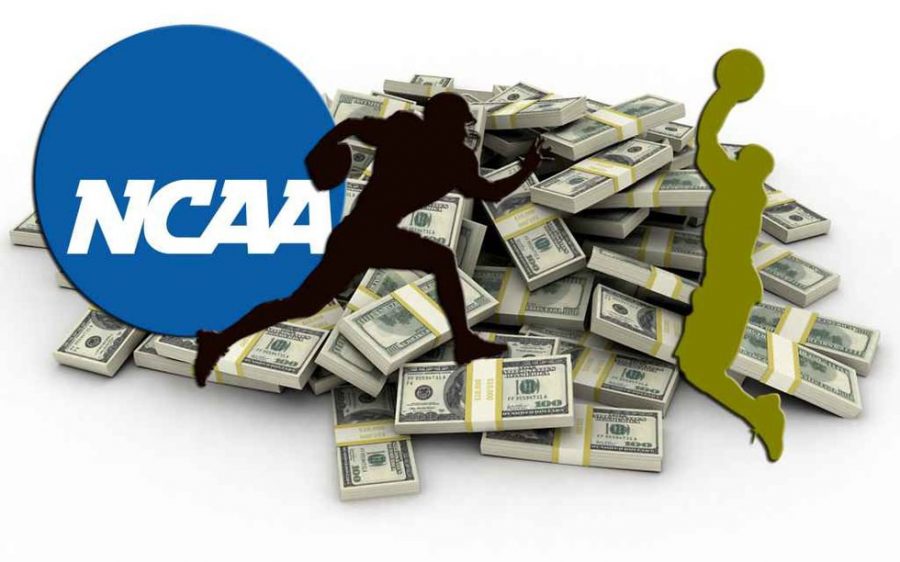 The NCAA logo with clip art of a football player and a baksteball player with money in the background to show how the NCAA has a corrupt policy robbing many athletes of their money that they should be entitled to.

Since the dawn of time college athletes being able to make money was forbidden by the NCAA. The debate has roared on and college athletes finally may be on the verge of compensation. The NCAA rules state that athletes are not allowed to be paid by their schools, make money off endorsements or have agents.

The NCAA makes billions of dollars a year from football games every weekend in the fall, basketball games almost daily throughout fall and winter and the March Madness tournament. It is unfair that these people get to control everything but leave the players to struggle for themselves.

Recently the tides have changed and the NCAA is seriously considering the idea of college athletes being entitled to compensation off their names. This means that schools are still forbidden to pay athletes, but athletes would be able to make money off jersey sales, autographs,meet and greets, etc.

Being a college athlete is a very hard job. You wake up workout, go to class, have practice, do homework and are expected to do the same thing everyday. Many Division 1 athletes are in school off of athletic scholarships and don’t have the money to finance themselves while in school. Athletes who are in school off an athletic scholarship can go broke because they are spending tons of money on stuff such as food and team fees and are left with no time to get a job. After a long day on the field and in the classroom the last thing anyone would want to do is to work a shift to make some money if they have the time.

While many believe athletes should be entitled to compensation many also believe that what makes college sports special is that the athletes can not make money. College athletes always seemed to have more integrity than professional athletes because they are not chasing contracts but their chasing rings. Not all professional athletes chase checks but a lot do and are in it for the money. College sports always have seemed to have a different atmosphere that seemed more intense and competitive.

But athletes being entitled to compensation would not diminish the integrity of NCAA sports. Since the schools would still be prohibited from paying their players, it makes virtually no difference. Athletes make money off their names and could do that at any school. Which means that the athletes wouldn’t pick a school based on how much money offered like free agency in the pro leagues. Athletes would have to make money off their own personal success on the field.  Not to mention all college athletes have one common goal – to make the league. Whether or not the rule is changed athletes must still perform at the same high level or their future goals and aspirations cannot be accomplished.

Being able to make money off their names is a huge win for athletes. The NCAA has always been a corrupt organization and this is a step in the right direction. It has never been fair how the league is able to make billions every year while the players are left with nothing except debt unless they are able to go pro, which only 1% do.