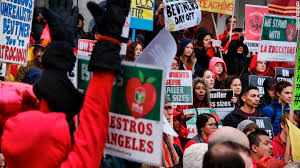 Teachers across the nation organize various strikes, hoping to create change within the education system.

Funding is decreasing for schools across the country, with no heating in classrooms, art and music programs being shut down, damaged textbooks and unfair wages for teachers. But does all of this allow teachers to take time out of instruction to protest for their own benefit?

Teacher strikes create tension between teachers, staff and parents, creating disruption throughout the school community. It ultimately breaks the sense of community instead of drawing people closer together and changes the way students perceive their teachers. Teachers should not be disrupting thousands of students and wasting tax money for pay increases; they can protest outside of school hours or try other peaceful ways instead of harming others in the process of getting benefits.

News of teacher strikes across the country has been prevalent for months now, with the most recent occurrence being in Denver, Colo. Feb. 11, where teachers striked to increase their current salary of $60,661.

According to Colorado Public Radio, there are almost 2,631 teachers not going to work, forcing schools to hire substitute teachers or have other staff cover jobs.

But many students know that substitute teachers never teach the same as normal teachers, causing students to lose valuable learning time. With the scramble to find teachers to substitute, it becomes very chaotic and often times students are provided with new teachers every week.

Teachers are not only protesting a pay raise. State education funding has been significantly cut, harming school quality and equity. Many schools have deteriorated, along with textbooks and basic supplies.

In Va., almost 20,000 teachers striked for nine days, Feb. 22, where their strike proved to be very effective.

According to Virginia Education Association, Va. teachers currently earn $9,218 less than the national average, ranking 34th in the country in teacher wages.

After their strikes, Va. legislators agreed to a 5 percent rise in salaries, not only for teachers but also state employees.

According to National Public Radio, the governor of Va. issued a long-term revenue fix to public employees’ insurance program.

When teachers go on strike during the school day, they aren’t getting paid, causing them to lose the money they say they can’t afford to lose. This logic doesn’t add up.

According to the Seattle Times, the Sept. 2018 teacher strikes in Washington state affected 65 districts and closed schools for 16 days. 573,000 children, almost half the kids in Washington that attend school, were affected by the closure.

Many students qualify for free or reduced meals in school because often times their families are not able to provide them with daily meals, causing them to rely on school meals. When schools are forced to close due to lack of teachers, students that depend on these meals will end up going hungry.

If schools were to be closed due to a teacher strike in Md., many students across the country would go hungry, including some at our own school.

Moreover, many parents with younger children that have to work find it really hard to scramble for childcare or a babysitter to take care of their kids during the day. In addition, many families cannot afford to pay for childcare or to miss days of work. This adds to the number of problems teacher strikes cause for families.

Some children, however, are not at risk of school closure. Students that are home schooled, attend religious private schools or take online courses are exempt from the politics surrounding the controversy of teacher strikes.

With all the missed school days, superintendents were forced to extend the school year and make up missed days.