Shorter school days should be considered for U.S. students 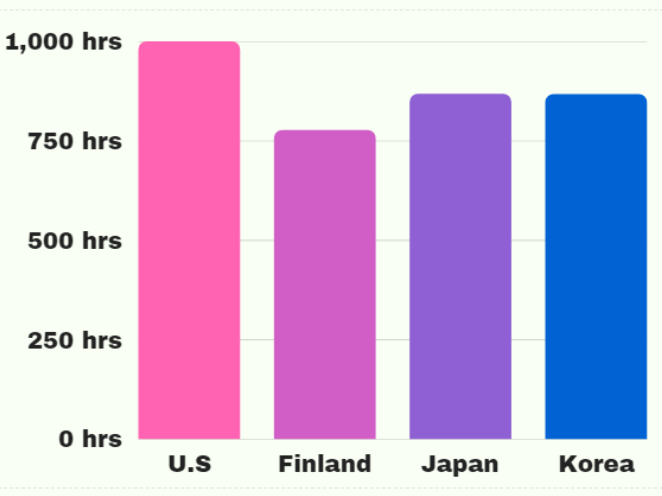 While the United States requires more hours in school a year than other nations (as shown above), their students still out-perform us academically.

There are only 24 hours in a day, and in CHS students’ busy schedules, we often wish there was more time in order to accomplish all that must get done.

Attending CHS takes up over six hours per day and around 1,080 hours per year in school. It does not have to be this way; students in many schools such as Finland have significantly fewer school hours that the U.S, which has a positive effect on their educational system.

Shorter school days are ultimately better for students, as they would be more successful in their learning experiences since they’d have less stress and more energy to focus in school.

According to Center for Public Education, in the U.S., most states require their students to spend between 175 and 180 days in school, which can add up to between 900 to 1,000 instructional hours per year. But these extensive hours do not necessarily translate to a higher quality education.

Countries such as Korea, Finland and Japan are all considered high-performing countries based on their students’ scores on international tests. They require their middle school students to spend between 770-870 hours in school each year, which is a stark contrast to the thousands of hours required in “high performing” U.S schools.

According to a 2014 CNN article, Finland has one of the world’s best educational system, and their school system greatly differs from the United States’. Every class must be followed by a 15-minute recess break so children can spend time outside on their own activities. Additionally, they don’t test their students’ nearly as much as American schools.

Quality of education in the United States is largely defined by testing data rather than practical appliance of the material in other countries. High schools in Finland don’t require students to take standardized tests, excluding one they take during their senior year.

Finnish schools not only focus on academics, but they also like to have their students practice real-life skills such as sewing, cooking, cleaning, woodworking and other marketable skills that allows students to become skilled individuals ready for real world experiences.

Despite these major differences, based on a 2014 CNN article, Finnish students consistently score well in the Program for International Student Assessment (PISA) for reading, mathematics and science. The 2012 PISA results conclude that in these three subjects combined, Finland ranks third after Korea and Japan. In comparison, American students’ combined performance in reading, mathematics and science places the United States at 21st.

Aside from the different school systems in these countries, school hours greatly impact the performance of the students. Longer school days may be seen as a positive, considering students would have more learning hours to better their education. Having less hours may place more stress on students, as they’d have less time to learn and comprehend the same material that could be taught on a longer school day. Having longer school days allows students to have more time to learn and complete the given material, ask additional questions and engage in the class for a longer period of time, resulting in less homework.

Shorter school hours, however, are in the best interest of students, teachers and administrators, as they would have more free time outside of school for extracurricular activities, work or relaxation time.

Students at CHS are surrounded by an academically competitive environment, which can often be stressful for students’ to balance school work with their extracurricular activities and social lives. Longer days mean students will be spending longer hours in a school environment, only resulting in more stress and less energy to do school work. Additionally, students will have less time and energy to do any activities outside of school.

Longer hours in school aren’t necessary for students’ success, as seen in countries such as Korea, Finland and Japan. With shorter school days, students will in turn will have less stress and more time to focus on themselves.