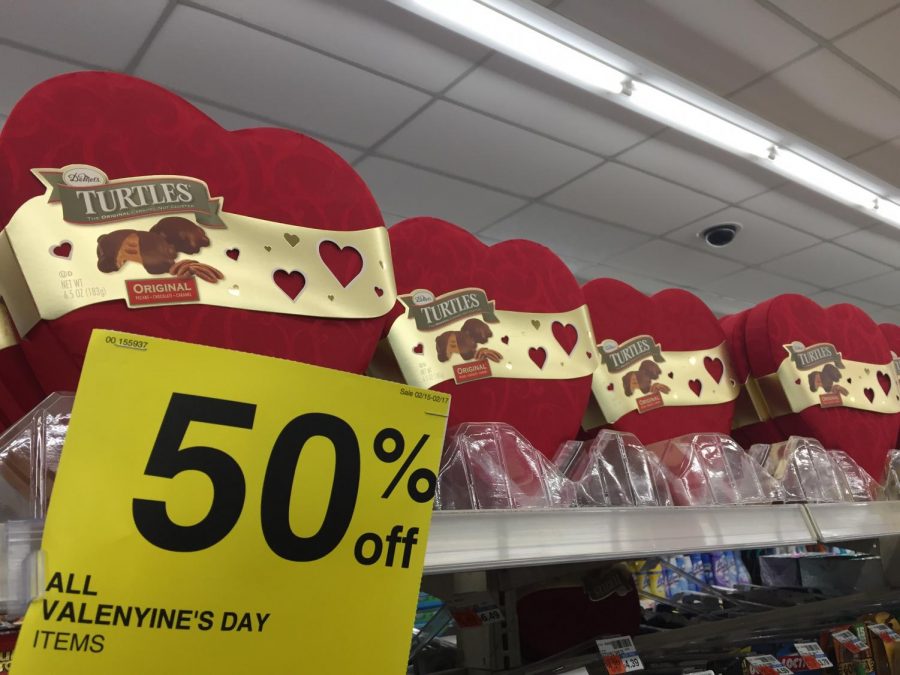 While Valentine's Day spending is in the billions, manufacturers tend to overproduce leading to mass sales shortly after the holiday. Teens opt to spend their money on new traditions such as Galentine's Day.

In the past, Valentine’s Day entailed heart decorations, decorated cards from classmates and class parties with candy galore. However, in high school, Valentine’s Day is a completely different experience.

Instead of feeling the same excitement as they did when they were younger, teens’ definition of Valentine’s Day has become so distorted that it is viewed only as a holiday for people in relationships. Even though it is a popular day for romance, the purpose of Valentine’s Day is not only to glorify people who have a partner. Too many teens believe that this holiday is an unintended punishment for being single, which turns leads to bitter and pessimistic sentiments come Feb. CHS students should remember that Valentine’s Day is simply a celebration of love, no matter what kind.

According to a National Retail Federation survey, total spending was expected to reach $19.6 billion, up from $18.2 billion last year. So, even though teenagers believe that it is cool to hate Valentine’s Day because everyone does, the numbers beg to differ.

Even if one does not have a significant other, there are still fun ways to spend Valentine’s Day. Simply hanging out with friends is in the spirit of this holiday by expressing love and appreciation for your friends. Galentine’s Day, a day when girls celebrate with their girlfriends, is a great way for women to appreciate and love themselves.

According to a Feb. 2017 Atlantic article, Galentine’s Day is becoming increasingly popular among women and many businesses, such as Target, are jumping on the bandwagon of this new spin on Valentine’s Day.
Many also have a negative opinion on Valentine’s Day due to its commercialization. It can feel like Valentine’s Day has been co-opted into a holiday solely about gifts and lavish purchases.

Many holidays are criticized for this reason, and while it is true that sales do spike during the holidays, the underlying message of the holiday has nothing to do with it.

According to a 2008 Science Magazine article, when one spends more money and gives more to other people, it has been proven that they will feel happier for a longer period of time. Giving gifts makes one feel happier and if one does not want to spend money, they can make something homemade.

Valentine’s Day also has a bad reputation because of how it penalizes people in relationships as well. People feel pressured to buy the perfect gift, or feel as if they are forced to express their love in a quantized and commercial way. They are stressed about how they are going to make Valentine’s Day special for their significant other.

This is just a matter of maturity: if one truly loves or enjoys their partner’s company and are on the same page, then it should not matter how extravagant their gift is. Giving gifts, whether they are bought or do-it-yourself, is simply a nice act to perform for someone, and if it is a source of complaint, then it is completely opposite of the point of giving in the first place.

Valentine’s Day was once a holiday that CHS students would look forward to in elementary school. Now, it is something that teens dread, but for what reason? It promotes the love and appreciation of people who are important to you, and has no intention of taunting one’s relationship status. There are also plenty of ways single people can celebrate this holiday with friends, such as participating in Galentine’s Day, or just spending time with loved ones. It is an unjust irony that a holiday that represents love is met with such uncalled for hate.