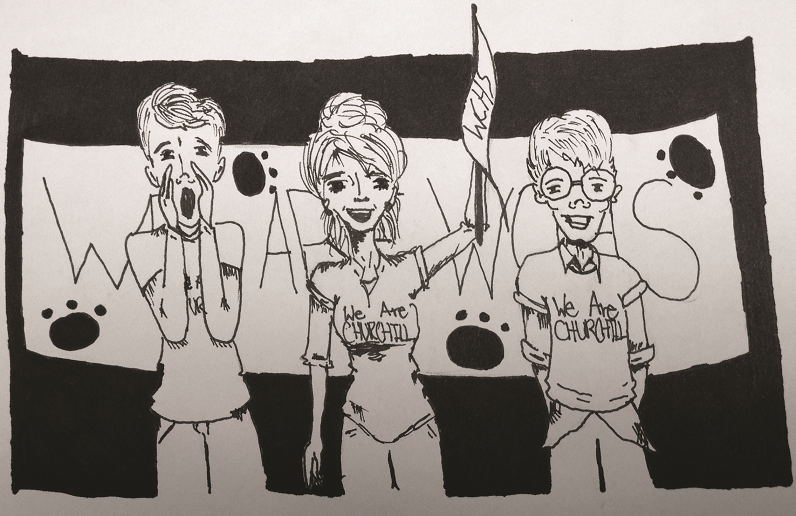 CHS was yet again ranked the number one high school in Maryland based off reading and math scores, college readiness, and student-to-teacher ratio. Yet, despite our high standings, we rank low when it comes to widespread school spirit.

If someone were to walk into a CHS classroom and ask for a show of hands of how many people had school spirit, maybe five people would raise their hands. What is even worse, however, is the only slightly higher number of hands that would go up if someone were to ask if we should work on having more school spirit.

According to a recent YouTube video, the second best school in the state, Walt Whitman, has plenty of school spirit. Its students put together a lip-synch video to Katy Perry’s “Roar” about how much money they raised to fight cancer, and it featured an abundance of student participation.

According to senior Kerry Billings, CHS could never do a similar video because the students lack the spirit and unity.

CHS students work hard and the school sets an atmosphere where academics are crucial, which is good, because school is for learning. Sometimes, however, students and teachers focus too much on getting that A.

There are over 2,100 students trying to get through these halls every day, all learning and working for our future. Yet, instead of uniting from time to time, we all just stay focused on beating each other on the next test.

Students spend too much time studying or worrying about their numerous AP classes. Sometimes, they need to just take a break. Instead of forming an environment where kids want to have fun together, we form an environment where students are constantly competing to be the best student. Kids have come to consider cheating part of the culture because the appearance of academic success is paramount to them.

The stress on academics and the competitive nature of students are not the only things holding CHS students away from spirit, it is also the cliques.

According to senior Hayley Mulhern, the school is very “cliquey” and it has come to the point where kids just accept it because of fear of trying to break boundaries that seem set in stone.

In the Whitman video, students from all different teams, clubs, and cliques came together to show off their Whitman Pride.

If students only care what their friends are doing, then why would they get excited for school events?

Instead of accepting the cliques or spending all their time working, students should take some time to unite as a school. Rather than having half-hearted displays of acceptance of the fact that we go to CHS, students should be bursting with pride.

According to junior Katie Kidney, it is not that we have no school spirit, the school has actually come together recently when students united in the aftermath of Evan Rosenstock’s passing last May. Kidney said that people base spirit on trivial things, like who wears leg warmers to represent the ‘80s on decades day.

In some ways she is right, but other times, our showing of pride is dismal. No more should we have pathetic student sections at any sport, even if we are not winning.

Freshman Sofia Bruno was really excited for her first football game, but it was a letdown because no one but some upper classmen seemed to care at all about the game.

We should be proud of all our athletes, coaches, and student performers and the fact that they represent CHS. We should show support.

Students should be able to proudly say, “I go to Churchill.” The students should want a sense of school pride, because in a way we are all in the same boat. We are all kids trying to get through high school and enjoy doing it.

We have a great school. We should show it at every school event and proudly wear our CHS garb.

Shout it with pride!