‘Hunger Games’ not unlike college process 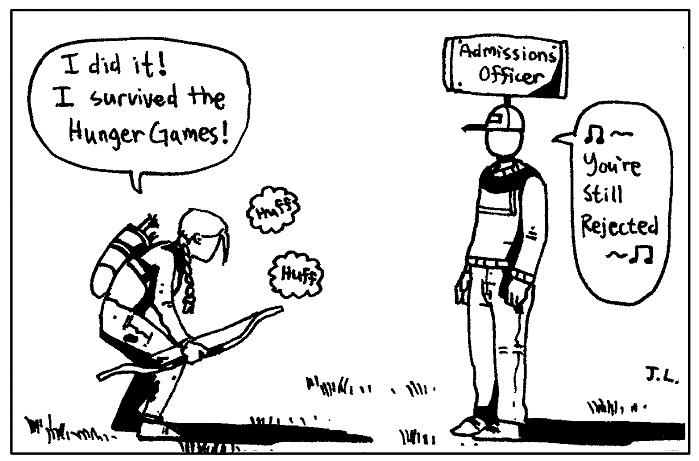 As parents and teachers sat down at movie theaters to see what all the fuss was about, they were nothing short of appalled at the scenes forced into their heads by the film adaptation of Suzanne Collins’ trilogy, The Hunger Games. They were revolted by the glorification of teenagers slaughtering each other, horrified by the heartless officials who ran this awful dystopia and sickened by a society divided into nameless districts whose only source of pride lay in producing a champion of the annual Hunger Games.

The reason The Hunger Games has been Number 1 in the box office for four straight weeks and Collins’ books have gone viral among America’s youth, from middle school to college, is that The Hunger Games describes what today’s students are being forced through. The story of Katniss Everdeen is the story of the American educational and college application process.

Upon volunteering as the female to represent District 12 in the upcoming Hunger Games, Katniss learns that the over-bearing central government’s irritatingly repetitive wish “May the odds be ever in your favor” does not hold true in the least sense.

She discovers that competitors from the richer Districts 1 and 2, who train their whole lives for the honor to compete in the Games, have a clear advantage which other competitors do not enjoy. Katniss’ poor mining District 12 enjoys no such preferential treatment, forcing her to rely solely on past experience and the skills she develops on her own.

In the same way, colleges love to stress the equality with which each student’s application is considered. But this is not the case. Wealthier students are allowed the opportunity to vastly improve SAT and ACT scores through services like PrepMatters and Capital Educators, a luxury that poorer, albeit equally intelligent students often cannot afford.

According to an April 10 Wall Street Journal article, once given a spot on a college waitlist, students who do not need financial assistance to attend a college are more likely to be accepted than students who apply for financial aid. Colleges pick their winners too.

Katniss finds that in order to please sponsors, whose aid is essential for survival in the Games, she has to be something other than herself. As her mentor warns, the true Katniss, withdrawn and stubborn, cannot win sponsors; she has no choice but to play the sponsors’ game, reluctantly putting on a façade of bubbly outgoingness for her pre-games interview.

The college essay rivals the alarming depersonalization of this interview. Originally created as a means for colleges to learn a little about the personal attributes of their applicants, the essay has devolved into an overdramatized Photoshopped image of the applicant.

Rather than advising students to expose their true characteristics, school counselors urge students to change their appearance and depict themselves in a manner that the counselors believe will give them an edge. Students dress themselves with fake premises, like Katniss sporting fake flames that erupt from her dress.

Finally, the contestants must exhibit their skills in a limited setting, where, observed by judges, each is assigned a number indicating the likelihood he or she has at survival. Each competitor chooses from an array of weapons to brandish. If it weren’t for Katniss breaking the rules of this test to catch the attention of the judges, her skills would have been grossly underestimated.

For college applicants, GPA and the SAT allow limited room to display intelligence as they only measure student ability to get good grades and to practice enough for a retakable test. Naviance, an online college admissions resource, can predict with remarkable certainty the likelihood of being accepted into a certain college given only one’s SAT scores and cumulative GPA. By strictly defining their idea of intelligence, colleges underestimate the potential of students whose strengths lie in creativity or social skills.

In The Hunger Games, fear of being chosen to compete dominates the lives of the district’s youth. While sons and daughters are conscripted to almost guaranteed death for the empty purpose of maintaining social order, citizens around the world gather and cheer at the commencement of the bloodshed.

While certainly less dire than the prospect of being murdered at the hands of friends for the amusement of an authoritative central government, the process Americans are forced through by parents and school officials bears remarkable similarities to the storyline adored by students and feared by parents.

The federal government dictates the better part of the first two decades of every American’s life, frantically preparing them for college so that they might bring pride to the country. Like providing the Hunger Games champion with his or her spoils—a new home and piles of money, the government leads students along with promises of success and wealth for those who succeed in entering an elite college.

Parents and teachers quickly step in sync, coaching innocent kids to focus their lives on the ultimate goal of being admitted into a respectable school, taking vain pride when their students, sons and daughters successfully outstrip their peers in this ultimate contest for what? Finding one’s career choice?

Trying desperately to forget the disturbing images from the movie, parents drove home in their cars covered with “Ivy League Mom” stickers, and teachers returned to school brainstorming ideas how best to prepare their students for college. Yet one question should have lingered in their consciousness, something they could not shake: Why? What message in this story could possibly appeal to America’s youth so as to justify the awful violence exhibited in Collins’ books?