A play-by-play of Super Bowl XLVI 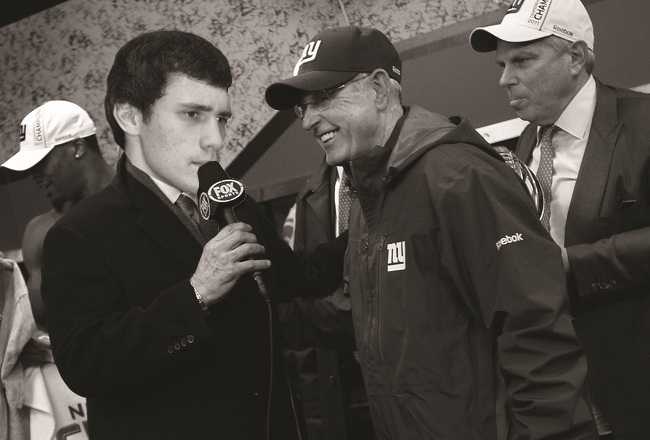 America is immune to the global soccer craze. We pretend to care about soccer once every four years, but the effort is futile. Better than the World Cup, the annual Super Bowl is a tradition exclusive to America. After creating a station of wings, chips, pizza and refreshments, I kept a diary of the various pop culture and sport happenings of the big day. (All times are EST)

6:40 p.m. – It’s the first slate of commercials after the first possession of the game. Bud Light has patented the format of turning a cliché into a claim of the originality of their beer. The cliché was “turning platinum into gold.” The ad campaign of spinning a cliché was once original but has become ineffective and overused.

6:47 – Eli Manning completed a pass to Bear Pascoe. Is there a name more badass than Bear? The only other Bear I know is survivalist Bear Grylls, whom I saw eat a live fish while spending three days in the Alaskan bush. The way in which Pascoe just shed off Patriot tacklers has cemented Bear as the most badass American name. And yes, I’m assuming Bear is an American name.

7:01 – Exercising discipline and not going to the GoDaddy website.

7:07 – Doritos understands how to use animals in their commercials without having them talk. The dog commercial this year and the mouse one last year are Super Bowl commercial classics. A lesson to advertisers: save personification for literature.

7:17 – Vince Wilfork, the defensive nose tackle for the New England Patriots, is why other countries mock our culture. Anytime a man with a pot belly and a weight above 300 pounds is labeled an athlete, there might be something wrong. However, as a society which has idolized Babe Ruth, we must embrace the American way.

7:47 – If Brandon Jacobs is the kid who hit puberty early, Danny Woodhead is that quiet kid, you expect might be a stoner, who manages to elude everyone when he plays tag or football. Jacobs and Woodhead are polarized running backs who are helping to make this a hell of an interesting Super Bowl.

8:04 – Madonna’s back up dancers are carrying her performance. Her singing comes across as very monotone, and she doesn’t seem into it. She seems very concerned about her image and is playing it very conservative. I’m 99 percent sure she’s lip-synching because of this.

8:09 – Who OK’d this? Madonna’s collaboration with Nicki Minaj where “Madonna” was repeated about 99 times strikes me as subliminal messaging.

8:19 – That Clint Eastwood commercial gave me chills. Bear might be the most badass name, but Eastwood is the only person who can apply for Social Security checks and make me cower in fear. Any man who can be badass in his 80s has earned legendary stature.

8:45 – In the Acura commercial with Jerry Seinfeld, a jet pack-wielding Jay Leno looked too much like the villain from The Incredibles.

9:06 – The Matthew Broderick CRV commercial has given me all sorts of second semester senior aspirations. Life moves pretty fast, and I plan on stopping to look around. I’m thinking a Ferris Bueller 21st Century day off is in order.

9:27 – I really want to write a paragraph making fun of Tom Brady. His hair style last year, his lack of mobility outside of the pocket, and his voice, which sounds like a teenage girl, are all too easy to mock. However, I imagine him going home after a tough loss, battered and bruised, to his very attractive wife’s warm embrace. On second thought, I think Tom Brady has solidified his spot as one of the coolest athletes of our generation.

9:40 – Two minute warning, and the Patriots are up two. I couldn’t have asked for more. I’m not going to risk speculating what will happen next.

9:42 – Screw it, I’m calling missed field goal or turnover by the Giants. A special teams player costing his team the game has been a great theme for the 2011 NFL playoffs.
Final Score: Giants- 21 Patriots- 17

9:53 – That was a closer call than Gordon Hayward’s half court heave. Well worth the price of admission nonetheless.
Super Bowl XLVI was epic. The commercials were great, and the game was an instant classic. If there was a better or memorable half time show, it would’ve been my favorite Super Bowl of all time.

Final thoughts: Eli might be the better Manning. I remember when he was called out for saying he was a better quarterback than Tom Brady in the preseason. Brady has the beautiful bride to come home to, but Eli’s the one going to Disney World—I can’t decide which one I’d rather end up with, an ironic aspect to manhood. In conclusion, karma is real. The Patriots had it coming since they were busted for cheating. Cheaters never prosper.