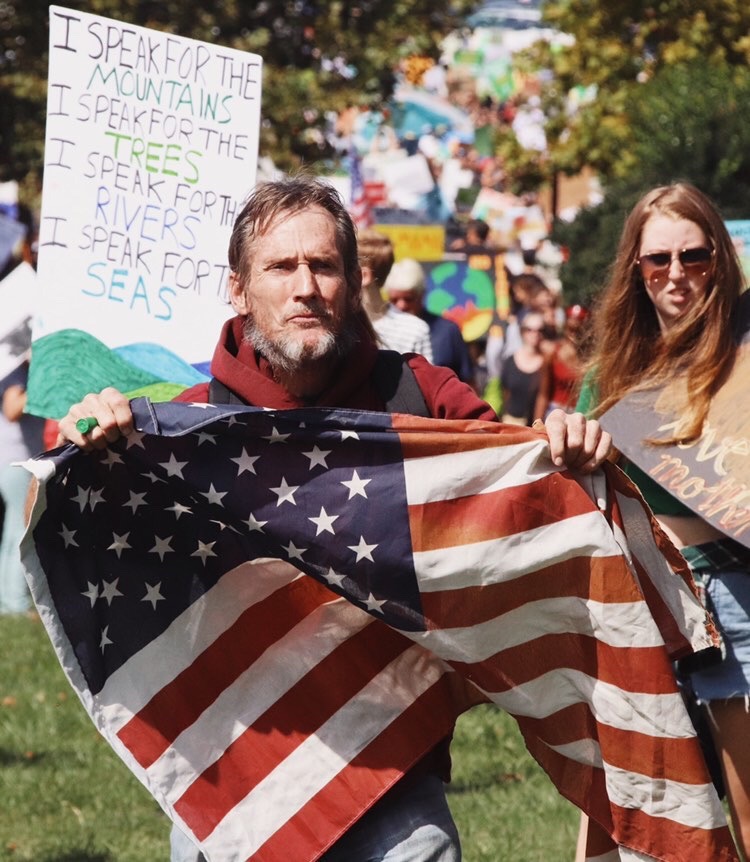 Senior Hannah Roberts captures photos of activists at the Climate Strike this past Sept 20 through her photography. The Climate Strike is one of the many series of strikes and protests to demand action against the impending dangers of climate change.

The Global Youth Climate Strike inspired more than 4 million people worldwide to strike on Sept. 20 to advocate for stronger legislation and regulation.

“I started being active very recently, but I have been going to rallies since I was little,” Geiger said.

Climate change doesn’t only refer to the warming of the earth. It means wildfires, heat waves, floods, earthquakes and other natural disasters, damaging the economy and causing food shortages for millions of people worldwide.

“People of color and low income families are disproportionately affected by climate change because they are unable to recover, an important fact that is often overlooked,” Geiger said. “People around the globe should be advocating for legislation because this crisis is affecting, and will continue to affect all of us.”

Influenced by the 16-year-old Swedish environmental activist, Greta Thunberg, millions of students were inspired to take part in the strike and advocate for stronger legislation on the eve of the climate summit in New York on Sept. 23.

“As citizens, it’s our job to influence these politicians and force them to take action,” junior and Churchill for Climate club president Claire Fan said. “Politicians must work together to pass legislation and make treaties.”

While the realities of climate change are becoming more and more known, it still isn’t as frequently talked about as other political issues. In the 2016 presidential election, only five minutes and 27seconds were spent discussing it in the debates.

“Living in a privileged part of the world, we don’t see as much first hand damage and aren’t as affected,” Fan said. “Almost every day there’s a new story on the news about the earth dying. If we don’t act soon, climate change will be irreversible and the earth will deteriorate to the point where it is  completely unable to support humans.”

According to The Youth Climate Strike website, their goal is to make the Green New Deal– a plan to make the country 100 percent renewable energy by 2030– pass in congress, and to make climate change declared as a national emergency. Additionally, they hope to make learning about climate change compulsory education in grades kindergarten through eighth grade and prevent any future fossil fuel projects.

“The Green New Deal will put emphasis on clean energy, which is an important step in saving our planet, and it will create good quality jobs that can help our future,” Geiger said. “It may not be a solution for everything, but our legislators need to take action and face the climate crisis head on.”

The United Nations Framework Convention on Climate Change (UNFCC) held a conference in 2018 and came up with an 11-year deadline on the Paris Agreement to limit the number of fossil fuels by 45 percent to keep the temperature from rising above 1.5 degrees Celsius.

However, according to a July 2019 BBC news article, scientists have stated that as of now, only 18 months remain to stop irreversible climate change effects.

”Climate change will end up affecting everybody on the planet and the generations that come after us,” Fan said. “It’s our responsibility to pass the earth on to future generations in the same healthy condition it was given to us in. Fixing the earth should be a global effort.”

Even small steps, like buying sustainably produced products, walking instead of driving, and being conscious of buying things with lots of plastic packaging will make significant differences.

“Activism is the most important because that’s how we can influence and inspire politicians to make actual change,” Fan said. “Remember that the little things add up to make a difference.”

Geiger and others hope to show legislators the importance and urgency of climate change legislation.

“Our very near future, as well as the future of our children is in jeopardy and now is the only chance we have to act,” Geiger said. “We are showing the world what’s coming and forcing congresspeople to choose between fossil fuel money and the well being of our world.”