Early voter registration allows students to prepare for the future 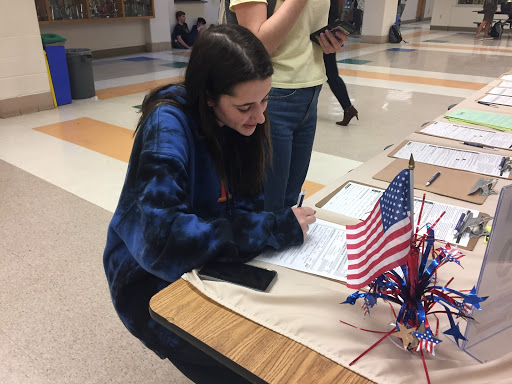 Junior Liz Porter is registering to vote at WCHS during lunch. The Montgomery County Board of Elections registered students three days during lunch.

For three days at lunch, the Montgomery County Board of Education had a table at WCHS to allow students over the age of 16 the opportunity to register to vote.

While you have to be 18 to vote, Maryland citizens can register when they turn 16. Maryland joined 11 other states, including California, Florida, and D. C., in allowing 16 year olds to register.

Junior Liz Porter registered to vote with her friend during lunch. It was important to her to both register herself, and get her friend to register.

“It’s our future that is gonna be affected by the next presidential election,” Porter said. “It’s our adulthood that we’re gonna have to deal with it. [On some issues] it doesn’t affect them [older generations].”

While she will not be able to vote in the 2020 election, Porter is thinking ahead to future elections where she will be eligible to participate.

“It’s important to me to vote,” Porter said. “If we don’t vote, if students don’t vote, then there is not going to be change. Silence is never the answer.”

Sophomore Forge Pak also registered to vote. He is not able to vote this year, but had a different philosophy of thinking about registering.

“I just wanted to get it out of the way so I wouldn’t forget about it” Pak said. “It’s just one of those things that I feel good getting out of the way.”

“We’d like to have the students get involved in a process that’s ongoing,” Coffer said. “If we inform them early on the importance of voting and so forth, later on they too will become workers and voters and recognize the importance in doing so. What the student’s getting out of this is a chance to have their voice heard, that is what voting is about.”

“Getting involved as early as possible is good,” Coffer said. “ If they learn the processes prior to, by the time they do get to the age of 18 – able to vote – they’ll make some idea. When you see someone or hear various information or news about democracy, you’ll have some idea of what democracy is.”

In order to register, students needed a type of ID – driver’s licenses or learners permit qualifies – and the last four digits of their social security number. If they were under 18, they needed to get a form signed by their parents in order to allow them to register.

“We think coming to the school, they will be able to see it [democracy in action],” Coffer said. “When they hear it on the news, they’ll have an idea. We also have some students who work at the election polls. They’re not old enough to vote, of course, but they too get a chance to be involved  in what their community choices are and why people make the choices they do.”

Once students fill out the form, it gets processed by the B. O. E., and when it is official, students receive an email. Registered voters had to pick a political party, which led to some tough decisions for students.

“My dad is a Republican,” Porter said. “My mom is a Democrat. I see both sides at home. My dad is usually right…but he lets us have our own opinions on politics.”

In addition, students can become election day judges. This requires them to go to polling places and help with the election day process. They can get up to $210 or 25 SSL hours.

“Often times that kind of gives them that sense of being involved,” Coffer said. “They begin to realize the importance of democracy at an early age. It’s no longer a foreign language to them. It’s something they can say, ‘they came to my school and I read some of the pamphlets and I volunteered and I learned something about the election process.’”

Registering to vote was an experience that many students enjoyed. You can register to vote online through the B. O. E. website.

“Doing it at school made it so easy,” Porter said. “I got to do it with my friends. It was just so fun and awesome and simple. Just to do it. Get it out of the way. It makes me feel like an adult. If I register to vote, maybe my friends will do it. I’m happy to do it.”