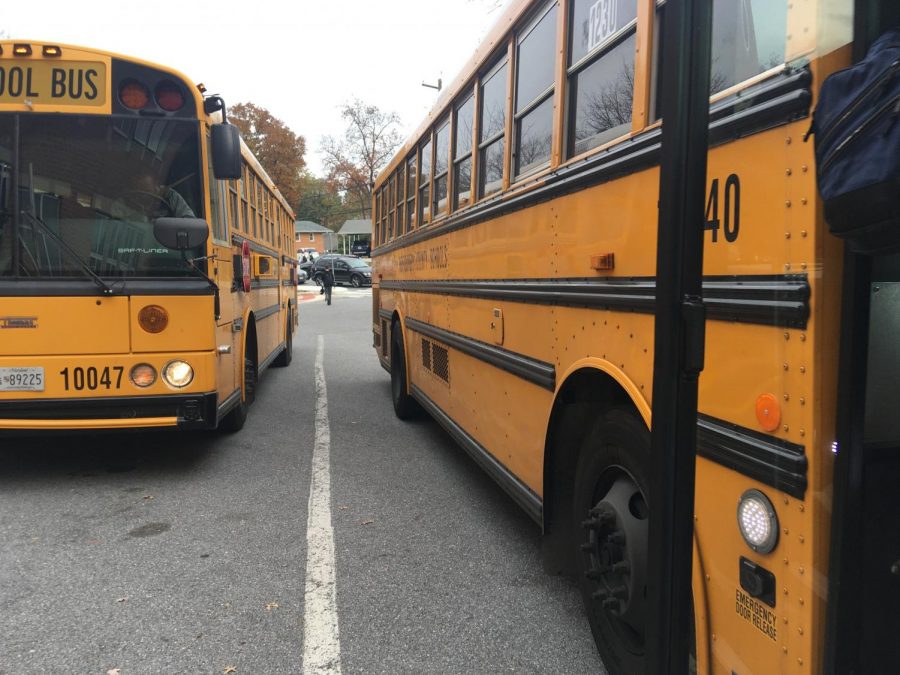 On any given morning, WCHS students come to school on buses. Buses would come later, if school start times are pushed back.

By Jeremy Fredricks and Ari Dimitoglou

For students in California public high schools, start time will be later beginning in the 2022-2023 school year. After Governor Gavin Newson signed a law for later start times, California will become the first state to legislative start times for public schools with high schools starting at 8:30 AM.

According to a 2019 CBS News article, “later start times help combat sleep deprivation in teens, who naturally fall asleep later than their parents would like, improve academic success, attendance, mental health and cut sleep-related car accidents. Students perform better if they can sleep in.”

Some students support the California rule and hope it is initiated in Maryland, as teenagers need at least nine hours of sleep each night.

“I would like to start later than 8:30 am.,” junior Danny Hyatt said. “I like to sleep in. It means I can get the daily required amount of sleep, which I do not typically get. I usually only get half of that.I think I would be less tired in the mornings and less stressed.”

Hyatt plays for the varsity soccer team and has afternoon practice most days. Sports practices can end as late as 9:30 pm., which may not allow students to complete all their homework.

WCHS students believe that the extra hour will be beneficial for sleep routines. One of the biggest reasons that California issued the law was because students are less likely to be depressed or suicidal with more sleep.

According to an 2019 Ed Source, “when teens sleep longer they’re healthier, perform better in school and are less prone to depression or suicidal thoughts.”

“Anytime people get more sleep, they are more productive, healthy, happier and stronger,” Rosenthal said. “Students should go to bed earlier because scientifically, children of a certain age need more sleep. I am not sure if pushing the time back would force kids to go to sleep earlier.”

However, some teachers and students are not fans of starting later. Morning traffic is a major concern for them.

“Traffic is bad enough already in the morning and seems to be getting worse,” Honors Chemistry teacher Clinton Sandford said. “Even if we had a delayed opening for one hour due to a winter advisory warning, the traffic would still be really bad.”

For students with after school activities and transportation accommodations, getting home later in the evening might present problems for students and teachers. Traffic is a very prevalent issue that affects many students, like sophomore Phoebe Hong.

“Since there is a common rush hour,later start times might cause there to be a traffic jam,” Hong said. “Everyone would be getting out of work and school at the same time.”

Honors English 10 teacher Samantha McEvoy agrees and also has another potential reason why MCPS or Maryland would not make the change.

“I think there are two major reasons,” McEvoy said.”Teenagers are tried to be withheld from the road as much as possible during rush hour.Students in our country who are responsible for taking care of siblings. It is pretty important that they are there, if their parents need them to be.”

Allowing after school activities to end later increases the likelihood of car accidents because some students and parents would be driving home in the dark. Getting out of school later would also pose a challenge for public transportation services in Montgomery County, as well as alter afternoon school bus route schedules, as different areas may experience more traffic than others.

“Teachers would have to stay at school later,” Sandford said. “Today’s students stay up way too late and need to get to sleep earlier. We already start school late. I think the previous change probably helped the students, but starting even later would not be a good idea.”

According to the MCPS Board of Education, times have not really changed for many years in MCPS high schools. For at least the last decade and a half, high schools started at 7:25 am., and more recently at 7:45 am. Rosenthal usually arrives to school by 6:30 am.

“I would not come at 6 am.,” Rosenthal said. “I would actually get more sleep. I probably would have gone to sleep later, knowing I did not have to go to school until later.”

WCHS sophomore Kaveh Farahifar wants the school day to start at 8:30 am. because he does not like how early school is. Like some students, Farahifar gets up when it is still dark out, making him want to sleep in more.

“I don’t like how early school is in the morning,” Farahifar said. “I get up when it is still dark out. It makes me want to sleep more. I need that extra hour of sleep. I would find it okay if school ended at 3:30 pm., instead of 2:30 pm. Everything would be pushed back an hour.”

In the end, California high schools will begin at 8:30 am. starting in 2022-2023, which could potentially start a trend that MCPS or Maryland could follow. Some students and teachers would support it for the extra sleep. Other students and teachers would not support it because the extra hour could be abused, and the danger of students on the road during rush hour would increase.