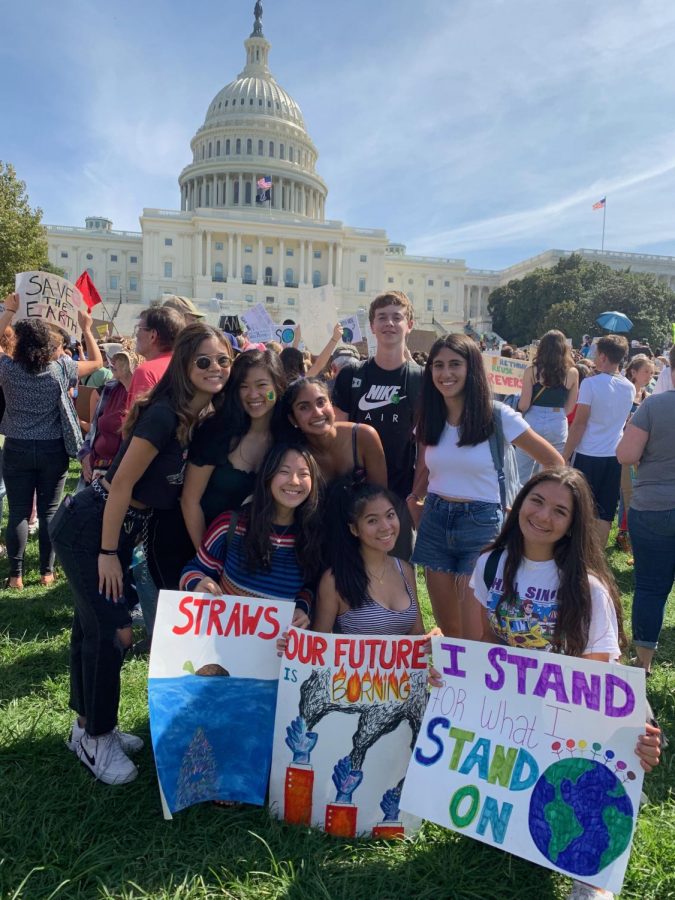 Just outside the Capitol stands a group of WCHS juniors after walking out of school on Friday, Sept. 20, the day of the D.C. Climate Strike. Holding their handmade posters, they take their picture to commemorate the day they fought for environmental regulation, a controversy similar to that being fought in Brazil regarding the Amazon.

The ongoing fires in the Amazon are a prime example of an environmental crisis that has been fueled by a political and economic agenda. As the Amazon is the most biodiverse area on earth and additionally provides approximately six to nine percent of the world’s oxygen, its current undoing should be relevant to every single individual across the globe. Undoubtedly, the earth is something we all have in common and have the opportunity to take care of, yet it still burns to the ground.

According to an Aug. 21, 2019 article by global news site OpenDemocracy, reporter Manuella Libardi mentions leaked documents regarding President Bolsonaro of Brazil and his plans for a large portion of the Amazon under the jurisdiction of Brazil, “part of the government’s strategy of circumventing this globalist campaign is to depreciate the relevance and voices of minorities that live in the region, transforming them into enemies.”

Bolsonaro’s ideal approach towards a greater economy prioritizes the whole of Brazil rather than ensuring rights to subgroups, all in a fashion to solely benefit an economy and reject its people. As the issue of the Amazon fires is widely sponsored by these ideals within current Brazilian politics, one key idea planted in the heat of the situation is the struggle for the basic human right to some sort of acknowledgement from the government.

According to Robinson Meyer’s Aug. 24, 2019 article in The Atlantic, Meyer reports the Brazilian president’s intentions. Since his presidency, Bolsonaro has been absent from organized UN climate talks and has openly desired an authoritarian presence to omit any protection over the Amazon. However, even this was foreseen before Bolsonaro’s presidency.

“During his campaign, he promised to weaken the Amazon’s environmental protections—which have been effective at reducing deforestation for the past two decades—and open up the rainforest to economic development,” Meyer said.

Although the Amazon may appear to have nothing to do with us in the U.S, AP Human Geography and Honors U.S. History Nicole Van Tassel sees a commonality between the Amazon fires and our history.

“The indigenous people of the Amazon are being kicked out of their land, it’s sort of like our Native Americans in the U.S. and how we pushed them further out of their land once we found it desirable for its gold, silver and all these resources,” VanTassel said. “Not only is it a human rights violation, but it’s also environmentally unfriendly as he destroys his environment at the cost of humans; if you’re going to take their land, where are you going to put them?”

In addition to the issues regarding human rights in the Amazon, Bolsonaro’s plan to prioritize Brazilian economic progression has spiked rage across the globe, especially for environmentalists.

The recent Global Climate Strikes, led by Swedish 16 year old Greta Thunberg, has so far gathered millions of participants from all over the world. Throughout all 7 countries, there are 2,500 events in more than 163 countries that are to be conducted. Though the main reason for the strike was not specific to the Amazon, nonetheless, it is an act to help gain a greater appreciation towards our environment to prevent it from further declining.

As of Friday, Sept. 20, WCHS students had walked out to bring more attention to the environment and the imminent dangers bound to happen environmentally unless real legislation on environmental conservation were to be passed.

Junior Anusha Anand, had attended the D.C. event on the Friday of the walkout with a purpose—the purpose of contributing to the youth voice regarding current political and environmental controversy.

“The goal of the Climate Strike is to put pressure on all world leaders to create change and raise awareness through a global strike, and the turnout from all around the world has been staggering,” Anand said. “I wanted to go to the climate strike because I know how important and effective youth-led activism is right now, and with the current environmental crisis, I felt like I needed to do something to help.”

Additionally, Anand claims that based off of her studies in school, the current events regarding the Brazilian rainforests don’t stray too far from what she has so far learned in AP Environmental Science.

“In class, we learn about how humans often only think about the short term benefits and ignore the long term environmental losses,” Anand said. “Not protecting the Amazon will leave negative effects in all societies, so we have to acknowledge that there must be a shift in our mindsets to set the environment as a priority.”

The degree in which the Amazon fires burn today are at an alarming rate, and it does awaken a greater sense of urge from more and more people everyday due to the Amazon contributing to a decent percentage of the world’s oxygen.

“I think it’s going to become a bigger deal, especially if Bolsonaro of Brazil continues down this road,” VanTassel said. “If he continues burning away the Amazon, I think environmentalists are going to get involved, on top of that you’re going to get human rights people.”

All in all, there has been greater attention to global environmental actions. In fact, the number of participants in the Climate Strikes are the largest recorded in world history. Whether the reasons behind any current environmental crisis are political, economic, or just plain ethical, the growing awareness of the earth is gradually becoming a reason to unite under the same belief of taking care of our planet, and the union can begin right here at WCHS.

“I think people here in Churchill should care about the Amazon in the sense that people are being taken away from their homes,” VanTassel said. “I think in that sense, I do think students could do something! They could start an interest group that takes on some kind of charge and tries to form a group that focuses on raising awareness and informing the people on this environmental crisis.”