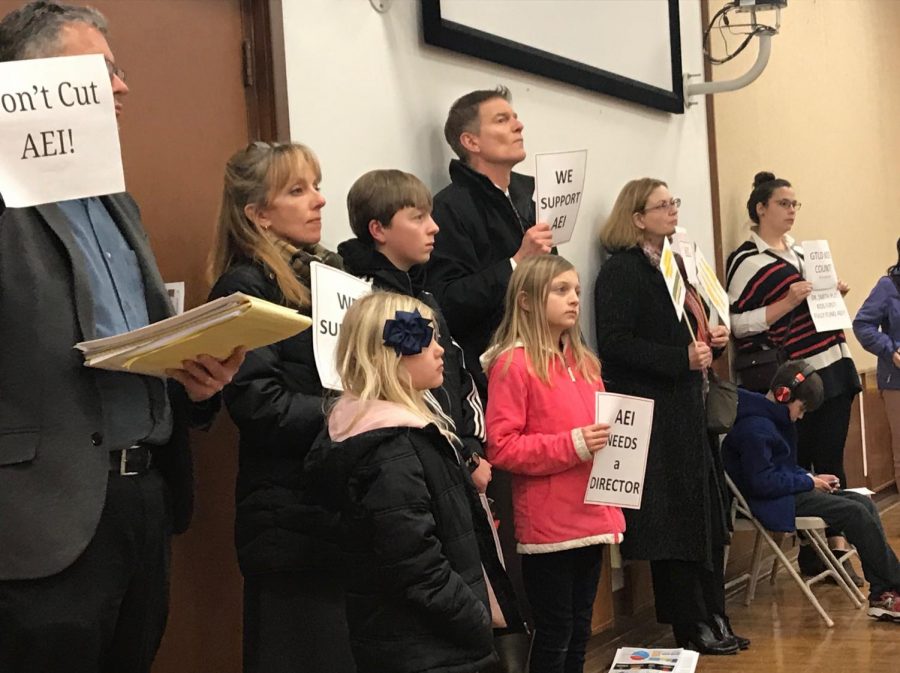 Montgomery County citizens show their concern for their schools and programs if key positions are cut.

This budget allocates funds towards hiring new staff and opening a new middle school in order to compensate for the increased enrollment for the upcoming school year. It also includes funds toward implementation of implicit bias and restorative justice training for teachers. Despite all this change, much of the MCPS community feels that this budget still has a long way to go before it truly satisfies the needs of the county.

“As a school system that spans dozens of languages and hundreds of cultures, it is our most important obligation to provide for the needs of all students,” said Nate Tinbite, who is a sophomore at John F. Kennedy High School and the Student Member of the Board (SMOB) candidate. “This budget is an opportunity to answer that moral call and support our most vulnerable peers.”

MCPS community members and student advocates attended a hearing Jan. 16 to address the 2018 fiscal budget. They expressed their concerns about vital programs that may experience a loss of funds, as well as issues that the budget fails to address all together. Among these programs and issues are Accelerated and Enriched Instruction (AEI), English for Speakers of Other Languages (ESOL) implementation and mental health reform.

One of the main sources of outrage among community members was the possibility that funds will be cut towards AEI. AEI provides students, both enrolled in magnet programs and enrolled in the regular public school program, with the opportunity to receive challenging instruction beyond what is provided in the classroom. The proposed budgets would cut AEI director and secretary positions.

According to a January 2018 Bethesda Magazine article, the elimination of these positions would save MCPS about $173,300.

“By cutting a position from this office and reorganizing it, there is a lot of fear in the MCPS community that many students will lose access to the challenging academic workload they need,” said Ananya Tadikonda, a junior at Richard Montgomery High School and also a SMOB candidate. “If we don’t have these offices, it will be more difficult to improve the engagement of underrepresented students in these programs.”

In addition to their fears over the removal of vital staff members in the AEI program, many members of the community expressed their concerns that another program imperative to ensuring the success of all students, ESOL, will experience cuts to central level staff under the proposed budget. ESOL is a program integrated into schools that allows non English-speaking students to learn at the same pace and level as other students. It also teaches them to speak English.

“Our ESOL population will grow by approximately 3000 students next year,” said Nate Tinbite in his budget hearing testimony. “Meeting the growing needs of these students is a dire necessity. Cutting central level ESOL staff can not be an option and would be morally unsound.”

Many also feel that issues critical to the state of MCPS, such as mental health reforms, were not discussed to the extent they can be.

According to the testimony of Walter Johnson High School junior and SMOB candidate Drew Skilton, MCPS is made up of 161,500 students, and the proposed fiscal year 2019 budget includes funding for 501 counselors. This would result in there being only one counselor per 229 MCPS middle and high school students, and one psychologist for every 722 secondary school students.

Due to this discrepancy between students and counselors, it is simply impossible for the resources students need will be available at any given time.

“Counselors and psychologist are critical,” Skilton said. “They are properly trained professionals who are able to provide the help these students are looking for. The number of these professionals in the MCPS system is not keeping up with student body growth.  As a community, we students need to work together to fight for the funding to have these counselors and psychologists readily available for us.”

Despite all the strides made to address widespread issues, many worry that the proposed budget still has a ways to go to increase diversity and provide services necessary for every student’s needs.

“While it may take more funding, the well-being of the students of MCPS is the top priority,” Skilton said. “The resources needed to reach this goal should not be denied because of the expense.”