Eager Nationals fans get to return to games 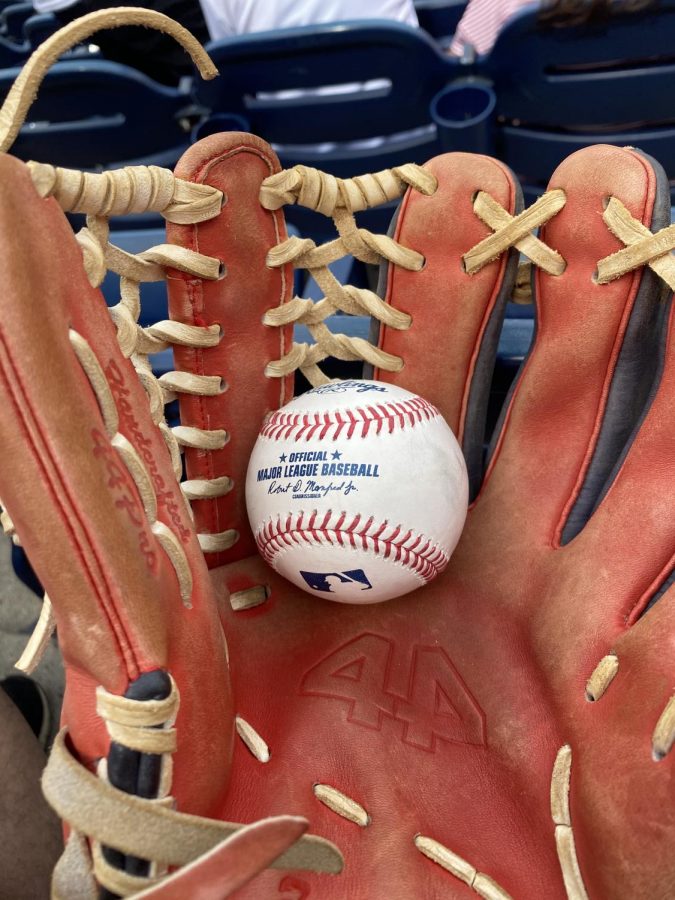 Although many staple ballpark traditions aren't taking place anymore due to COVID, fans can still get game balls from players. Here, Max Brodsky shows off one he recieved from the Nationals game on May 22nd.

Turnstiles unused, restaurants closed, 41,339 seats empty and little to no noise is the best way to describe Nationals Park last season. In fact, it was almost a perfect metaphor for the team’s 2020 season that saw them miss the playoffs and finish in last place in the NL East with a 26-34 record just one year after winning the World Series. Coming into the 2021 season, things still seemed grim in DC, as the dreaded World Series “hangover” was still in effect.

Luckily, things finally turned around on March 16, 2021 when current team principal owner Mark Lerner announced that the team had gotten permission from the city of DC to host 5,000 fans on Opening Day. Since then, the capacity has expanded to 15,000 fans and the team now has permission from DC mayor Muriel Bowser to return to full capacity starting June 10. This news has many fans excited to return, as it has been over a year and a half since most have been to the stadium.

“It is definitely a very cool experience. As a baseball player myself, going back to a baseball game was a really cool feeling,” sophomore and member of the WCHS JV baseball team Eric Chen said.

One thing that was certainly missing from stadiums in the 2020 season was the electricity within the stadium. Without 40,000-50,000 fans constantly cheering, the atmosphere was definitely not the same. Some students could still feel the energy of the crowd when attending games, although it isn’t the same due to COVID restrictions.

“The stadium atmosphere is not as electric because of the current capacity limits and socially distanced seating,” Chen said. “But, there is still a decent atmosphere at Nationals games that is undeniable.”

On the flip side, some students felt that the electricity from the fans within the stadium wasn’t at all different from a pre-pandemic game due to the constant upbeat energy of the fans that were allowed in. The excitement of finally being able to go to a game made many fans louder than ever.

“The atmosphere surprisingly didn’t feel much different than before the pandemic. Most of the fans were really into it and having a great time,” freshman and WCHS JV baseball team member Max Brodsky said. “It was a bit different because there weren’t as many people, but everyone was excited to be there.”

But, there are many things that one should know before buying tickets and going to a game. Whether it’s the team’s mask policies, the new process of ordering food from concession stands, or even the seating arrangement within the stands, there have been many large changes made to the viewer experience in order to follow the DC COVID guidelines.

“There are a few things a fan will need to know before going to their first game since the pandemic,” Chen said. “Don’t be surprised when people are sitting so far apart from each other. Also, all fans need to be wearing a mask at all times unless they’re eating, which is something that they are enforcing tightly.”

All in all, despite the current changes to the viewing experience, going back to Nationals Park has provided fans with a new excitement and a sense of normalcy that they haven’t felt since the pandemic began in March 2020; and with the team opening up to full capacity in June, the restrictions will only loosen as the energy within the stadium grows. In addition, with many WCHS students growing up going to Nationals games with their family and friends, it has also given them a sense of nostalgia.

“It felt nice being back at a place I went to all the time as a kid growing up,” Brodsky said. “I love going to Nationals Park and I hope that I have the chance to go back at least a couple more times this season.”