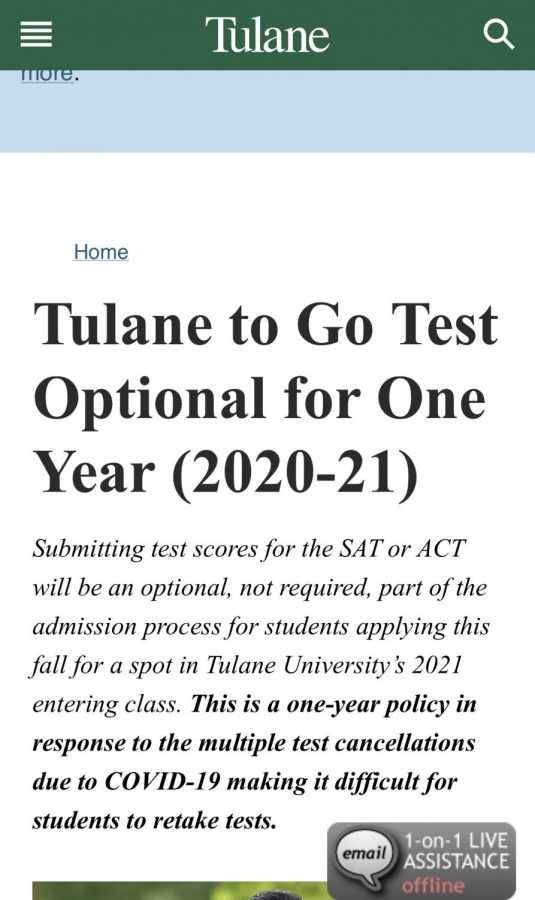 On April 10 2020, Tulane University in New Oreleans, Louisiana announced that they will officially be going test optional for the 2020-2021 admissions.

During this quarantine, students have had a lot of extra time on their hands. Most people are trying to continue with their normal routine as much as they can, while others are taking the time to catch up on missed sleep. This time would have been perfect for high school juniors to get in some much needed studying for their ACT’s and SAT’s, had they not been postponed due to the Coronavirus.

With social gatherings being limited to less than ten people, The College Board and ACT had to make the difficult decision of postponing their tests that are essential for students to take in order to apply to most colleges.

“I had been studying for a couple of months, and I was finally starting to feel prepared for the test when the announcement came out,” junior Catherine Gilligan said. “Now I am terrified that I will not be able to take the test prior to submitting applications, which will limit the amount of schools and which schools I am able to apply to.”

According to an April 13, 2020 Washington Post article, over one million juniors are missing out on the ACT’s and SAT’s. Because of this, many colleges and universities all across the nation have begun to have discussions regarding their testing requirements for the class of 2021.

An April 22, 2020 Miami Times article states that over 51 colleges and universities have completely scratched their testing requirements for the class of 2021, including Cornell, Tulane and all of the schools part of the University of California system.

“Hearing that so many schools have dropped the requirements has been such a relief,”  junior Jordyn Reicin said. “I just wish it could be a uniform statement across the nation as we should not be stressing out over whether or not we have to take these tests, but focusing on staying healthy and doing everything we can to stop the spread so we can get back to normal.”

On the other hand, there are students all over that are not happy about the non-required test scores. Most juniors start preparing for the exam early in the year in the hopes that they can get it over with. To those students, they feel that all of their time, effort and money put towards tutoring has been a complete waste.

“All of those months that I have been studying for the test for are just months that I could have spent doing something more productive if I didn’t know I was not going to take the test,” junior Claire Yinger said.

Another issue that the class of 2021 may face are the second semester grades. Standard grades may or may not be on their transcript, instead it would say “pass/fail.” Many students are not happy with the possibility of this being on their high school transcript due to the fact that they will be losing an entire semester that could have boosted their GPAs and given them good final grades for the admissions representatives to look at.

“Your second semester of junior year contains probably the most important grades,” junior Catherine Kutson said. “It shows your most recent grades which reflects the closest to how you would do in college. It is super stressful to not know whether or not my grades for the second semester will be shown.”