Shakespeare: to be or not to be taught in English classes 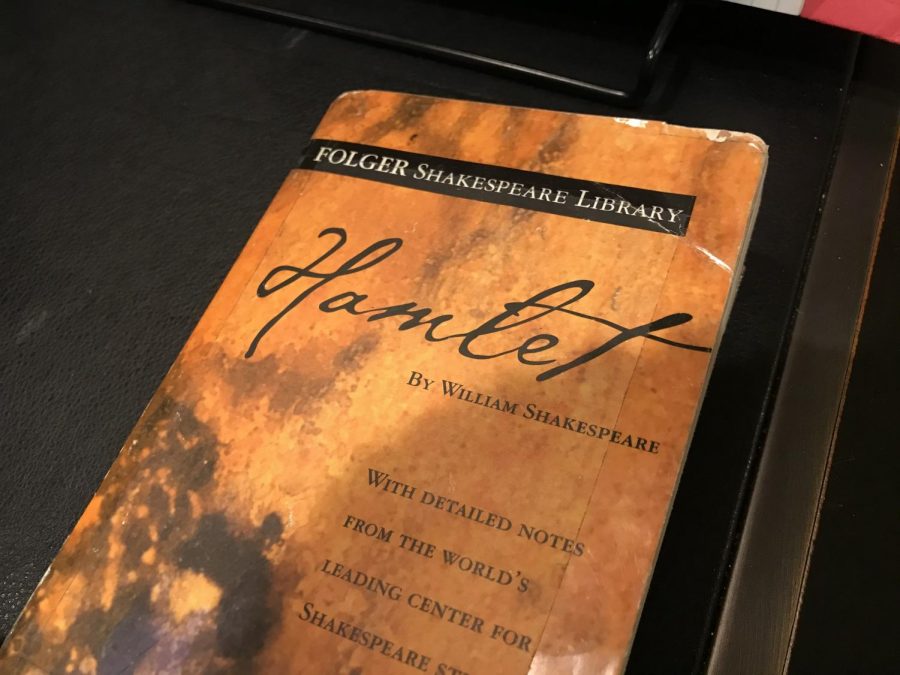 Books such as this copy of Hamlet are simply scripts of plays, which were meant to be watched live

“The dram of [evil] / Doth all the noble substance of a doubt / to his own scandal.”

This line from William Shakespeare’s famous play, Hamlet, is meaningful yet confusing. Undoubtedly, a great theme of the play hides behind the early modern English. Students worldwide have been asked to ‘translate’ Shakespearean English into modern ideas for as long as education has been standardized. The only problem? Nobody, not even the scholars, know what this quote means. The footnote in this version of the book reads “these difficult lines have never been satisfactorily repaired.” Many students have asked why Shakespeare is even necessary when so many other writings exist in plain, modern English.

Most students would agree that Shakespeare is difficult to understand. Between different word choice and grammatical structure, the text almost seems to be written in gibberish to untrained speakers of modern English.

“I find the stories presented in the plays pretty interesting,” WCHS senior Joseph Resta said. “But only after my teacher explains what’s happening to me. While I’m reading, it looks almost like nonsense to me.”

This can be a major problem in a system that desperately wants to make classes more engaging for their students. While discussions about the play’s central themes and ideas do take off in interesting directions, it may not be worth it if students cannot understand those ideas.

Another issue is that Shakespeare’s works weren’t written to be read; they were written to be watched. The first part of any Shakespeare lesson is inevitably a day defining iambic pentameter, the style Shakespeare wrote in, and how the lines would have been delivered on a stage.

“Reading the script for Star Wars wouldn’t be nearly as enjoyable as watching the movie,” Resta said. “I feel like these plays are experiencing this same problem.”

However,for every confused student demanding the end of Shakespeare being taught in schools, there is an equal number trying to secure the plays’ future.

Many English teachers acknowledge and try to cope with some of the problems of reading straight from a script. For example, many AP English Literature and Composition classes watch a film adaptation of Hamlet while they follow along in their books. This way, the content is presented in a way closer to what was intended by Shakespeare himself.

“It’s so much easier to understand the emotional weight when it’s shown in live action,” senior Ritik Chopra said. “I understand the play far better than I would have if I’d just read the book.”

The ideas and themes used by Shakespeare, some argue, are not captured as effectively in other works.

“My teacher talks a lot about ties to philosophical principle, like Hobbes,” senior Navid Misaghian said. “I just feel like modern works don’t have that connection. I find the discussions we have on it extremely interesting.”

Literature class discussions of Shakespearean works often brings up debates about philosophy, such as the meaning of life, how to be a better person, the cause of violence and our psychological needs, to name a few. Even though the language is hard to read, the metaphors are plain and simple, often much more so than with other authors. Many argue that the accessibility of such philosophical discussions is worth the extra time needed to ‘get’ the plot.

This debate has raged for decades and will likely not cease any time soon. For the foreseeable future, old William can rest easy knowing that his plays are still being learned from to this day. “To be or not to be,” may always be the question for these plays, but the teaching community will have to look a little longer for an answer.