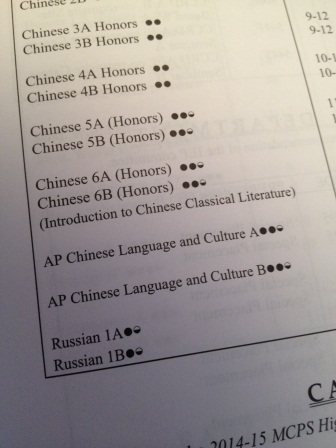 This week, counselors came to students’ classes to talk about registering for next year’s courses. When students opened the class description booklets, they discovered a big surprise.

CHS will be offering Russian 1 for the 2014-15 school year. The class will be open to students of all grade levels and will give them an opportunity to try something different.

”I think offering Russian next year is a great idea,” junior Lasya Komaragiri said. “For so many years the only choices we had were Spanish, French and Chinese. Russian stands out and sounds far more interesting.”

Not all students are as optimistic about the change. Some find that the three languages that CHS offers now—Spanish, French and Chinese—are languages that could come in handy in the ‘real world,’ and Russian is not.

“I think CHS should have improved current programs rather than trying to create a new one,” freshman Sheila Gaur said. “I am really questioning the number of kids who would be interested in taking Russian because of how hard and different it seems to be. The money would be better spent on classes that are relatively underfunded and have high participation rates. ”

CHS is not the first school to offer Russian. Other MCPS schools, such as Whitman, have been teaching it for years.

By offering Russian, CHS will be giving those students who have stopped taking a foreign language an opportunity to try something new.

“I wish they had offered it earlier because I stopped taking Spanish after freshman year and I was going to start a different language, but none of the other ones really interested me,” Komaragiri said. “If Russian was offered then, I definitely would have taken it.”