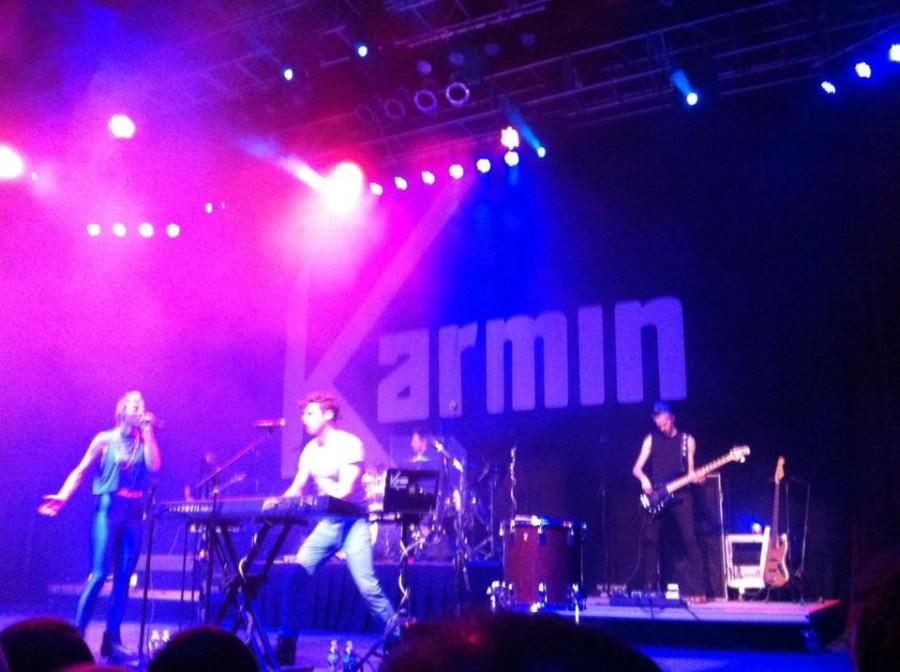 Though not yet a household name, the Boston-based pop-duo by the name of Karmin sure deserves it after their electrifying high-energy performance at the Fillmore Silver Spring Feb. 7.

The down-to-earth couple, now engaged, Amy Heidemann and Nick Noonan first gained popularity when they reached over one million views by covering hit songs on Youtube like Chris Brown’s “Look At Me Now.” Their original song, “Brokenhearted,” which tells the story of how Amy met Nick, became an inevitable hit soon after the release of their other song “Hello EP” in 2012.

Their official first full-length album, Pulses, although complete for over a year has experienced trouble on the road to release due to disagreements between Karmin and their record company. Despite the fact the album is not scheduled for release until March 25, Karmin hit the road for their first headlining tour and gave an impressive show at the Fillmore.

The Fillmore Silver Spring is an intimate and lively setting, offering first-class music, entertainment and community experience to a standing 2000-person concert hall in downtown Silver Spring.  The venue offers visitors chic decorations, like gleaming chandeliers and leading technology in audio, lighting and other special effects.

Early arrivers to the Karmin show were treated to the opening act, Bryce Vine, a talented new pop-rap artist. Although not the headliner, Vine had the whole crowd singing and dancing along to powerful rap ballads.

Karmin hit the stage next after a short, exhilarating waiting period. Amy was dressed in an eccentric two piece blue get-up while her partner wore a more conventional look of a grey shirt and jeans.  The band was backed up with a guitarist, bassist and drummer.

Karmin opened their show with their incredibly catchy new single, “I Want It All.”  Even if the crowd did not know all the lyrics, it was easy to sing along and jam out to.  There were 12 more songs on the set list, including many new songs to which Amy told the crowd to not tell the record company on them, generating a laugh from the audience.

“The 2 singers had lots of energy and I didn’t know any songs from them but I still had lots of fun,” freshman Libby Springs said.

The Fillmore crowd was very involved with the music, no matter the age group. From 30 year olds to 12 year olds, the concert had something for everyone.

Nick had a surprisingly large part in the concert.  Although fans rarely get to hear him sing in older songs, Nick got to show off his singing voice in the newer material. Besides singing, he played several instruments including a slide trombone to keyboards as well.

Karmin performed other new songs the audience could participate in such as “Neon Love,” the only ballad of the entire set list that Amy herself said would be sad. Though it was a rather gloomy tune, the duet impressed the crowd with their apparent romantic connection and wide range of singing abilities.  Karmin’s performance of their 2012 song “Too Many Fish” was mashed up with Macklemore’s “Thrift Shop,” to produce a head-banging fist-pumping experience.  The last song of the setlist was “Hate to Love You,” a love song that Amy dedicated to all her fans.

The concert was then over. Or so it was thought….

The crowd at Fillmore cheered and chanted Karmin’s name enough to bring on a call back. The band returned to sing “Look At Me Now.” However, Amy did not sing it by herself but instead asked the audience for help. Amy chose two girls in blue because she jokingly said she was looking for someone in such a color so they would match for a picture. The two teenage girls surprised everyone with their ability to rap near-perfectly to the lyrics to Chris Brown’s song. Even Amy was speechless.

The concluding song was Karmin’s most recognized song of all, “Brokenhearted.”  The incredibly catchy song – fuelled with energetic, bass line beats – had the entirety of Fillmore jumping, grooving and singing along loudly to every word.

In the middle of “Brokenhearted” every crowd member got a colorful piece of paper cut in the shape of a heart to hold up during the song as a surprise for Karmin, the Fillmore being the genius behind that idea.

Ultimately, the song was a perfect way to end the night on an amazingly high note. To wrap it all up, after the show there were Karmin-designed t-shirts and necklaces for purchase.

Want to know more about Karmin?