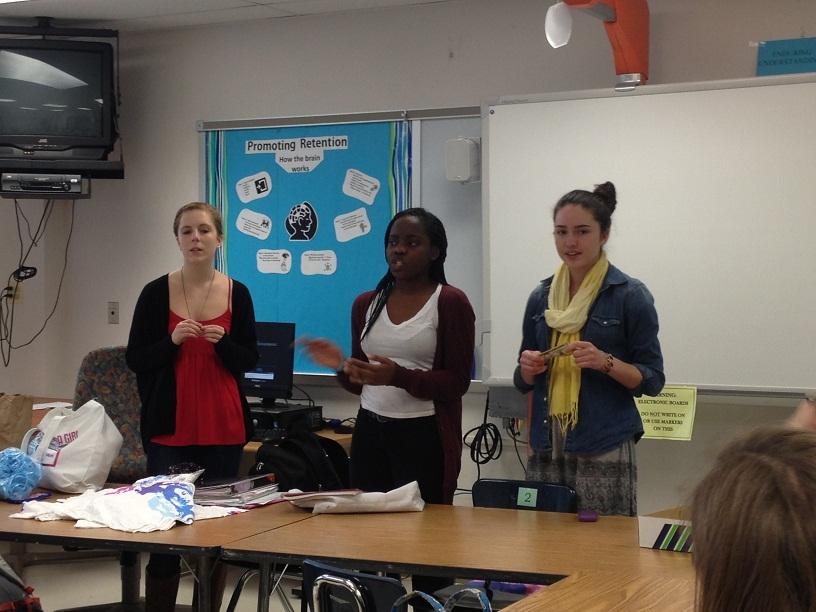 Despite the numerous achievements woman kind has made in society, they are still often thought of as second class citizens. However one CHS senior is leading the charge to change that.

Girl Up is a United Nations Foundation campaign created to make sure all girls have an opportunity to become educated, protected and healthy leaders, and senior Gloria Samen started CHS’s very own chapter this year to empower girls and allow them to “Girl Up”.

“I got involved with Girl Up through a former CHS student, Keirsten Lee,” Samen said. “She wanted my help starting a club after she had heard about it at a leadership conference, but we a lot of trouble finding a sponsor.”

After a year and a half of searching, Samen found one in assistant school administration Brandi Richardson.

Over the summer, Samen worked with an anti-trafficking agency in Washington, D.C. Her advisor nominated her for a position with Girl Up, and she was one of 20 girls selected from across the country.

“I want to spark an interest in new ideas and open discussion about the changes we want to see,” Samen said. “Then I want to see those discussions and interests develop into action because I think that there’s nothing more important than investing in others.”

In mid-October, Samen was selected to visit the UN with the other girls who were chosen to discuss important initiatives and campaigns.

“In the afternoon we went to the United Nations Economic and Social Council (ECOSOC) chamber of the UN for a Girls Speak Out event, where girls with different organizations all over the world spoke about the project they’d embarked on in their respective countries, and the lives they have influenced,” Samen said.

The CHS Girl Up chapter plans to hold a series of events to raise money, including a gift wrap at Barnes and Noble for the holiday season, an ice skating benefit at Rio Washington Center, and a mother-daughter yoga class.

“The club is going to raise tons of money for Girl Up so that it can continue doing its work to benefit girls,” junior secretary Katie Kidney said.

The efforts by Samen and the United Nations are all in hopes that women’s rights and conditions all around the world improve.

“I really want to make a difference to help girls around the world so they can live healthy lives and have the same opportunities as girls in the US do,” Kidney said. “While the US isn’t perfect, we have fantastic opportunities that everyone deserves.”

While Samen is particularly passionate about women’s rights, her overwhelming goal is to just empower people in general.

“I don’t expect everyone to become a feminist over night or immediate interested in the plight of girls and women around the world, but I want everyone to find a cause or issue that they are passionate about and that they want to work towards solving,” Samen said. “Some people think that they don’t have enough power or influence to make a difference, and I want to reject that apathy. I want our generation and community to move to a place where we feel confident enough to do all the good that we can, wherever we can, for as many people as we can.”