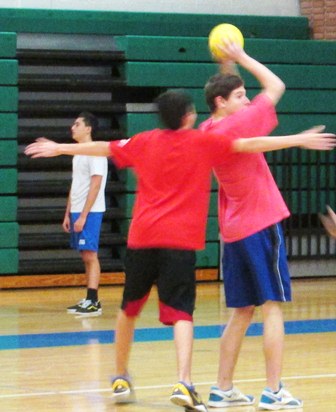 The CHS handball team’s season concluded against Northwood Oct. 15, with a 22-14 victory. The team finished with a record of 5 wins and 1 loss.

“The season went great,” junior captain John Sahin said. “We only lost one game and in my opinion were really good as a team together.”

According to Sahin, because handball was new to CHS the team really did not know what to expect coming into the season, and “just went with it as games progressed.”

The Bulldogs suffered their only loss to Blair High School Oct. 4 in a close 23-19 game.

The Bulldogs placed second in the southern division and have high expectations for next year.

According to junior captain Max Alpert, the team needs to improve their defense for next year, which at times would be disorganized and allow opposing teams to score with ease.

According to junior Garret Fish, the team has very high expectations for next year, because the team will have had more time to gel together and fix their mistakes.

The team only graduated one player, Alex Barmen, this year and will look to the current juniors to rise to the occasion and fill the void.

“For next season we want to keep our winning record and stay together as a team” Sahin said.