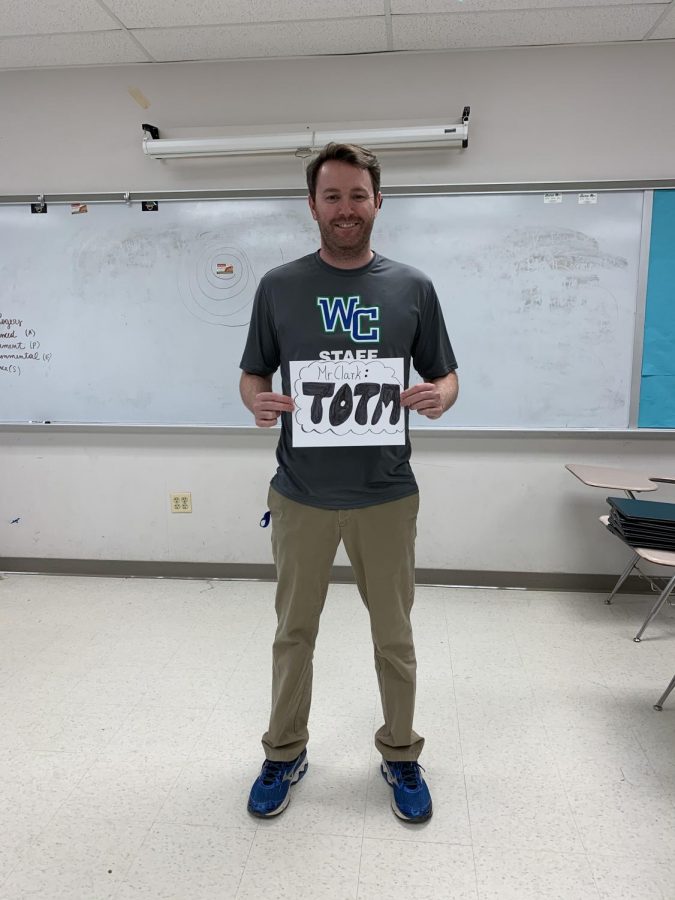 Mr. Clark poses for a photo with his award. The government teacher graduated from the University of Maryland with a double degree.

Social studies classes are some of the most engaging and interesting courses to take at WCHS, especially because of the passionate teachers in the department. AP Comparative Government and AP NSL teacher Bryan Clark is no exception, as students know him for being chill, funny and knowledgeable.

After attending Florida State University in his freshman year, Clark graduated from the University of Maryland with a double degree in secondary education and history. WCHS is the third high school he has taught at, but he finds students here to have been the most respectful.

Clark is well versed in current events as well as political and social climates of various countries in the world. He is motivated to teach by various factors in his early life, such as the teachers he used to have that helped him greatly as well as his mother, a teacher herself.

“I wanted to teach because I had some difficulties learning in elementary school. I had great teachers that helped me overcome these obstacles,” Clark said. “ My mother was also a 5th-grade teacher for 42 years. I also have a lot of patience which is a characteristic teachers need.”

Clark’s classes usually consist of note taking with explanations in further detail given verbally, as well as watching relevant videos and discussing them with students. Since his courses deal with current events, students often have a lot to debate. He is always supportive of student curiosity and if he cannot answer a question without certainty, he always gets back to the student once he has found an answer.

“I love teaching government because you can talk about current events and incorporate them into lessons,” Clark said. “I care that my students become informed citizens and keep up with what’s going on in our country and the world.”

He is also popular among his social studies department colleagues, who work closely with him in planning curriculums and grading assignments. Mr. Rivinius and Clark are the only two teachers who teach AP Comparative Government.

“Mr. Clark is very calm and patient with both staff and students,” Rivinius said. “He is easy to work with and also has a very funny sense of humor.”

After the 2019-2020 school year is over, he plans on moving to Mexico in order to teach comparative government at a prestigious school. Although WCHS is sad to see Clark leave, students and teachers alike are excited for the career and successes that await him.

“I’m very excited for Mr. Clark to be going to teach in Mexico. It’s an awesome opportunity for him and he will be working at a very interesting school,” Rivinius said. “Perhaps we can have him Skype in if an interesting story develops in Mexico. He can be our Mexico correspondent.”