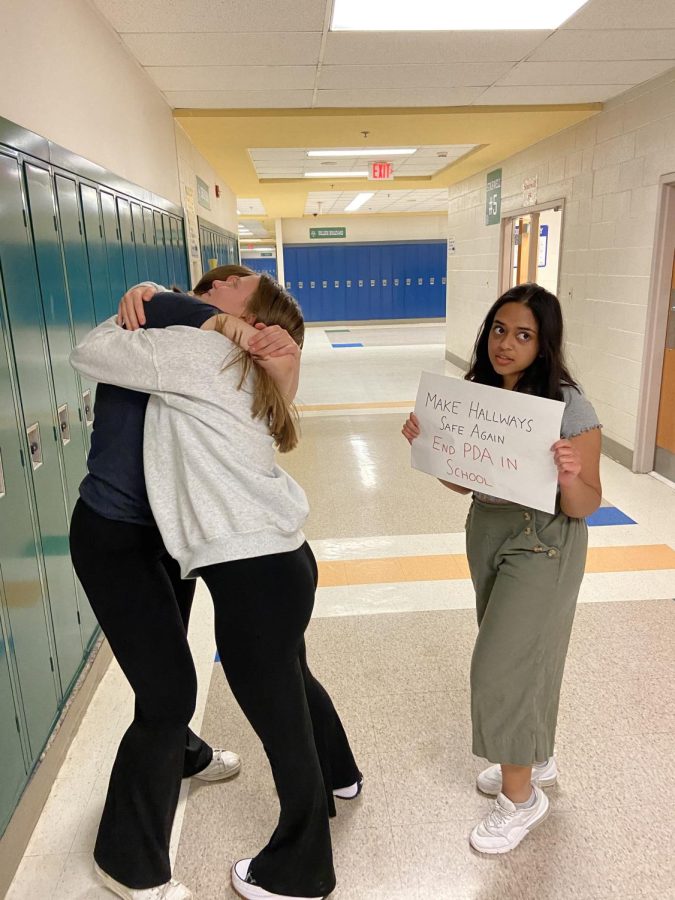 A concerned student protests a couple's display of affection in the hallway.

During Bulldog Pride, WCHS has covered issues from procrastination to bullying. Now due to rising student protests, WCHS tackles a new issue emerging in the county – public displays of affection.

Imagine this – a weary student walks down the halls with a sense of hopefulness that accompanies the end of a school day. These warm feelings are immediately dashed when they chance upon a terrifying sight – a couple disobeying social distance guidelines to the horror of everyone around them.

“I just don’t feel like Churchill is a safe space anymore,” WCHS sophomore Nadia Amore said. “It’s especially bad before school starts or during lunch, but I feel like everywhere I turn I see an obnoxious couple.”

Luckily for Amore she is no longer alone in her struggles. Recently, a coalition of students calling themselves the Students Opposing Love Openness (SOLO) formed to implement three of their goals in the WCHS community. The first is to raise awareness of how Students in Relationships (SIR) are negatively impacting those around them. The second is to have school sponsored community building activities centered around the topic such as Pride so students can brainstorm solutions to this issue. Third, and arguably the most important goal, to completely ban PDA from the halls of WCHS.

“SOLO helped me imagine a world where I could walk through the school in peace,” Amore said. “I immediately joined their campaign so I could make this dream a reality.”

In a recent survey, 99% of couples claim that the students leading this campaign are “bitter” and “not giving off good vibes.” To these naysayers, lead organizer and WCHS junior Amelia Konrad repeats the movement’s slogan: “PDA now means Put Down Arousal.”

“I started this campaign with some of my fellow students that are fed up of being forced to witness the actions of our peers in relationships,” Konrad said. “The breaking point for me was when I had to get to class early to ask my teacher a question before the test, and I was stuck behind a couple that refused to let go of each other’s hands and let other people in the hallway pass by. Needless to say that the D I received on that test motivated me to finally take a stand against this pervasive issue.”

Recently, Konrad held a walkout to show WCHS administration the extent of student interest around this topic and why a Pride advisory was necessary. On Feb. 26, a large group of students gathered in the bus loop to share their grievances and recount their harrowing experiences of witnessing PDA at WCHS.

“The walkout was extremely successful, and really forced the administration to finally listen to us,” Konrad said. “Before this day I never knew how many students were feeling the same frustration that I was, and I felt a real sense of community.”

Due to the demonstrated student interest, WCHS administration is organizing a lesson plan that will be carried out during April. In it they plan to hold community circles to allow students to share their feelings, as well as guided questions to give a deeper analysis of the issue.

“I felt like Pride was the best way to reach the broader student body because of the amazing participation and attention that is always given to all of the lessons. Sure a Choice day may be more fun, but the sooner we address this issue the quicker it is going to end,” Konrad said. “I will continue to fight for the end of PDA until I graduate, because I want to leave the school community better than when I found it.”