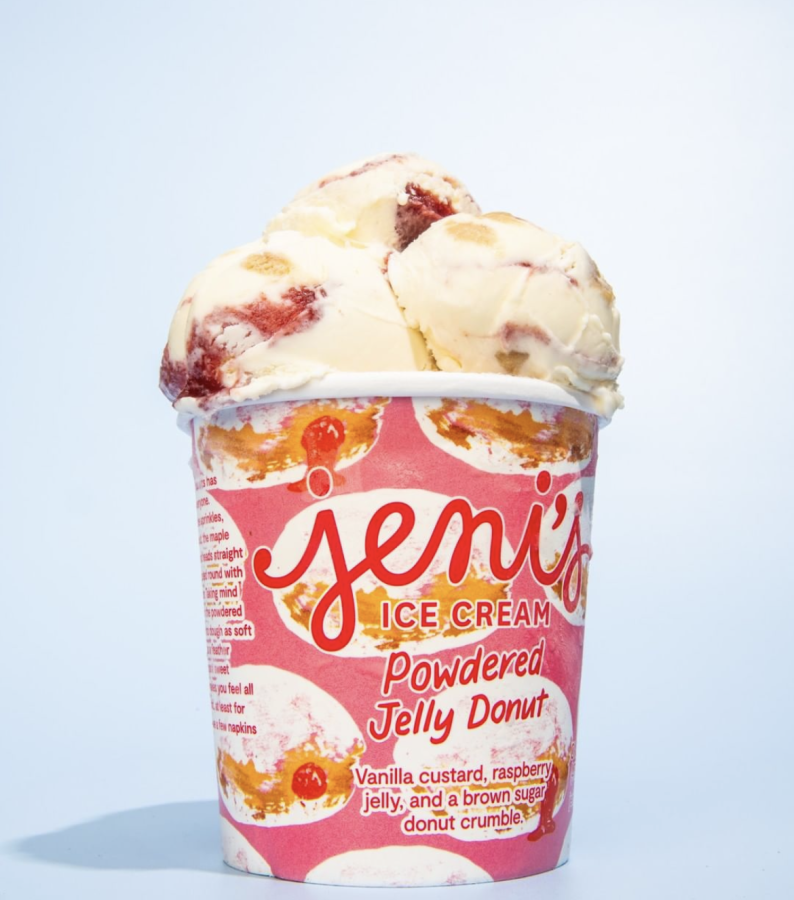 Jeni's consistently comes out with new and unique flavors such as the above pictured "Powdered Jelly Donut", which was released on April 14.

Filling the place of Baskin Robbins will be Jeni’s, a smaller ice cream chain that has 47 different stores across 18 metro areas. Jeni’s was founded in 2002 by Jeni Britton Bauer in Columbus, Ohio. Since then, the store has been dedicated to creating interesting yet delicious flavors, such as “Sweet Cream Biscuits & Peach Jam” and “Cream Puff” for their customers both at the counter and at homes around the country, due to their nationwide shipping.

The chain already has six locations in the DMV area, with the closest to WCHS being their store at Bethesda Row in downtown Bethesda. However, opening in Cabin John will make the store much more convenient for the WCHS community. Additionally, Cabin John is often frequented by WCHS students and families both during lunch and after school, so it is likely that Jeni’s will become a massive success in the area.

While some of their flavors admittedly sound odd such as “Wildberry Lavender” and the limited edition flavor “Everything Bagel,” they have plenty of great hits to complement the warm waffle cones they make in the back. Some of the highlights include unique flavors like “Skillet Cinnamon Roll” and “Brandied Banana Brulee” as well as classics like “Salted Caramel” and “Cookies & Cream.”

If eating in the store is not for you, then ordering a pint either in store or online is easy. Online shoppers must purchase at least four pints. But, when the ice cream is as good as Jeni’s, it will be finished in mere hours.

Unfortunately, Jeni’s is quite an expensive affair at $12 a pint. This has been a thorn in the company’s side for a while, and it even halted their growth when trying to expand into the supermarket product business.

“We faced countless frozen buyers who would say no one is going to buy $10 ice cream,” John Lowe, the brand’s CEO since 2009, said in an interview with Columbus Business First’s Dan Eaton in 2019.

Yet, since then, Jeni’s has luckily moved past this obstacle and are now in most major grocery retailers across the country, despite still having higher prices than other chain brands like Baskin Robbins, Friendly’s or Haagen-Dazs. In the end, it came down to figuring out how to produce a high quality product, like their ice cream, without selling it at too high of a price. Their success comes from the store’s ability to maintain high quality products without too high of a price.

“[There are] companies in it purely for profit and others that truly appreciate and understand the craft,” Lowe said later with Columbus Business First’s Dan Eaton in 2019. “But as long as we are focusing on the quality of the ice cream and the experience people have as they come into our shops, there’s plenty of room for us to continue to do what we’re doing.”

In short, Jeni’s looks to be a great family-friendly option, replacing the long-standing Baskin Robbins. There are unique & delicious flavors, fresh & crisp waffle cones, and a colorful & warm atmosphere inside each location. What’s not to like?