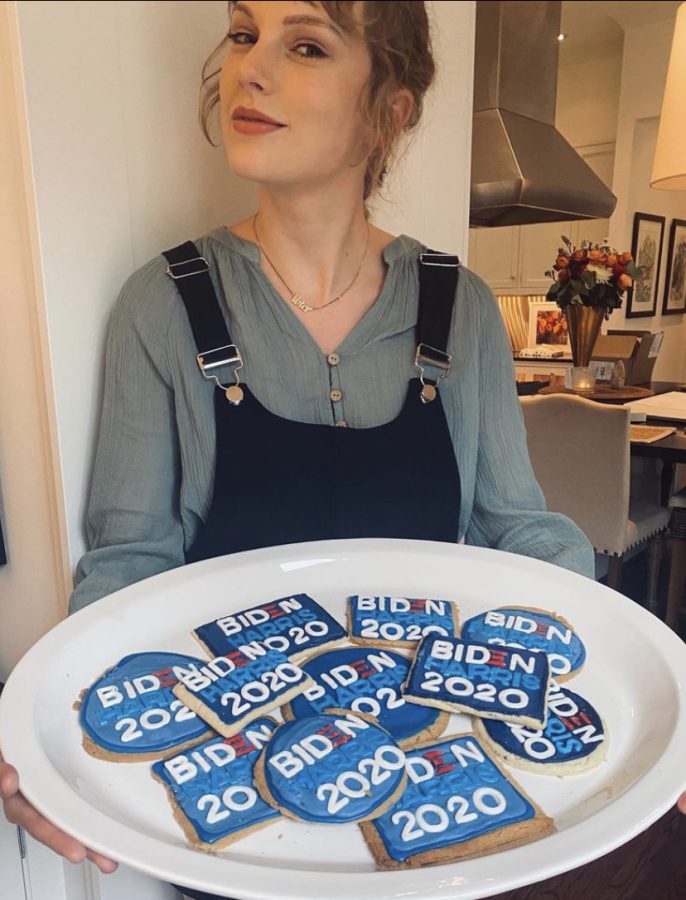 An Instagram post from artist Taylor Swift features her holding a plate of cookies decorated with the now president's name. This is an example of celebrities using social media to influence their fans.

The age-old icebreaker question of “would you rather be rich or famous?” entails more than the name suggests. Celebrities have always had an influence on the younger generation, but now more than ever, celebrities’ presence is evident. Whether or not these imitated behaviors and mannerisms are welcome, is the real issue.

Celebrities have a direct effect on their younger followers and some use this change in a positive way. Keanu Reeves, the famed actor in “John Wick”, has been known to donate large portions of his salary to a cure for Leukemia and humane societies. To go along with his impressionable movie character, Reeves has built himself the classic “nice guy” reputation.

“I think celebrities influence the younger generations positively by spreading activism,” WCHS junior Lily Kreindler said. “When they do good things, they are seen as a role model to teenagers and young adults.”

Taylor Swift is revered as one of the most popular artists for her constant support of LQBTQ+ rights. The WCHS community is very passionate about Swift as they even have a club dedicated to her music and personal life.

“I look up to Taylor Swift, especially because her writing style and music differentiates herself from other artists. Not only has she produced pop music, but she has sung and produced rap, folk, country, and indie,” Kreindler said. “Also she is not scared to speak her opinion like she did about LGBTQ+ rights during the 2020 election.”

On the other hand, some celebrities may publicly express themselves in ways that could be harmful when done by their younger audience. Rap has become a wildly popular genre among teens, however the vulgar language used in the songs has made its way into many teenagers’ vocabularies, which can lead to social issues.

“Celebrities can have a negative impact by spreading things that may seem inappropriate,” WCHS junior Josh Heimlich said. “They blindly influence the younger generation when they put things out to the public that are not sensitive to the age of their audience.”

There are a lot of internal and external motivators for celebrities to act a certain way. Most of them make a lot of money from public content such as music, speeches, TV appearances, etc, so their main goal is to cater to these audiences.

“I think the public pressures and influences celebrities to support different things and act a certain way,” Kreindler said. “However,  I also think that most of the time they are speaking about what they truly believe.”

“I see celebrities posting all the time and I always repost their things,” Heimlich said. “I like what they have to say and most of the time, I agree with it.”

Like the Taylor Swift Club, there is an enormous reflection of celebrities at WCHS. These past couple of years, the social media app TikTok took WCHS by storm. Popular dancers and celebrities created dances that students would be seen doing all around the school. In fact, it actually became an issue where students would be caught making TikToks in the hallway during class.

“I see people at Churchill imitating celebrities by using their slogans, dances, and wearing their clothes,” Heimlich said.

Whether the influence is good or bad, it is understood how much power and control celebrities have over people. In the end, famous people are human too and they have to be accountable for their words and actions.

“I would tell them to just be cautious before they put something out into the public,” Kreindler said. “Also I would say to think before you post on social media because you never know who is going to copy your next move.”