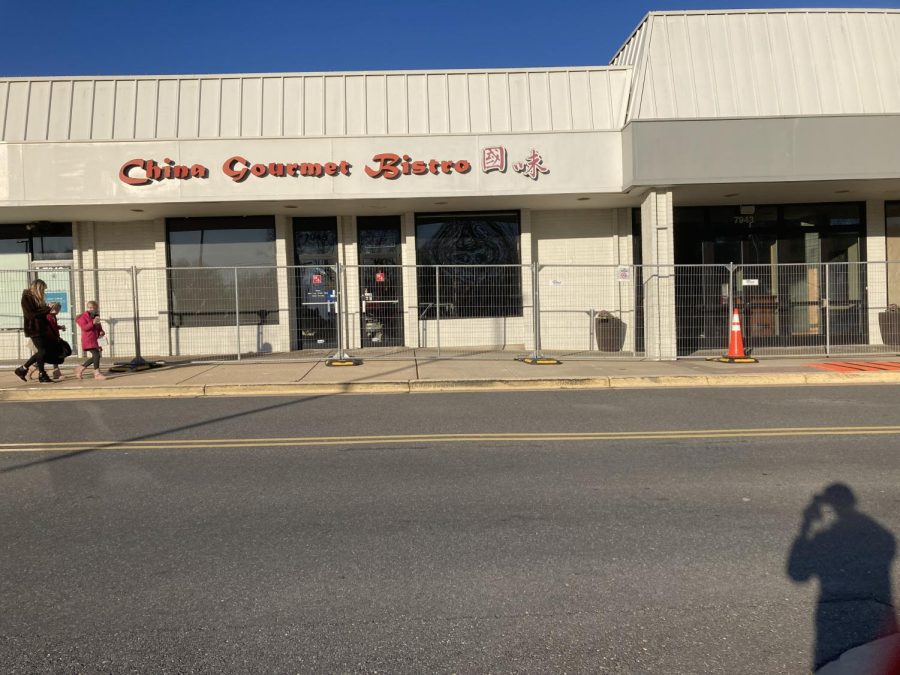 Metal grating separates the sidewalk and pedestrians from closed establishments between CVS and Giant -- including China Gourmet Bistro, Breadsmith, Capital One Bank and the Grilled Oyster Company -- that will eventually be cleared to make way for a road separating the convenience and grocery stores.

For 27 years, Broadway Pizza stood as a staple of the shopping center at the corner of Tuckerman and Seven Locks. Known for its pizzas, pastas and friendly neighborhood atmosphere, the restaurant was a key part of the Cabin John Shopping Center. It was the kind of place where families came on a Sunday night or after a long sporting season to celebrate, all because it was so welcoming.

At the end of 2016, Cabin John Shopping Center was sold by the Carl M. Freeman Cos., which has owned it for nearly five decades, to the real estate developer EDENS, which quickly ushered in a new era. The site was renamed Cabin John Village, new construction began and a wave of changes came to the establishments that called the area home.

“Broadway Pizza was a family, not only staff but our customers,” Dan Dubie, a co-owner and general manager of the restaurant, said. “The husband and wife who came every day to try our soup of the day. The party of 25 who came on Black Friday for lunch for over 20 years. The several soccer parties held every Saturday at the end of the season. The many families who came time after time and I watched their kids grow up and go to college, the several kids whose first job was Broadway that our now parents themselves.”

Dubie, co-owner Robert Phillips and another partner started Broadway 27 years ago. Phillips ran the business side, while Dubie headed up the restaurant side. When the shopping center was owned by Freeman Cos., the relationship between Broadway and management was “great.”  Dubie said EDENS was more interested in changing things up and Broadway was not what they desired.

“We kind of saw the writing on the wall at our very first meeting with the EDENS corporation,” Dubie said. “They felt we needed to rebrand ourselves and change our footprint to stay but without a lease we were not willing to take on such an expensive project. It was clear that EDENS planned to revive the center and Broadway as it stood was not part of that revival wanting instead to add trendy establishments.”

EDENS has been redoing the center since its purchase. Four restaurants and a central patio area opened in one corner. A new set of buildings were added facing the indoor mall, including a Capital One Bank. Townhomes are being built in the back. The roofs were touched up with a fresh coat of paint. Plans are being made to tear down the establishments between CVS and Giant to make way for a road. And many local businesses, particularly restaurants, did not have their leases renewed and left or plan to do so soon, as EDENS plans for the freshen-up. EDENS and the Cabin John Village did not respond to The Churchill Observer’s request for comment.

“I knew we would need to do a remodel and I guess with that some menu updates and social media presence. The mom and pop atmosphere was nice but I understood the center’s concerns,” Dubie said. “That being said I harbor no hard feelings but am saddened by the overall trend of chain and trendy restaurants versus local community businesses.”

According to Store Reporter, Broadway wanted to stay longer and Phillips told the publication that they expected to leave as soon as EDENS signed a new tenant. However, Phillips said that EDENS was not pushy throughout the process.

“EDENS never said or would have said you need to be out at the end of the month.  They would have given us plenty of notice if they wanted our space back,” Phillips said. “The problem was it is hard to operate a restaurant without a long term lease.  We decided to close because we needed to invest some money in making necessary improvements to the restaurant and without a long term lease, those expenditures did not make sense.”

As 2021 was coming to a close, so was Broadway. Dubie sent out a letter to customers saying they were permanently closing in December, thanking customers for their “loyalty and patronage.”

“I had many mixed emotions about closing Broadway Pizza. The pandemic and uncertainty of working without a lease for the past year made sustaining Broadway difficult,” Dubie said. “Leaving my Broadway family, both employees and customers, was heartbreaking.”

Phillips said the closing was difficult for him too, on both a personal and professional level. He emphasized Dubie’s role in the restaurant, in his final reflection.

“From a personal perspective, my kids (both Churchill grads) grew up with Broadway.  We created a lot of family memories at the restaurant,” Phillips said. “Some will miss our pizza, some will miss their favorite delivery driver, and I think all will miss Dan. Dan has been a constant since we opened. I have always been amazed at the connections he had with the customers. It was remarkable how many customers he greeted by name and he always remembered their usual orders.”

Both Dubie and Phillips said there are no plans to open in another location at this time, as some former Cabin John tenants — like the Grilled Oyster Company and Baskin-Robbins — did. Gone are the days of fundraiser nights for local schools or group dinners for sports teams or religious organizations. The lettering above the store is gone, with just a faint outline remaining, but the memories are still there.

“We were a cornerstone in the shopping center and the community,” Dubie said. “Feeling a part of a great community is what I will miss most.”