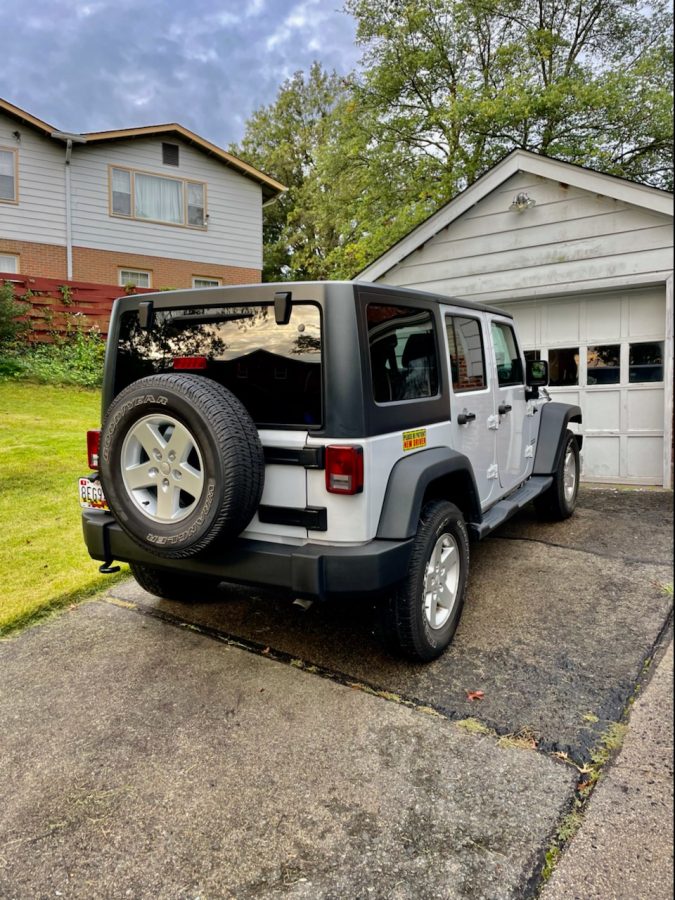 WCHS junior Nishu Shah's car sits in her parking spot. She parks in a driveway which she had to pay for, for the 2021-22 school year.

For juniors with licenses, parking in the student lot and on the street is not an option. Residents close to WCHS have offered up their driveways for juniors to park in exchange for a fee, some costing almost one thousand dollars for the school year.

“First, I made flyers that had information about myself and then I went around the perimeter of school with my friends and dropped off these flyers,” WCHS junior Nishu Shah said. “Surprisingly, I only heard back from two houses even though I handed out around 100 flyers.”

Shah ended up getting a callback from a woman who offered her a spot but wanted to meet Shah first. They met up to discuss logistics, and Shah left her house with a parking spot for the year.

These out-of-school spots come at a cost however. A survey that anonymously polled WCHS students found that prices for parking around the school ranged from $40 for the entire year to over $100 a month.

“I would say the price of the spot is definitely worth it because it’s saving me time and effort to get to school every single day,” Shah said. “It is a little bit unreasonable simply in the name of the neighboring people taking advantage of students to make some extra cash.”

Luckily for WCHS seniors, they were able to apply for a parking spot in the student lot last school year. The spot is convenient and rids them of the worry of having to buy a place in someone’s driveway.

“Applying for the spot was easy,” WCHS senior Andy Sarrat said. “All I had to do was use the link on the Churchill website which brought me to a Google form, and then I filled in some information and that was it.”

Sarrat, whose spot is located in the lot in between the tennis courts and the field hockey field, is one of 240 WCHS students who enjoys the convenience of having their vehicles parked at school.

“It’s convenient to park in the Churchill lot for the main reason that you can drive yourself to school and not have to worry about either the bus or that there won’t be space on the street,” Sarrat said. “Even if you park on the street, you still avoid having to take the bus.”

However, not all seniors who applied for a spot in the student lot got one due to high demand. They have other options such as taking the bus, driving with friends or parking on the street, which they need a permit from WCHS to do.

“The backup plan was to ride with a friend,” Sarrat said. “But if I didn’t get a spot in the lot, I would assume I would have at least gotten a spot on the street.”

Juniors like Shah feel taken advantage of by the owners of the homes who charge them to park their cars in their driveways. The WCHS administration or county has expressed no specific regulations regarding the issue of paying for spots; however, it is an issue that is growing ever so much.

“It doesn’t seem fair for [the homeowners] to charge us to park,” Shah said. “We’re just trying to get to school. Why should we have to pay for a basic necessity like parking?”

Shah is willing to pay and understands that the homeowner is in fact the owner of the property. Despite some saying that the operation is taking advantage of students, the homeowners have a right to their property and knowingly bought the house with the benefit of being so close to school.

“In a way, it does seem fair because it is their house and they own the property,” Shah said. “If students are willing to pay, they should have the ability to accept it.”

For future upperclassmen who plan on driving to school in their own car, getting started early is the best way to find an ideal spot.

“For next year’s juniors, I would just say be proactive and start looking for spots earlier than I did because once you start a bit later than others, then spots will be taken up,” Shah said. ”So be proactive, get out there, and hand out as many flyers as possible.”