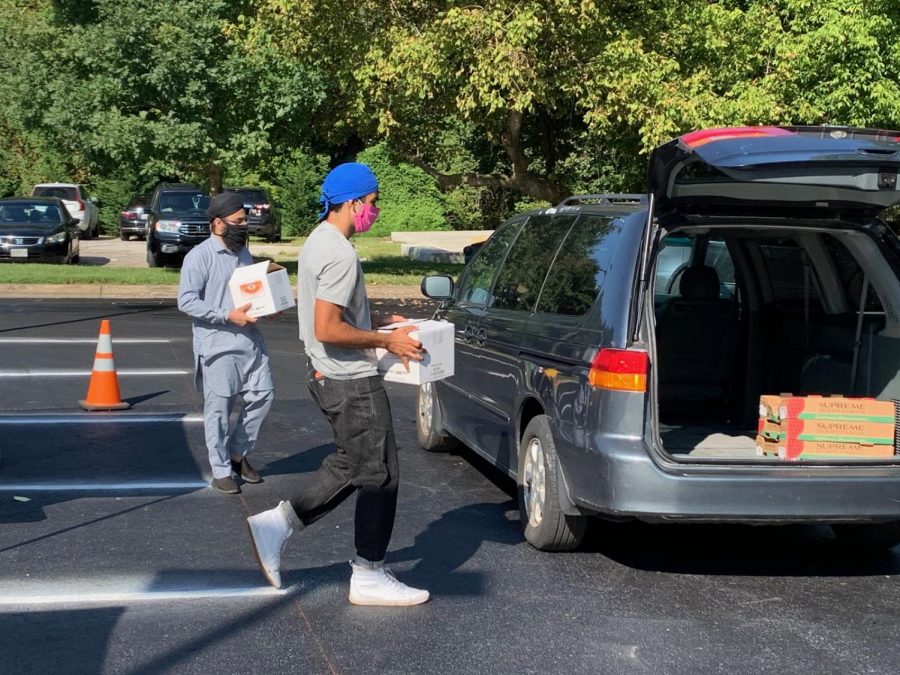 WCHS SGA president Jay Wood (front) and another GGSF volunteer help load cars with fresh produce, hot meals, and other food supplies for those dealing with food insecurity and other food needs.

Outside of a Sikh temple located on Travilah Road in northern Potomac, the Guru Gobind Singh Foundation (or GGSF) has distributed thousands of pounds of food and meals to those in need. Montgomery County, like many places, has been economically rocked by the Covid-19 pandemic, and one of the largest problems resulting from the hard times is increased levels of food insecurity. To combat this problem’s escalation, Montgomery County has found a major ally and partner in GGSF’s service devoted community.

“In the Sikh community there is Sewa. An idea of service that is constant. They’re always doing some kind of service. It seems to be an integral part of their spiritual community,” a WCHS math teacher Curt Hart-Southworth said.

The basic food distribution at GGSF is split into two main parts. The first is a direct partnership with Montgomery County in which GGSF helps transport, process and distribute food supplied through county sources and grants. This partnership also includes a specific program for senior citizens.

“This particular program was started after the pandemic, and is a partnership between GGSF’s community and the county,” Hart-Southworth said. “GGSF helps to break down food like rice and beans during the week, and then on the weekends distribute it at and from their temple along with fresh produce, hot meals, and sometimes dairy.”

The program’s second part is the temple’s own meal and food distribution program that takes place on Sundays. The program is run directly from the temple’s private facilities, kitchen and goodwill.

“Anybody can drive up to the temple on Sunday and pick up food. There’s no testing of need. No questions asked. Anyone can come and pick up a bundle for their family,” Hart-Southworth said.

According to the foundation, so far GGSF has distributed over 60,000 fresh Indian style meals; a program reliant on donations from mainly the Sikh community. Additionally, GGSF has broken down an astonishing 200,000 pounds plus of rice and beans into family size packs to be given out.

To truly appreciate this staggering amount of work and its immeasurable impact, the fact that much of GGSF is privately funded and volunteer run must be highlighted. Although much of GGSF is a county partnership, most of it stems purely from the temple and Sikh community.

“I should make the point that the fresh produce, milk, rice, and beans come from a county grant, but the 1000-1500 hot meals a week they deliver are prepared directly by the congregation. So that’s out their own pocket, time and resources” Hart-Southworth said. “All the man power, no matter what, comes 99% from the Sikh community.”

Having such a meaningful organization in local proximity has quietly involved many members of the WCHS community. One community member important to both WCHS and GGSF is Aman Shergill, who leads WCHS’s Education Foundation as well as GGSF’s food programs.

“I first heard about GGSF from Aman Shergill. She invited me to come help out with the food delivery back in August,” Hart-Southworth said. “We would take big bags of rice and break them down into family sizes. On Sundays she asked me to drive, so we make deliveries of fresh produce, sometimes dairy, and hot meals to seniors and other people in need in the county.”

Although Hart-Southworth has lost free time with the advent of the school year, he has continued  working with GGSF helping them fulfill the great needs they meet.

“With school I’m very busy, but I’m still driving on Sunday mornings. Today I delivered to eight families and drove about 80 miles. In the past I’ve done deliveries to Damascus, Clarksburg, and Gaithersburg. All over the county.” Hart-Southworth said.

Students from WCHS have also been among those volunteering at GGSF. One such helper being WCHS senior and SGA president Jay Wood. Although recently starting to help out, Wood has already felt the magnitude of GGSF’s cause.

“I basically help load cars with prepared meals and produce,” Wood said. “As someone who has been handing out the food, I’ve seen how many of these people have been struggling due to the pandemic, and how thankful they are for what GSSF does. Seeing the long lines of people waiting has shown me how many people are struggling with food insecurity in our own community.”

GGSF’s fight against food insecurity is critical. The problem, which has been only exacerbated by the pandemic, was already pervasive in communities of all levels of varying affluence. It is not new to the Montgomery County community, but GGSF and its volunteers have attempted to step up to the plate with an astounding amount of compassion.

“What I’ve seen personally is just incredible. I see a lot of gratitude in people’s eyes and they’re very thankful for the food that I deliver,” said Hart-Southworth. “While I’m making deliveries people will tell me they know someone else who is in need and so GGSF will graciously add them to their list. In fact one day, I came back and told them about someone and they immediately sent someone off with a box of food for a disabled person who needed help.”

The external compassion and generosity that GGSF has given to Montgomery County also presents itself in and around the Sikh community defining GGSF.

“I’m not Sikh, but every time I’ve been, they have welcomed me with open arms and I haven’t met one unfriendly person,” Wood said. “The Sikh community has really come together to help the greater Montgomery County community which is so cool to see.”

With the foundations of GGSF being a volunteering spirit channeled through Sikh and other local communities members, there are always ways to help out. GGSF routinely takes on new volunteers willing to contribute to its mission.

“The way to get involved I think is to contact Aman Shergill, and there’s also a Facebook page that has information,” Hart-Southworth said. “They have a sign up genius with many slots each day which I use. I’ve even brought my kids and seen other WCHS kids there.”

Donating food to food banks and looking out for neighbors with a humanitarian spirit is also important. GGSF and its majority Sikh community have been a bright spot in our community’s darkest hours, and can serve to inspire all of the WCHS community for good.

“The people at GGSF are very welcoming and I just feel really lucky because I feel it’s an opportunity for me to give back to the Montgomery County community,” said Hart-Southworth. “It’s a really beautiful thing I enjoy being a part of.”