The end of Fortnite, another marketing game 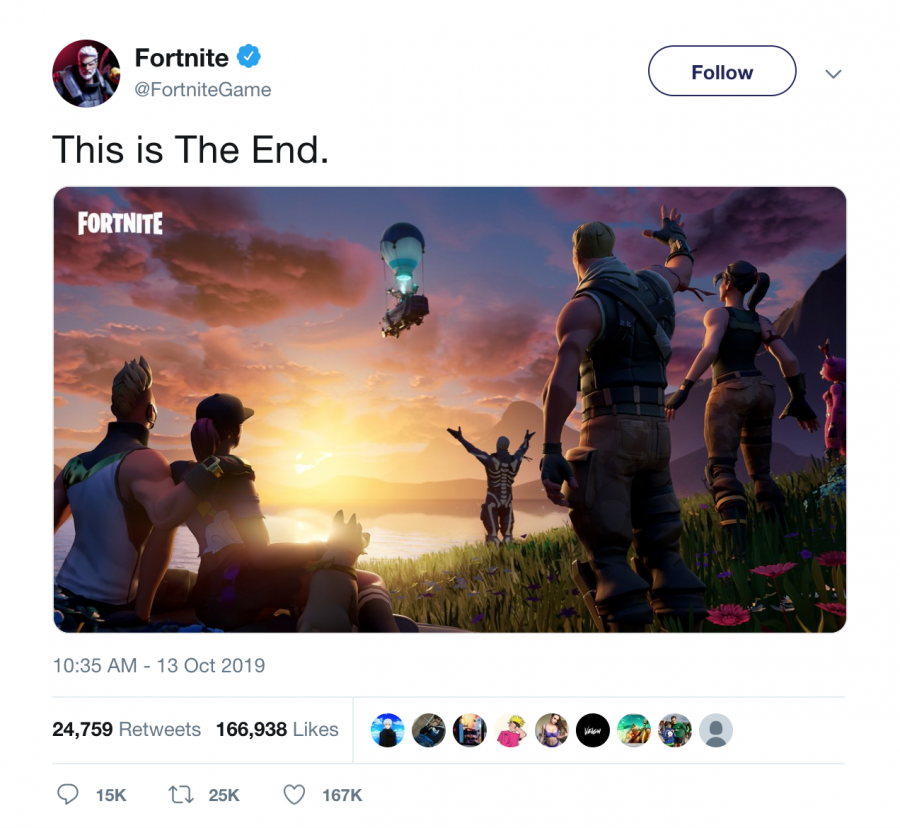 The first piece of evidence from Fortnite and EA since the black hole incident made players believe the game could have really come to an end.

With the black empty screens of Fortnite users plastered everywhere on the Internet for more than two days and no sign of Epic, a leaked chapter 2 trailer, everyone was on edge. Fortnite set up to have the map destroyed by rockets and sucked into a black hole, but why?

It was as if the game had vanished into thin air, but came back in 36 hours with exciting content featuring new weapons, goals and a new map. This marketing ploy was more than likely set up to gather attention to their game, and it most definitely worked.

According to an NBC news article written on Oct.16, 2019, even Fortnite’s social media accounts had been wiped and revamped after the second chapter release.

By making Fortnite users believe that the game was gone forever, the creators of the game were able to attract loads of attention for the second chapter release, which was exactly their marketing scheme.

These same sorts of marketing techniques have been previously used by IHOP (International House Of Pancakes). Teenagers and adults have been around long enough to see these companies try to gain new customers and recognize them.

In early June of 2018, IHOP changed their name to IHOB (International House of Burgers). As it says in the title, the food chain company had a new addition to their menu: burgers.

“It seemed like something drastic had changed but they only really just added a few burgers and milkshakes to their menu next to pancakes.” sophomore Phillip Bashore said.

By gaining attention to their companies, businesses are easily able to attract new customers and put their campaigns in the center of attention in the media.

“I don’t think it made a significant increase in sales, but it probably helped bring attention to their new burgers,” Lee said.

As many people become aware of these new changes or releases, the chaos goes to the internet to spread and post their opinions online.

According to an Oct. 2019 Quartz article, the viewership on Fortnite channels on Twitch went from an average of 675,000 viewers to over a million and a half views on the day the black hole was introduced.

Before the second chapter release, users thought Fornite was calling quits and titling it “The End” with more than 250 million users staring at empty screens as they logged in to play a fun game and relax with their friends.

Even though these tricks to gain awareness and hype up a new product or campaign may not work on everyone, they sure do attract a lot of attention and certainly work to earn new consumers.

“It’s impressive that people who know about these tricks in business gets sucked into the traps of these big companies anyways, but from the looks of how they present their new product, it seems very interesting, so I might have to try chapter two out,” Lee said.