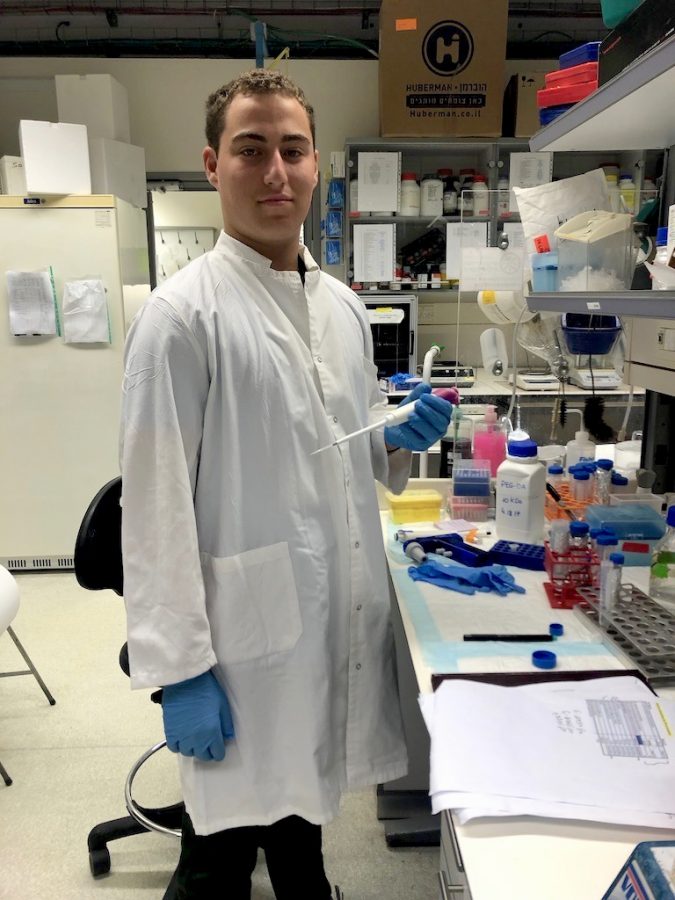 Dressed up in his white lab coat and blue gloves, Nathan Slotnik makes the most of his SciTech Scholarship as he holds a micropipette in the laboratory, ready to contribute to finding a cure for Duchenne muscular dystrophy.

William Shakespeare had once said “the world is your oyster,” but in a world of billions of people, it may be hard to stand out against the abundance of competition. However, for some people, standing out may come naturally; after undergoing the application process, WCHS senior Nathan Slotnik had been selected as one among 11 students within the Washington, D.C. area to be granted the SciTech Scholarship.

Over the course of the 2019 summer, Slotnik had been granted the opportunity and the scholarship to travel abroad in order to participate in the SciTech Technion, a summer program located in a mountainous area within Haifa, Israel.

“I was extremely excited about the scholarship because it’s an international program, so they only took about 60 kids,” Slotnik said. “I was fortunate to be one of these kids, one of the 11 from this D.C. area, and the only one from Churchill; it is extremely hard to get into.”

As a program of the Israel Institute of Technology, Slotnik had his 3 weeks scheduled to be spent in Haifa inside a laboratory researching Duchenne muscular dystrophy, a genetic disorder typically seen in boys. Interested in science and engineering, Slotnik had no problem in spending some time with his equipment and in a lab coat.

“I learned about how different genes are formed and made and how a disease can affect someone, so for Duchenne muscular dystrophy, it affects gene growth—muscle regeneration failure,” Slotnik said. “What I was doing was trying to figure out a cure for this disease by using equipment to inject the cure into the hydrogel and into the patient’s bloodstream.”

Although he did spend a large bulk of his time indoors doing his research, Slotnik also had other activities to pass the time.

This time was his opportunity to meet many other people of the program and a beginning for new friendships. As the program is accessible worldwide, there was evident diversity among his peers. Despite a majority of the kids being from Israel, Slotnik was soon immersed in an environment and surrounded by people of different ages and of different native countries.

“There was a diverse set of people there; there were a lot of Christians and Muslims,” Slotnik said. “It was mostly Jewish and most of the kids were from Israel—I had a labmate who was from Haifa, actually—but there were definitely many other religions and races there, too.”

Other attendees and peers of Slotnik came from countries such as Australia, Europe and the U.S., with all three countries having their own varied age requirements for those to be eligible to apply for the program. This furthers diversity in how rather than solely the variance in religion and race, there was one in their age too.

No matter the differences between these participants of the Israel Institute of Technology, they were all meant to gain valuable experiences from it. Whether it be meant to boost the student’s lab experience to help in college, heighten their experience with the world, or to just foster a memorable experience, it seems Slotnik had gained all three.

“I learned how to work in a lab, so that’s something I’ll have when I go to college when I take biology or chemistry. I also learned a lot about Israel and past heritage along with some of the current topics,” Slotnik said. “It was probably one of the best 3 weeks of my life because I met a lot of really close friends from all over the world that I still keep in touch with. I highly recommend going to this program.”

As far as Shakespeare’s saying goes, “the world is your oyster.” To Slotnik, however, it may just be his pearl. Being one of about 60 SciTech scholarship winners, he had the opportunity to bind his passion for science with his desire to experience something different.

“Overall, SciTech was a great experience,” Slotnik said. “Not everyone has this great opportunity, so by going, I was able to try something new.”