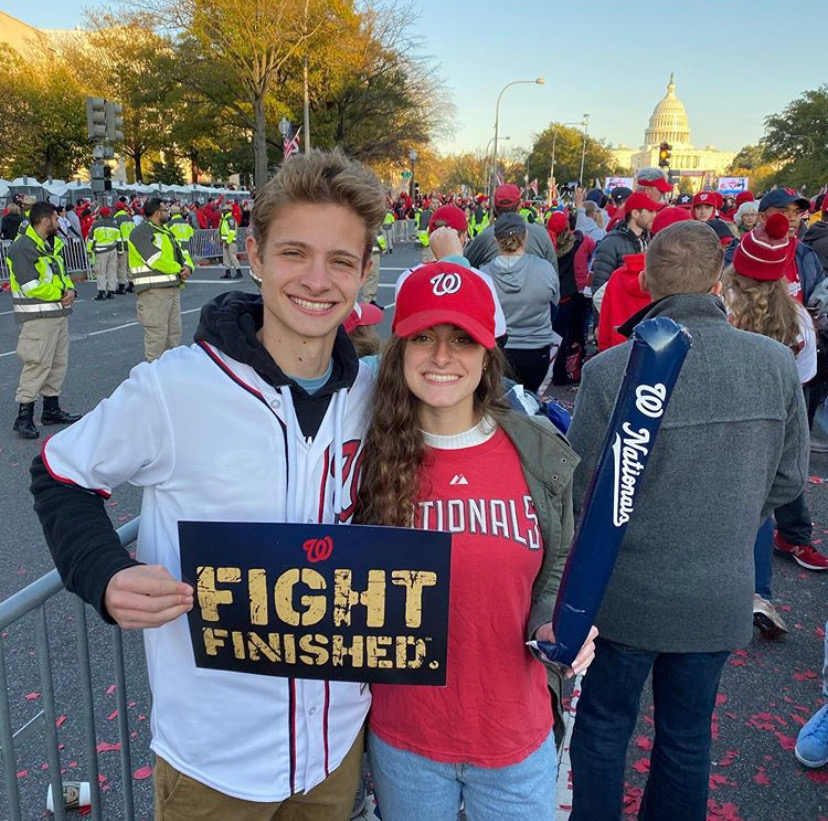 “Every season my dad and I go to at least 10 games as partial season ticket owners,” Ashe said. “I was nervous watching the final game between the Astros and the Nats, and for a while, I did think the Astros would win, but looking back, the comeback just made the win even sweeter.”

The parade was packed with many Nats fans similar to Ashe, as they gathered onto the sidewalk. In a double-decker bus trailing along the enclosed street, the D.C. baseball team was cheered on by the parade attendees. The event had been full of spirit and energy and, according to Ashe, much more organized compared to the parade following the Washington Capitals’ (“Caps”) 2018 Stanley Cup championship.

“During the Caps parade, all the buses where the players came all at once, while the buses during the Nats’ were spread out,” Ashe said, “I remember waiting over an hour from the beginning of the Caps to see players, while I only had to wait 10 minutes during the Nats parade.”

In fact, the Nats parade had been such an experience in itself, that now looking back, a number of people wish that they had come out and supported the triumph of the Caps. Mei Mei Zuo, a WCHS senior, discusses how the Nov. 2 parade had boosted her enthusiasm for D.C. sports teams and their victories.

“I did not attend the Caps parade, but I really wanted to,” said Zuo. “In hindsight, I wish I went it’s not every year that your team wins the national championships.”

Zuo’s words speak volumes, as this World Series will forever be regarded as the Washington Nationals’ first victory in all of MLB history. In knowing this, Zuo reflects on the opportunity of being able to attend such a monumental celebration.

“It was surreal to witness such a historical event; to bring a title back to D.C. for the first time in over 8 decades is still so incredible to me,” Zuo said. “I’m glad I was able to make it to the parade and celebrate with other Nats fans.”

With the interest in sports of national caliber, Ashe and Zuo, to an extent, serve as examples of the many people within the WCHS student body who support the Nats. There had been excitement flowing through the school the day after the Nationals’ miraculous win, and the hallways filled with eager discussions of the match and the vibrant red Nats jerseys—much like the parade.

“People were decked out in Nats gear and had posters and all,” Zuo said. “When the buses came around, everyone started cheering louder, clapping their hands and such.”

Looking back, it would have been hard to not have fun at an event with red ticker tape excitedly showering the truck of renowned and victorious D.C. baseball players, especially when they are actually visible to the audience.

“I really liked watching Max Scherzer get on top of the roof and start doing the baby shark dance,” Zuo said. “And when Zimmerman came with the trophy, everyone started cheering and there was ticker tape everywhere; Zimmerman actually got off the bus and took the trophy with him to the fans.”

The excitement of the win is only heightened by the fact that this is the first-ever World Series accomplishment for the baseball team since its relocation to Washington in 2005. Even so, the D.C. victory is also a silent win for WCHS students and teachers, the outcome of the game bringing a sense of pride and spirit into the school.

Both Ashe and Zuo, having attended the parade with their respective families, found that the parade was a fun event for family bonding and for indulging in the Nat support. Although the Nationals were hardly expected to win this season, these underdogs had shocked the world with their comeback.

“I thought the parade went well; there was an amazing atmosphere and fun nature,” Ashe said. “And I think their comeback was a good summation of their season—they had to work their way to succeed.”