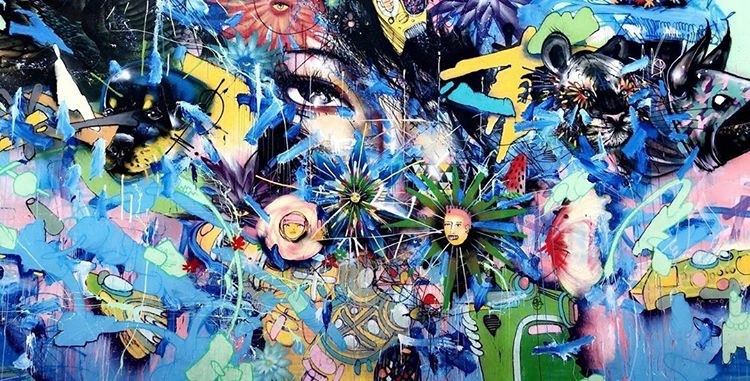 The streets of big cities, such as Washington D.C. or New York, often depict unique graffiti on the walls. Sometimes, it is just simple graffiti, like a random word, but other times it is truly a work of art.

Graffiti art started on the streets of New York City in the late 1960s, originally in the form of words, numbers or symbols. This trend grew in popularity as many artists decided to “tag” public property for style recognition. Years later, it has evolved into urban artwork that depicts real images and light artwork. Street art continues to evolve with each art piece customized in its own way.

“It is really interesting to see such amazing pieces of art on the street and outdoors,” sophomore Julia Hadad said. “Some of the best artists in the world painted their murals in big cities, such as Wynwood Walls in Miami. It is so fascinating to witness that.”

Street art is most commonly used to make public statements about society. It is often displayed on buildings and streets within communities where the artwork is seen and appreciated by the people walking by. The change in perception from street art as vandalism to artistry shows its strides towards becoming socially acceptable.

These pieces of artwork raise awareness as artists gain a platform through their work in advocation of social and political issues going on in a community, nation or even the world.

Many artists have used their canvases to portray their political feelings, such as those towards the Trump administration or to advocate for Syrian refugees.

“I enjoy seeing others express their opinions on murals whether its on a wall or a side of a building,” sophomore Kayla Park said. “It is important that everyone should have a chance to convey their thoughts and feelings not just with their voice, but through art or any other form they enjoy using.”

One of the most well-known places for street art is Union Market in D.C. Not only is it a popular hang out place for CHS kids, but its colorful murals make it perfect for a great photo.

One of these murals depicts a collection of multi-colored hearts on a wall. On the wall next to it, the quotes “Follow Your Heart” and “Never Give Up” are displayed in big letters. Last year, recording artist and peace activist Yoko Ono displayed a mural with a quote saying “Relax, Your Heart is Stronger Than You Think.”

“It’s nice to see modern art for free,” Park said. “The art in Union Market is inspiring and motivational.”
Another example of street art very popular among teenagers is the mural of wings, which is part of the Global Angels Wings Project.

This project was started by Colette Miller, a famous street artist born in Va., and is featured in countries like Kenya, Mexico, Cuba, France, Australia and more.

Her goal in creating the Global Angel Wings Project is to remind humanity that we are the angels on this Earth. She wanted to create something uplifting for humanity as a whole, so she places these wings in neighborhoods that need some moral uplifting, in hopes that they will provide enlightenment, hope, freedom, purity and flight. These wing murals have gained popularity as they allow viewers to be a part of the art.

“Murals can make someone’s day, motivate someone or prevent them from doing something that they shouldn’t do,” Park said. “That itself is very important for society.”

During break, many CHS students visit Miami, Fl. and one of the most famous places to enjoy street art: Wynwood Walls.

Wynwood Walls features numerous pieces of art perfect for posing for Instagram photos. It was created by Tony Goldman in 2009, who liked the idea of changing large warehouse buildings into giant canvases.

Some of the art featured ranges from political cartoons to bursts of colorful abstract paintings. The art at Wynwood Walls is unique and visually appealing, making it very popular amongst CHS students on social media. It is important that CHS students are informed about what our local art scene has to offer.

Additionally, uprising CHS artists don’t have to get featured in art museums to express their work, as opportunities to gain an artistic platform are all around us.

“It was just as breath-taking as visiting [Wynwood Walls] the first time,” Julia Hadad said, after making her second visit to Wynwood Walls this spring break. “Anyone, no matter how old they are or how interested they are in art, would enjoy walking through and seeing such beautiful artwork.”