Junior has cards up his sleeve with self-made company 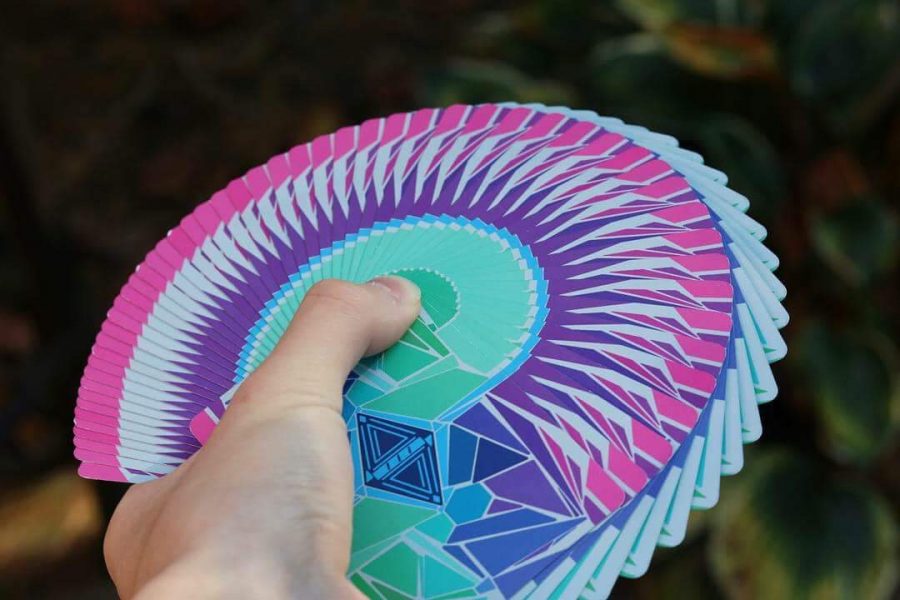 Card tricks are a staple of a magician’s deck of performances.  Many magicians are able to put on impressive performances due to their ability to use cardistry, the art of manipulating cards in a way that is both visually impressive and seemingly hard to replicate.

For CHS junior Bryan Fang, he has taken his interest in cardistry to the next level.

“Cardistry is cutting cards, shuffling cards, fanning cards and more,” Fang said. “It’s basically all the fancy card work that magicians do, but without the magic tricks.”

Fang originally started out practicing magic, but after a year realized that what he truly enjoyed was the cardistry.

According to Fang, it is common in the magic community to shift from focusing solely on magic  to specializing in card work. Cardistry tricks are commonly known as flourishes.

Fang found his inspiration for cardistry by watching famous cardists online through various social media platforms. His all-time favorite cardist is Tobias Levin, who is popular on YouTube and Instagram for his card skills.

“A good way to practice cardistry is to repeat a flourish a lot until it feels nice and comfortable,” Fang said. “It’s good to watch other cardists perform, so you can use them as inspiration to create your own moves.”

A deck of cards is all you need to begin your cardistry journey. Therefore, Fang decided to create his own cardistry brand called Hunkydory that makes playing cards and clothing.

“[Bryan’s] love for cardistry has grown exponentially in the past few years and I really like that he has transferred his love for cards into a brand he shares,” junior Justin Jin said.

According to Fang, the name Hunkydory comes from the title of his second favorite album by David Bowie.

About a year ago, Fang designed his Tessellatus Playing Cards, Hunkydory’s signature cards, with a vibrant-colored mosaic design on both the front and back. Fang then contacted printing companies about pricing and inquired if they would print his cards for him.

“United States Playing Card Company, the [same] company that prints Bicycle cards and other popular decks, agreed to print with me,” Fang said.

Fang started a Kickstarter page to help fund his cards and ended up raising over $23,000. He exceeded his original goal of $5,000, thanks to the 645 individuals who backed his company.

“Bryan has been successful because his designs are new and creative,” junior Payam Moayed said. “He did it by himself and that’s really impressive.”

Moayed owns both a Hunkydory hoodie and a deck of cards.

“Bryan is one of the funniest kids in school,” Moayed said. “If you get to know him, you’ll want Hunkydory merch. It’s like letting people know you [support] Bryan.”

Jin, also a friend of Fang’s, owns a hoodie, cards and a poster from Hunkydory.

“Even if you don’t care much about cards, Hunky dory has apparel designs that are really dope,” Jin said.

Cardist companies and other customers have also been pleased with Fang’s design.

According to his Kickstarter page, Fang’s deck has it all, especially an amazing color palette for fans.

Fang’s support is centered at CHS, but he has had purchases from individuals in Singapore, Brazil, Germany, the United Kingdom and the Netherlands. Many of his backers come from cities like Sydney, Brisbane, Toronto, Oslo and Mexico.

“Bryan’s success comes from his passion for the things he loves,” Jin said. “Although his brand [has been] successful, Bryan [isn’t focused] much on the sales, but rather cares about sharing what he created.”