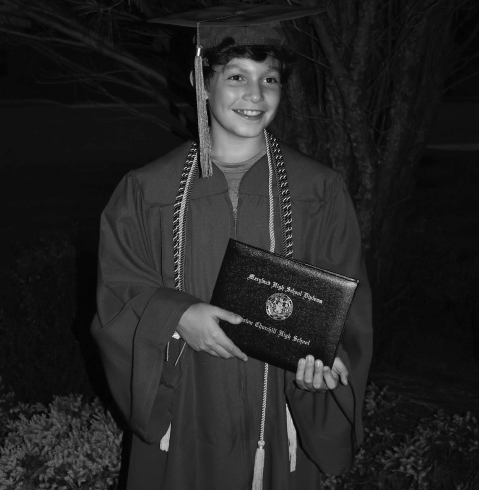 There are positive and negatives when it comes to Early Graduation. Pictured: Justin Greenzaid, 6th grader at Cabin John MS.

Everyone sees high school as a four year adventure where you take risks, try new things and seize new opportunities while gaining lasting memories, but for some, that journey may end early.

Graduating early is assumed by most teens to be an unattainable idea; the workload and the idea of missing senior year discourages students from pursuing early graduation. Still, some students decide to make the big jump.

Despite the effort needed to be put into graduating early, it can be a worthwhile choice for some.

“It’s less than a month’s work combined if you put all the hours together,” said now-senior Adam Rosenbaum who plans to go to Israel after this year to work and find internships. “But then you get a free year of extra time just delivered to you on a silver platter, so I’ll take it.”

Early graduation has a lot of components to it that people may not even think about. There are many steps students must take in order to get approval for earning their high school diploma before originally planned.

“You have to write a plan for what you’re going to do after you graduate, and you have to send it to the counselor who signs off on it and who then sends it off to the principal,” Rosenbaum said. “That has to be sent to the county, and that waives your last year of high school so you don’t have to do it — you’re technically a senior after your sophomore year.”

According to a College Confidential article on early graduation, college admissions boards are more likely to scrutinize an early high school graduate’s application than a student who completes four years. Because of this, the student’s counselor has to sign off on their plan for after they graduate early once they know they’ll receive all their necessary credits before senior year in order to assure the student can truly graduate early.

Many believe that because they graduate early, the students who miss their last year completely miss out on all that senior year has to offer. However, that is not necessarily the case.

“That’s sort of misleading because you don’t actually miss your senior year,” Rosenbaum said. “You don’t have it with your grade year but you still go to prom, you still get the senior privileges, and you’re officially a senior in all the books.”

Early graduates are labeled as a “senior,” instead of a junior, during their last year in high school in official documents.

“The whole label gets kind of confusing because I will officially be a senior at the start of the second semester, but as of now, I guess I’m still a junior,” said junior Bella Estes, who hopes to join a ballet company upon graduation.

Families or guardians are usually supportive of what their kids aspire to achieve. When it comes to early graduation, it’s no different.

“My whole family is super supportive and helps me out. They were the ones who told me about graduating early and got me interested in it,” Estes said.

Not many students graduate early from CHS every year and most of the work and planning they have to do is done with their counselor.

“It has to be kids who really plan for it because they have to work with their counselor every year,” Principal Joan Benz said. “They still need the 22 credits in all those areas and your condensing them into three years instead of four so that takes a lot of coordination between the student and counselor to make sure that student is getting everything that they need in order to graduate a year early.”

According to Benz, MCPS discourages early graduation because they feel that in most cases students need all four years and to get that many credits in three years is a lot more stress.

After their senior year, their third year of high school, early graduates can apply to college, take a gap year, or pursue whatever they chose to do after they decided to graduate early.

“Graduating early will help me not have to worry about completing high school online,” Estes said. “Hopefully I won’t regret it. I may think about it, but I’ll know I did the right thing.”