Math Plus Music is a Sure Formula for Success 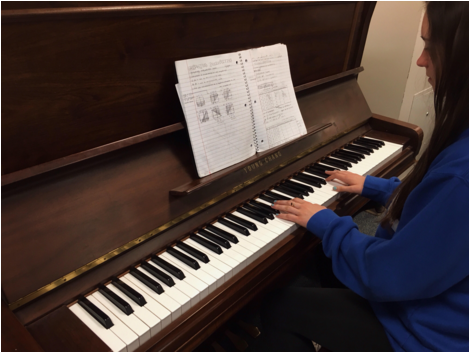 Freshman Danielle Menkart practices the piano. Recent studies have linked the use of music while learning math skills to an improvement in basic math proficiency.

Although it may seem that because math and music are different subjects they would have little correlation, math and music have more in common than one may think.

Math is a huge part of life inside and outside of CHS. Students begin learning math when they first begin school, and it is usually taught in the same, generic way. Now, however, the idea of using music to teach math has been brought into the equation throughout the U.S.

“This is not a new connection,” math resource teacher Audrey Phillips said. “I have heard there is a connection between math and music [and] certainly see the connection with fractions, whole notes, half notes and fourth notes.”

According to an April 2016 Washington Post article, jazz composer Herbie Hancock has discovered that there is an intrinsic link between playing music and building objects and ideas. Other researchers have also experimented with music and rhythm to teach fractions and proportionality in classrooms.

The reason math and music are so similar is because they are built on the same concepts of repeating patterns and matching.

According to a 2016 Scholastic Math in Music and Movement article, the acquisition of math skills follows a developmental sequence where students learn structure by seeing the relationship of two mathematical concepts. In music, children use perceptual and auditory skills to match pitches and tempos; these connections can be made by changing the variables in a song or call and repeat, similar to changing the variable in a math or science problem.

According to the website Math Central, a site developed by the University of Regina for math students and teachers, musical pieces often have repeated choruses or bars, similar to patterns, and musicians look for notes they recognize to find high or low notes, similar to when students look for patterns in math to explain and predict the unknown.

Students at CHS who are able to recognize patterns among musical pieces tend to be better at linking math and music together due to the way the patterns of music and math relate to one another. Moreover, their ability to multitask with music translates into easier ability to work more efficiently in math.

“With both hands going on piano, you need to know what both hands are doing [and] it forces your brain to work more efficiently,” freshmen Eirena Li said. “It’s like the whole idea of site reading that helps to multitask and work faster with [multitasking] in math.”

Because some are more apt at picking up music than math, the hearing component of understanding music and then using that to connect to math benefits students. The whole concept of math and music being entwined will help them to learn to their strengths.

According to an April 2016 Washington Post article, Susan Courey, a professor of special education at San Francisco State University, the teaching style of using music to teach math “goes across language barriers, cultures and achievement barriers” as well as “offers the opportunity to engage a diverse set of students.”

Though they may not realize it, musicians use math and music together all the time when rehearsing music and practice new sounds.

According to the Kennedy Center Artsedge website, beneath the sound of the notes are math concepts and rules, such as when a musician counts out the number of beats per measure of written music. Because setting the pace and counting helps musicians to play by themselves and with other musicians, math has a huge role in facilitating their ability to carry out this action.

The idea of music and math being intertwined, although not yet implemented at CHS, is an eye-opener into the future ways of teaching mathematics.

According to a Teacher Vision website which provides teaching material and resources for teachers, math can be implemented as schools like CHS by teaching students patterns in music that relate to mathematical sequences, such as the Fibonacci Sequence, in order to help them learn how to solve music and math problems by recognizing patterns, or by tasking them with deriving a mathematical formula from pieces of jazz music.

“With all the discoveries being made about mapping brain activity, this may become something important in the future,” Phillips said.