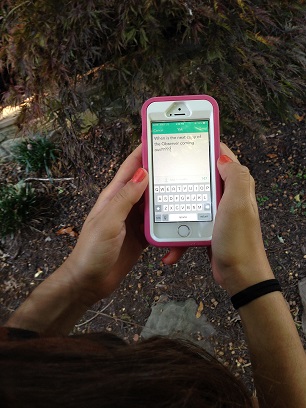 By Julia Heimlich and Thomas Atkinson

Everyone knows the rush of excitement that often accompanies a Facebook or Twitter post receiving attention. The idea of posting personal thoughts on the Internet without judgement or feedback, however, is something most people are not accustomed to.

The recently-developed social networking app, Yik Yak, provides an opportunity for students to express their own ideas while remaining anonymous..

“Yik Yak breaks down social barriers to build communities,” said a company representative, who wished to remain anonymous. “Using geo-location technology to track chatter in a given radius, Yik Yak provides a forum for any person to post questions or comments and engage in genuine, unfiltered conversations with those nearby.”

Yik Yak was developed by Brooks Buffington and Tyler Droll, two Furman University graduates who wanted a new way to connect with people.

“With a majority of citizens communicating via mobile devices, we recognized the importance of a localized forum that could be open to anyone to discuss events, issues and general happenings in the area,” the representative said.

The app has gained popularity quickly due to its new approach and unsourced postings.

“Late at night, it can get pretty funny,” sophomore Dylan Whittaker said. “Before football games you see what clever remarks each school has about each other. It’s also fun to see how many ‘ups’ you can get, and if you can make it to the hot page.”

An “up” is a when someone upvotes a yak by giving it a point. A person’s yak gets votes depending on its quality. Yaks with unpopular opinions get downvotes, making the score less, even putting it into the negatives. If a yak gets more than 5 downs then it will be deleted.

Some may have concerns about problems with cyberbullying, but Yik Yak developers have taken precautions to ensure the best possible protection for users.

According to the representative, those within a close proximity of a primary or secondary school cannot access Yik Yak to prevent younger people from using it. The app additionally monitors potentially harmful or negative posts, and blocks or bans users who seem to participate in this kind of behavior.

“We continue to build out this technology to ensure positive interaction, but we are also finding that as more users sign up and start using the app, each community begins to self-regulate itself in a positive way,” the representative said.

“I’ve seen Yaks that put people down, but they always get ‘downed’ and eventually reported, so very few people end up seeing them,” Naimi said.

Regardless of how safe the app claims to be, Yik Yak users should always remain aware of the dangerous of anonymity online.

“Any time someone is doing something anonymously, they’re hiding,” Principal Joan Benz said. “They feel like they can say anything because they won’t get caught or identified.”