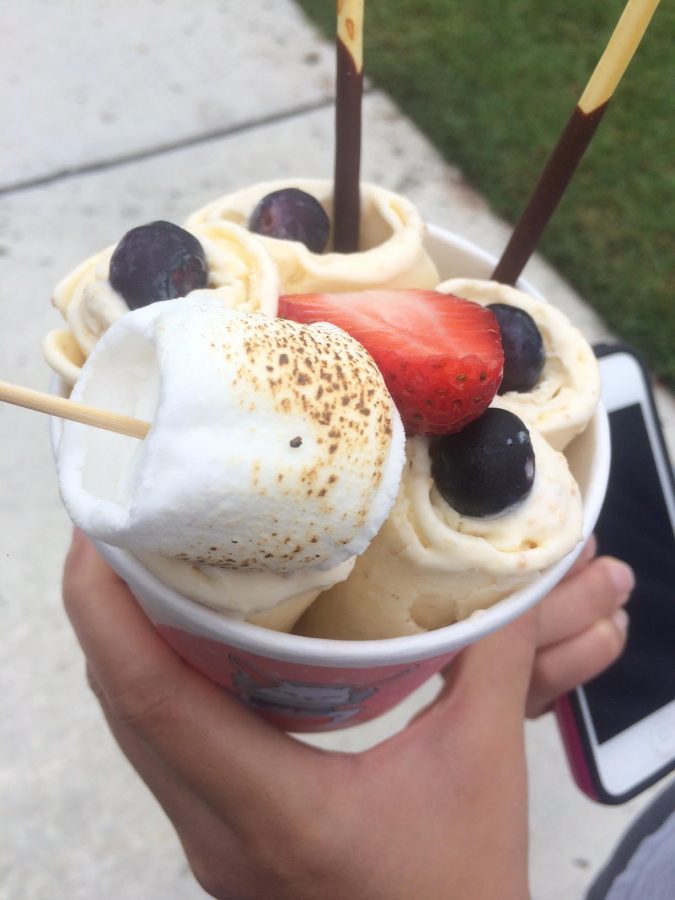 An example of what one can order and personalize at Class 520 ice cream shop that just opened in Rockville.

Class 520, a popular dessert hangout, just opened in Rockville. The shop sells Thai ice cream rolls, a trend that is popular in New York and other major cities, and has now been brought to Maryland.

Thai rolled up ice cream is made on an extremely cold metal circle. The liquid base is manipulated between two spatulas then spread out across the circle. Once the ice cream is evenly spread out, a spatula is used to turn strips of the ice cream into rolls by scraping it off the metal.

According to Paste Magazine, the trend started tiptoeing into the States last year from Southeast Asia, specifically Thailand, Malaysia, Cambodia and the Philippines, where the treat is often sold by street vendors.

“I thought that the process was very cool and unconventional compared to the usual American ice cream process,” senior Morgan Robinson said, “you watch them make the ice cream before your eyes and some of the toppings are infused as opposed to just [being put] on top.”

The unique creation of the ice cream continues to amaze people each time they order.

According to the manager of Class 520, the store is popular in cities like Philadelphia and New York, so Class 520 believed it would be successful in the DMV area.

Once word came out that Class 520 was opening, the Class 520 Facebook page received a huge amount of RSVP’s to their grand opening.

“I definitely think I’ll be coming back. Not only is the ice cream good, but the price is great for how much you get!” junior Jackie De Melo said.

Class 520 will definitely become a staple in the DMV area, as it has in many other major cities.