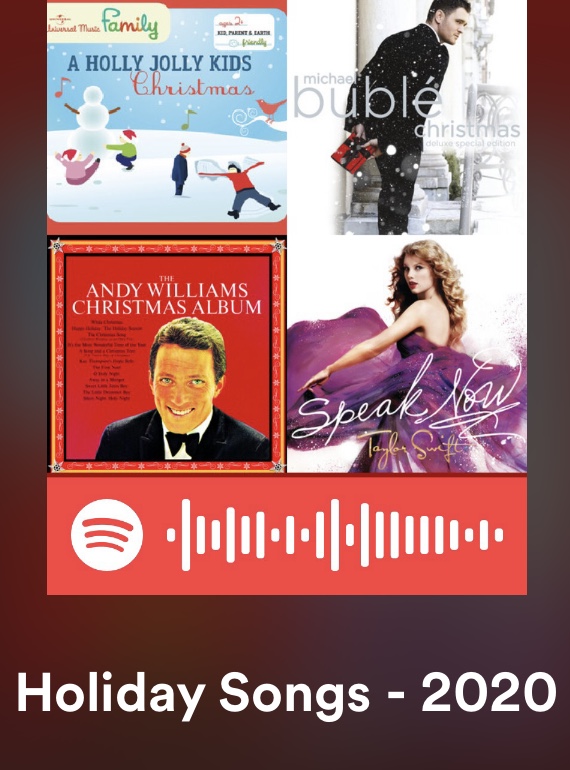 With the holidays in full swing, The Observer staff song picks are sure to get you into the winter spirit. Featuring from Taylor Swift to Andy Williams, this playlist is full of no-skip songs.

Are you getting sick of Fall and ready to dive into the winter spirit? Are you looking for a way to emerge yourself in the holiday season? The Observer staff has selected their favorite holiday songs and are ready to share them with you. This list includes some holiday classics, like “It’s the Most Wonderful Time of the Year” to more recent tunes, like the “Jingle Bells” trap remix. Whether released in the 1960s or 2010s, these songs do a perfect job of encapsulating the soul of winter.

Scroll to the bottom for our completed Spotify playlist.

“The sweet and old timey sound of the song feels like pure holiday and nostalgic energy. The song overall is just a banger. Everything from its sing-along-able lyrics to it’s great beat is extremely enjoyable and makes it an essential holiday listen.” – Quinn Cook, News Editor

“Michael Bublé’s Christmas music covers are classics that will get any listener into the spirit. This song is perfect because it vividly describes a decorated town at Christmas and can make anyone feel like they are in a far away perfect place.” – Rachel Mattison, Assistant Advertisements & Subscriptions Manager

“This song is a perfect combination of country vibes and the holiday season. This slower romantic song emphasizes the importance of togetherness during the holidays.” – Ally Salzberg, Opinions Editor

“This song is really upbeat and can remind anyone who listens to it of the holidays and why they are so lovable.” – Ryan Weiner, Assistant News Editor

“Lights On (feat. Ryan Beatty & Santigold)” by Tyler, The Creator

“This song was released on Tyler, The Creator’s companion album to The Grinch (2018). Combining elements of pop and rap, this song tells a story of distance and hope, while still managing to keep things ‘light.’” – Trevor Gardemal, Social Media Manager

“All I Want for Christmas Is You” by Mariah Carey

“This song, originally released in 1994, is an iconic Christmas tune. In 2019, the song topped the Billboard Hot 100, 25 years after its release, which broke several records. It is uptempo and catchy, while still drawing from styles of previous decades, and is perfect for a fun holiday sing-along.” – Emily Zhang, Features Editor

“‘Rudolph the Rednosed Reindeer’ is a classic kids Christmas song written by Johnny Marks in 1939. The original soft tune is enough to warm you up on a snowy afternoon, but the trap remix adds a bit of a modern twist to the oldie and makes you want to bust a move.” – Nur Yavuz, Features Editor

“It is not truly the holiday season without listening to Michael Bublé’s Christmas album. The jingle bells and chorus singers in the background will without fail get listeners in the holiday spirit.” – Olivia Yasharoff, Arts Editor

“Santa Tell Me” by Ariana Grande

“This song will surely get you in the holiday spirit. It is perfect for Ariana fans and pop music lovers.” – Ava Freeman, Online Editor-in-Chief

“‘Mistletoe’ was released in 2011 by popstar Justin Beiber. The romantic jingle is extremely catchy and cute, listing cute traditions that couples tend to celebrate over the holidays.” – Allison Jacobs, Editor-in-Chief

“This song was originally written by Felix Bernard and Richard B Smith, but many other artists have covered it. The Michael Bublé version from 2011 paints a perfect picture of a lovely winter night during the holiday season.” – Jordan Pashkoff, Assistant Online Editor

“The classic song ‘Sleigh Ride,’ released in 1950, was later remixed by Trap City in 2017, under the name “Sleigh Bells.” This remix brings together the timeless sound of “Sleigh Ride” with a modern beat and energy. Because the lyrics are so well known, it is the perfect song to sing along to, but also to jam out to as well.” – Charley Hutton, Advertisements & Subscriptions Manager

“Even though the song isn’t very popular, it really captures the time of year. While most holiday songs talk about the present, Swift takes listeners back to simpler times when they were children. While she sings about growing up on a farm, most people can share the excitement they felt as a child when they woke up to snow.” – Jessica Klein, Assistant Arts Editor

“Frosty the Snowman” by Gene Autry

“The song was popularized from the movie of the same name. Nothing says December like hearing about a snowman ready to bring joy.” – Jeremy Fredricks, Copy Editor & New Staff Liaison

“This song is so underrated. Many students have grown up watching ‘Dr. Suess’ How The Grinch Stole Christmas’ and listening to Busta Rhymes. Jim Carrey spitting bars while the classic song is playing in the background makes this song a memorable take on a fan-favorite.” – Aaron Simon, Photo Manager

“Back to December” by Taylor Swift

“Let’s say that you’re not in the Christmas spirit but still want to listen to holiday-esque/winter music. Swift’s old song ‘Back to December’ definitely puts you in the mood to drink hot chocolate by the fire.” – Melissa Redlich, Sports Editor

“Rockin Around the Christmas Tree” by Brenda Lee

“This is a very underappreciated song. It is so catchy and upbeat. It is the best song to get you in the Christmas mood. The holiday spirit and nostalgia is unmatched.” – Andrew Chan, Editor-in-Chief

“Being a classic artist in 2020, it is no surprise that Bieber’s Christmas EP ‘Home for Christmas’’ is going viral. With TikTok dance trends and much love all over the internet, this song is already a hit.” – Ella Kaminsky, Opinions Editor

Check out The Observer’s Spotify account @wchsobserver and listen to our playlist “Holiday Songs – 2020” to listen to these spirited tunes all winter long.