Wonder Woman Is a Sight to See 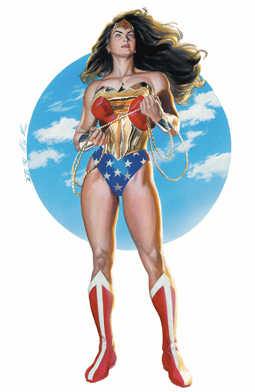 When “Batman V. Superman: Dawn of Justice” came out, many fans were excited by the appearance of Wonder Woman (Gal Gadot). Throughout the movie, she aids Batman (Ben Affleck) and Superman (Henry Cavill) in their attempts to defeat Doomsday, a monster created with Kryptonian technology.

DC, the comic book giant that created the Justice League, including Batman, Superman, and Wonder Woman, said the movie also served as a Wonder Woman teaser–which was established as its own movie recently. Abandoning the cringey female superhero stereotypes, Wonder Woman is a triumph on the big screen, starring in “Wonder Woman.”

The movie stars Gadot as a 5,000 year old Amazon princess who finds herself in the midst of World War II.

The origin of the movie is rooted in Greek mythology. The myth is centered around the Amazons, an immortal race of women blessed by the Greek gods to possess superhuman strength, near immortality, and flight. They live on the island of Themyscira. Diana (Gal Gadot), an Amazon woman, is a princess on the island. She is given magically indestructible steel bracelets and the Lasso of Truth. When touched, the Lasso forces those in contact with it to speak honestly.

The background of Greek mythology is central to the movie. It begins in present day Paris, with the majority of the movie serving as a flashback to the World War I era. Steve Trevor, (Chris Pine) an Allied spy, crash lands on Themyscira. Using the Lasso of Truth, Diana learns about WWI. Believing an ancient Greek god is the cause of WWI, she travels to the outside world to fight against him.

The movie is directed by Patty Jenkins, who previously directed the movie “Monster” (which won Charlize Theron an Academy Award). DC made an appropriate choice, considering Jenkins’ strong background.

Choosing a female director was a strong choice based on the failure of the last DC female superhero movie “Catwoman.” Perhaps the lowest point in DC movie history, Catwoman was grotesque, strange, and set an incredibly low bar for superheroines.

Wonder Woman’s only commonality with Catwoman is the female lead. With perhaps one of the strongest plots in the DC Universe, Wonder Woman brings charm and depth to match its visual effects.

Gal Gadot perfectly portrays the foreign Diana, who is naive about the “modern” world in the film. Her timing and acting is graceful, and she fills out the role incredibly well.

While she learns about the complicated human world and transforms into a defender of justice, she hunts down Ares, the god of war, and her mortal enemy.

Ares serves as the villain of the film, but is perhaps one of the more disappointing DC villains. Superman has Lex Luthor, Batman has the Joker, and Wonder Woman has… a poorly developed Greek god? This may be because the movie strikes a different tone from the gloomy and edgy lives of Batman and Superman. Instead, it manages to feel less like the story of an overpowered emo teen, and more like a superhero movie.

Although Ares is mentioned in the film, his character neither evolves or is given much screen time. The enemy is not apparent within the film; although Diana is convinced that she must fight and destroy Ares, she believes he is a specific German general, and believes that killing him will end the war.

Later, it is revealed that that Ares was actually a member of the British War Cabinet, where he was trying to lengthen the war and heighten the casualties.

In the climactic scene, after Diana has witnessed the horrors of war, Ares tries to convince her to abandon the human race and exterminate them completely. Steve sacrifices himself to save the Allies, and Diana is inspired to fight and defeat Ares instead in a mildly overdone CGI climax.

But at the end of the day, the movie was good. Really good. DC may be known for its occasional high points and numerous failures, especially in recent movies. But with a strong storyline, compelling characters, and a breakout performance from Gadot, this movie has definitely set a new standard for DC and superheroine movies alike.