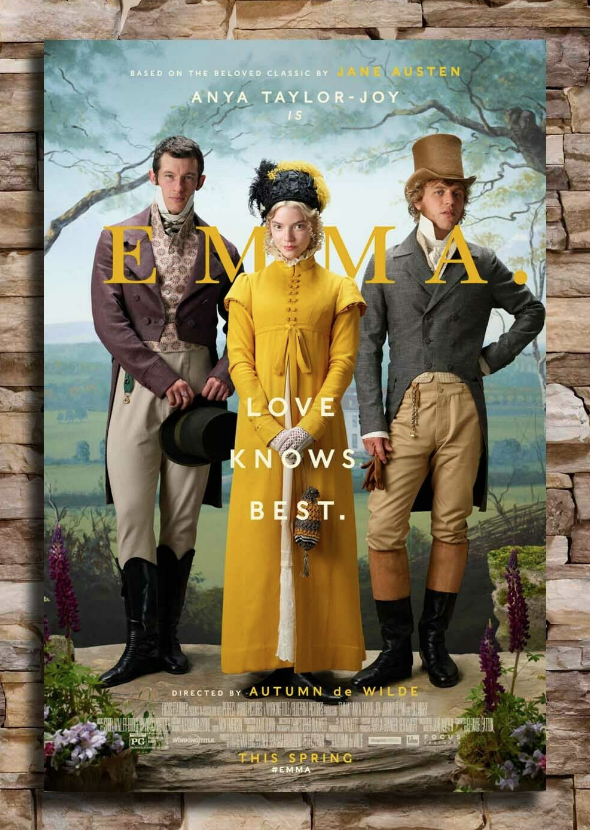 Jane Austen's beloved rom-com "Emma" was released in theaters on Feb. 21, 2020. In the film, Anya Taylor-Joy stars as Emma.

There is no single term that can quite define Emma from Jane Austen’s beloved rom-com “Emma” but wide-eyed, analytical, single-person-turned-lover, neat-freak and lover-of-all-things-beautiful are fitting descriptors.

From the get-go, Emma (Anya Taylor-Joy) shows that she is a woman of order, power and beauty. Taylor-Joy shows off her chops as an actress. She appears as if she has stepped right out of a 19th century novel. With fabulous eye rolls, intense gazes and a confident demeanor, she is the definition of perfection. But one person sees through her confidence shield: her brother-in-law, George Knightley (Johnny Flynn).

Knightley’s relationship with Emma is by far one of the best parts of the film. She refuses to get married but enjoys pairing off her family and friends. She is so very perfect and vain that it is irritating, and in the beginning, it is difficult to relate to her character. Knightley is seemingly the one person in her life who is unafraid to call her out when she is in the wrong. This intrigues and frustrates her, and ultimately pulls her to him.

Directed by Autumn de Wilde, this new adaptation of the novel has a modern flair that comes from the film’s outstanding actors and the dialogue between characters. Emma is independent and loves it. The way that she keeps to herself and prefers the single life over matrimony is a very 21st century way of behaving and thinking; on the other hand, the way that she talks and dresses keeps her solidly in the 19th century. She’s interesting and unpredictable, and it adds to the movie’s charm.

Emma’s friendship with Harriet Smith (Mia Goth) is the most crucial point of this film, since Harriet brings out Emma’s softer side. Emma invites Harriet into Hartfield (her home) several times, impressed by Harriet’s sweet-natured, warm-hearted personality. Harriet teaches Emma the value of friendship. As is Emma’s nature, she tries to match Harriet with a man named Mr. Elton. But, to Emma’s surprise—since she’s used to being right—the match just doesn’t work.

Although the match doesn’t work, many things work well in this movie. The author and the director master the art of being hilarious or serious at the same time. You’ll see a teary-eyed love confession at the same time as a nose-bleed. You’ll see two characters kiss in secret while two bodyguards stare at them in shock and without shame. One minute, viewers will find themselves crying with the characters, only to start laughing in the next scene.

In one of the last scenes of the movie, Knightley asks Emma, “With whom will you dance?” And finally—while viewers collectively sigh in relief after almost two hours of anticipation, waiting for this moment— Emma says that she will dance with him. They dance, it’s beautiful, and it feels like the happy ending that we’ve all been waiting for.

The costumes are as important to the movies as the setting. Emma wears several different outfits: satin gloves, long skirts, fancy dresses. Knightley is dressed in a thick black suit, which looks uncomfortable at times, but he rocks it.

The film itself rocks. It is ranked 84% on Rotten Tomatoes, but it honestly deserves better. I adored this movie, and had not expected to. I’d put it right up there with “Little Women” and “Portrait of a Lady on Fire.” These three movies feature fabulous female stars, great dialogue and a deep meaning behind the storyline. The deeper meaning is the reason why movies like these may leave lasting impressions on us, unforgettable in our hearts.

By the end of the movie, Emma realizes at the same time that we do: There’s so much chaos that comes from the idea of “perfection,” and there’s so much perfection that can come out of chaos.