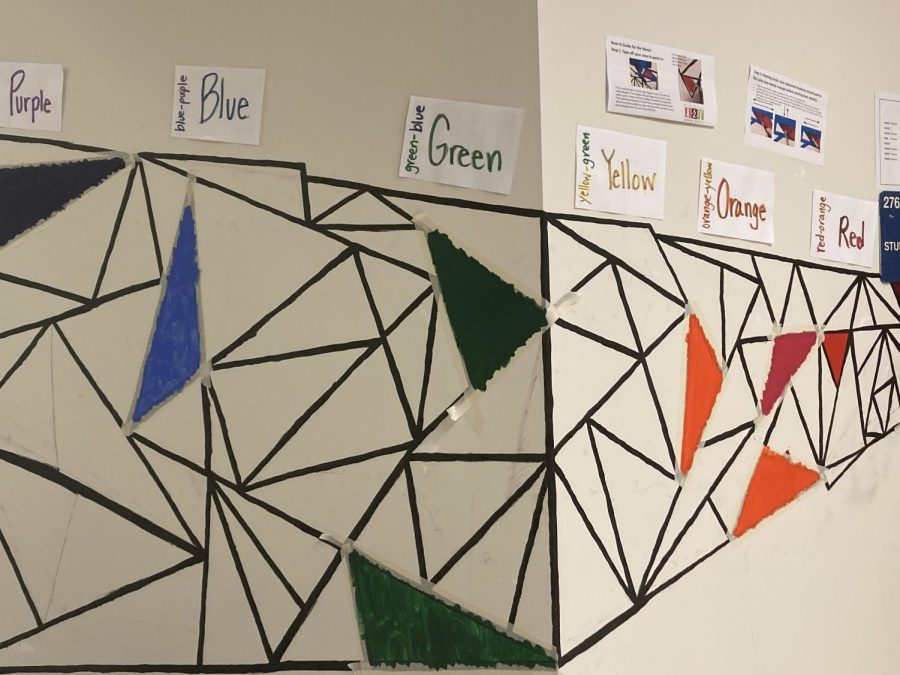 A wide-angle shot of the WCHS chapter of the National Art Honor Society's mural outside of room 276 on Feb. 3. Students in the honor society are working on the mural, which consists of triangles growing larger as they move away from the door.

Across from the cabinets displaying student-artists’ works, used to sit a blank, empty white wall. Juxtaposing the pop-of-color in the cabinets with the color-less wall had its time, but now things are changing.

The WCHS chapter of the National Art Honor Society (NAHS) has been working with a blank canvas, actively turning it into a mural. A key component of NAHS is community service through art and this year they wanted to increase that service.

“The main themes of it that we’ve selected are about art being a form of self-expression and art being a way to build community and arts being used as kind of a positive force in our lives,” NAHS teacher-sponsor Dana Mooney said. “To have this mural kind of be a connection between some of the art rooms and to give students a chance to…leave some of the artwork here on the walls of their school and have that self-expression kind of there.”

The mural is composed of triangles, growing larger as they stretch out from room 276. The color scheme stretches from red near the door to purple at the end, followed by students’ choices of design and a variety of colors. Mooney said that she and the officers chose the triangle design because all NAHS members, regardless of their painting skills, could participate. It was inspired by other murals from schools and communities, artwork from Philadelphia; where Mooney grew up; quotes found online; and murals painted after George Floyd’s death in 2020.

“A lot of artists have murals as part of healing for the community. And in one of the articles about that, [artist Cadex Herrera] said ‘Art is therapy. Art can say things you cannot express with words. It brings the community together to reflect, to grieve, for strength and for support,’” Mooney said. “I’ve noticed that the last two years have been really difficult for our students, but the one constant has been that my students were working on their art, talking about their art. They put so much effort into it, despite all the interruptions of schools and that’s just been really inspiring to see.”

From painting different shades of red for less-experienced painters, to more elaborate designs by advanced students showcasing sunrises, an underwater scene or a blue-tinted video game, every member has an opportunity to leave something beautiful behind, as the honor society’s co-secretary, Jolin Li, noted.

“We just thought that [a] triangle would be way easier to paint compared to circles and more interesting compared to squares,” Li said. “I help [members] and I also picked a triangle and I haven’t started working on it yet but I’m thinking…the idea of healing which leads to flowers.”

For Li’s design, she said she was thinking of doing a yellow sunflower behind a blue background. Other members, like WCHS senior Beatriz Moreira Leite, were still undecided when the interview took place; Moreira Leitz wanted to do a landscape, possibly of a mountain with its rich white and blue hues. Junior Sofya Kozhukhova was going for a different approach.

“At first I was gonna go for something ironic, but then I realized that this could be an actual good, serious piece,” Kochukova said. “I know it’s gonna be something bright and colorful. I just don’t want it to look busted.”

The honor society had painting sessions after school, during Pride and at lunch. NAHS has been discussing painting a mural for years, but was unable to do so, until now. After last year’s mostly-virtual year, Mooney made it a priority to make it happen, seeking Principal John Taylor’s permission. He supported the idea and soon students were selecting triangles, sketching out designs on paper and beginning to get to work.

“At a certain point, I was like this has to happen this year. We need this. And so I just kind of started,” Mooney said. “[I hope it is] healing for all of us to get to be together again and talking about art, creating art together. So that’s a big push for this mural this year is kind of reconnecting as artists together.”

Mooney believes the finished product will be ready by the end of the year. Once all the triangles have been painted, there will be final touch-ups and reflections for the members.

This will serve as a legacy piece, one might say. Their lasting mark on the school, mirroring the wall to its brightly-colored neighbors in the artwork cases across the hall.

“I think about it only because I have a younger brother, but he’s only going to be here in like four or five years,” Moreira Leite said. “I think about it being like, I wonder what it’s going to look like when he shows up. Like is it still gonna be there?”