Get your popcorn ready: movie releases to await this year 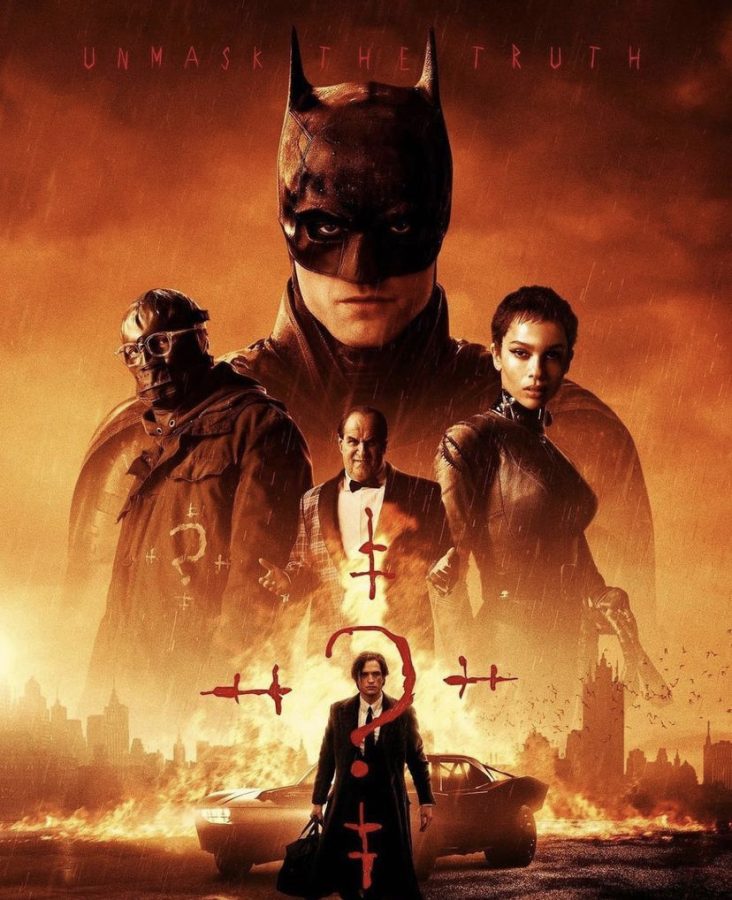 “The Batman” starring Robert Pattinson will be released on March 4th and is one of the most anticipated movies of this spring.

From blockbuster superhero movies to creative thriller films, here is a guide to the movies worth getting excited about in 2022.

“Uncharted” is an action and adventure movie based off of the video game of the same name. Nathan Drake will team up with Victor Sullivan to find a treasure that has been hidden for over 500 years. The storyline is action packed and video-game-like to fit the story’s original intent, which will be entertaining to adventure loving audiences. The movie is directed by Ruben Fleischer (“Venom”) and stars Tom Holland (“Spider-man”) as Nathan, and Mark Wahlberg (“The Departed”) as Victor.

Another action packed film of a well told story is “The Batman”. Though the story is known, there is always a new and interesting way to spin this story to thrill viewers once again. The movie is directed by Matt Reeves (the Planet of the Apes movies) and stars Robert Pattinson (“the Devil All the Time”) as Batman. However, this particular Batman seems to be a gothic version of the beloved character. He has been painted as an anti-hero multiple times over the years and this movie will likely delve deeper into that idea.

This story follows Amleth, a young boy at the start of the film, who watches his father’s death and vows to seek revenge. After growing stronger and older, Amleth attempts to reclaim his father’s kingdom and avenge his death. Taking place in 10th century Iceland, it is sure to be an absolutely wild film. It is directed by Robert Eggers (“The Lighthouse” and “The Witch”) and stars Alexander Skarsgard (“Godzilla vs. Kong”) as Amleth. It also includes many famous actors such as Anya Taylor-Joy (“The Queen’s Gambit”), Nicole Kidman (“Being the Ricardo’s”), Ethan Hawke (“Dead Poets Society”), and Willem Dafoe (“Spider-man”). The film is sure to not disappoint.

“Doctor Strange in the Multiverse of Madness” (release date: May 6)

Following some of the repercussions from “Spider-man: No Way Home”, Doctor Strange battles with the stability of time and the multiverse. As the plot enhances, it almost seems as if Marvel’s “What If” episode came true; an evil variant of Doctor Strange seems to be the largest threat to the multiverse. It is directed by Sam Raimi (original Spider-man trilogy) and stars Benedict Cumerbatch as Strange and Elizabeth Olsen, who will be making an appearance in the new film following the events of “WandaVision”, as Wanda Maximoff. Benedict Wong and Rachel McAdams will both be returning from the first Doctor Strange movie.

This origin story of beloved Buzz Lightyear from “Toy Story” follows his journey from  a test pilot to becoming a Space Ranger. During a time when many Disney character origin story movies are coming out for previously side characters, this one has a lot to live up to. It is directed by Angus MacLane (“Finding Dory”) and starring Chris Evans (“Knives Out”) as Buzz.

The first look that audiences have received barely reveals anything about this upcoming film. The only thing the studio has revealed is a 20 second clip of the theme the movie will try to capture of the iconic era Elvis Presley was from, and a brief cameo of Austin Butler (“Once Upon A Time In Hollywood”) as Presley. The film will be directed by Baz Luhrmann (“The Great Gatsby”) and also includes Tom Hanks in the cast. Given the legendary status of Elvis Presley, “Elvis” has high standards and a lot to portray.

An official trailer has not yet been released about this movie so there is little known about the overall storyline. However, according to Flickering Myth, director Taika Waititi (“Thor: Ragnarok”) stated that “there’ll be far more emotion in this film. And a lot more love. And a lot more thunder. And a lot more Thor.” This leaves almost everything up to interpretation and gives no firm standing on the film. With a release date in July, an official trailer should be available in the next few months. Chris Hemsworth will be returning as Thor; Tessa Thompson and Natalie Portman are also both returning from previous Thor films. Chris Pratt of “Guardians of the Galaxy” will be making an appearance in the film.

All that is known so far about this film is that it will be a horror film directed by Jordan Peele (“Get Out” and “Us”).  Peele being the director is enough to develop an excited audience for the film which only adds to the suspense over what the plot will involve. His last two projects were incredible films and most assume the third film will not disappoint. The film stars Daniel Kaluuya (“Get Out”) which is enough to make viewers believe in the potential this film has.

This film will be a psychological thriller starring Florence Pugh (“Midsommar”) and Harry Styles. If that alone isn’t enough to convince audiences to watch the film, director Olivia Wilde (“Booksmart”) released a teaser trailer that gives a 10 second clip of the contents of this film. However, nothing concrete is revealed which leaves audiences craving more. Needless to say, it will be an astounding thrill for audiences to watch.

“Spider-man: Across the Spider-Verse (part one)” (release date: October 7)

An official trailer has not been released but the first look provided by Sony shows a scene between Miles played by Shameik Moore and Gwen played by Hailee Steinfeld. The clip eventually shows Miles potentially falling through other spider verses. This is only a teaser but it is enough to remind fans of the beloved 2018 movie and get them excited about this new movie. The movie is directed by Joaquim Dos Santos who did not work on the first Into the Spider Verse which might make viewers skeptical of the new movie, but hopefully this new director can make an amazing sequel.

There is a lot of uncertainty surrounding this upcoming “Black Panther” movie. With the death of Chadwick Boseman, the star of the first “Black Panther,” in August of 2020, it was very unclear what direction this sequel would go in. It is still relatively unknown as to what will happen in this upcoming movie, however we do know that it will explore the world of Wakanda and give audiences a deeper understanding of that world. It is directed by Ryan Coogler who directed the previous movie, and stars Letitia Wright, Danai Gurira, and Lupita Nyong’o, all of whom will be returning from the first movie.

This new movie focuses on the characters from the previous movie as they start a family and work through navigating their world. Later on they are forced to leave their home and travel throughout Pandora. There will be a struggle between the humans and the avatar’s that will likely cause the main conflict throughout the movie. The movie will be directed by James Cameron who also directed the first “Avatar”. The movie will star returning actors Sam Worthington and Zoe Saldana.

This movie, based on the beloved video game, stars Chris Pratt (“Guardians of the Galaxy”), Anya Taylor-Joy (“The Queen’s Gambit”), and Jack Black (“The School of Rock”). Yes, you read that right. With such an unbelievable cast for a seemingly childish movie, these well known actors will likely bring in a fair amount of interest and engagement. There is not much detail at the moment regarding the plot of this movie (beyond the basic premise of the video game), but suffice it to say it will certainly be an interesting watch. The movie is directed by Aaron Horvath and Michael Jelenic.

This film will be a period piece of the late 1920’s as the film industry made its transition from silent films to talkies. It will follow multiple characters and according to the Hollywood Reporter has been described as “‘The Great Gatsby’ on steroids”. The film will be directed by Damien Chazelle (“Whiplash” and “La la land”) and stars Brad Pitt (“Once Upon A Time in Hollywood”) and Margot Robbie (“The Suicide Squad”). Tobey Maguire will be an executive producer on the film and will have a supporting role in the story.

This film is based on a book of the same name that is a fictionalized version of Marilyn Monroe’s life. The novel starts at the early stages of Monroe’s childhood and follows all the way through her death. The film adaptation will likely take a similar direction in the story of her life. A major theme the film will touch upon is the toxic environment that celebrities face. It will be directed by Andrew Dominik (“The Assassination of Jesse James”), and will star Ana de Armas (“Knives Out”) as Monroe with Adrien Brody (“The Pianist”) as Arthur Miller (Monroe’s 3rd husband).

One of the most mysterious films on this list is “Disappointment Blvd.”. Director Ari Aster (“Midsommar” and “Hereditary”) has revealed next to nothing about this upcoming film. All audiences know at the moment is that it will star Joaquin Phoenix (“Joker”) and is a 4-hour long “nightmare comedy” about one of the most successful entrepreneurs ever.

After setbacks of release dates due to COVID over the last two years, it is amazing to finally get to see many projects that have been in the making for a while. The movie industry is coming into 2022 incredibly strong and has a thrilling list of films for this year.