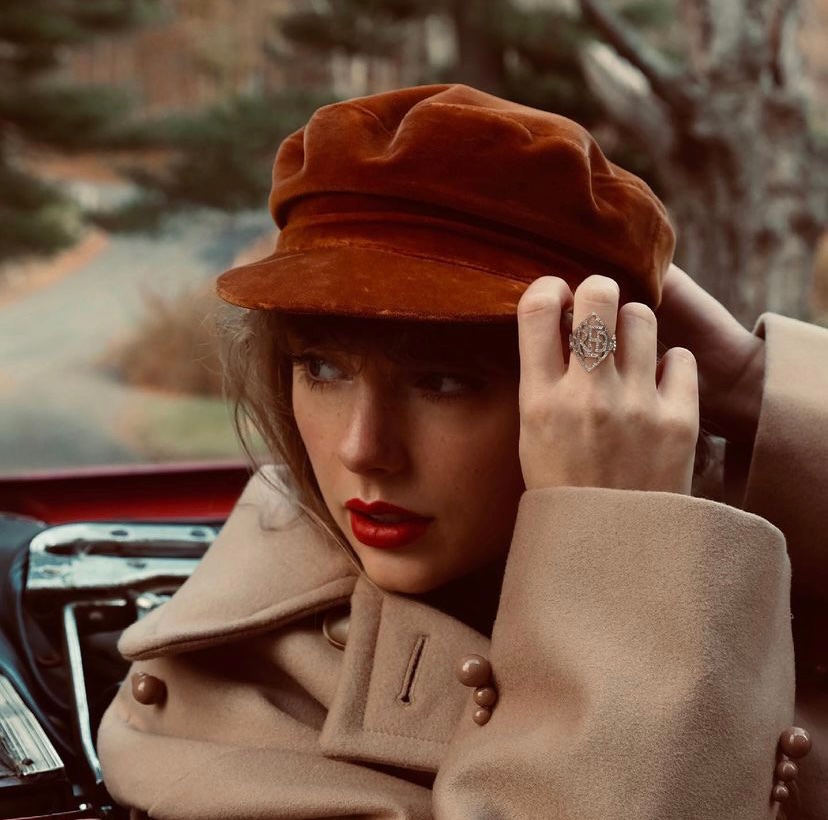 The album cover for "Red (Taylor's Version)," is simpler than the orignal 2012 cover, without the album title or even Swift's name.

There is not a lot going on at the moment for Taylor Swift. In the past year she has only released two new albums and re-recorded two of her old albums, with her most recent re-recording being “Red (Taylor’s Version),” which was released on Nov. 12. On top of releasing this two-hour long album, Swift has made sure that when the world sees red, they think of her. She has done everything from directing a short film, collaborating with Starbucks, releasing a surprise music video directed by Blake Lively, performing a 10-minute song on “Saturday Night Live” and even getting the Empire State Building to light up red in her honor.

Those less familiar with Swift might ask why she is re-recording her albums in the first place. In the early 2000s, Taylor signed with Scott Borchetta’s label, Big Machine Records. Borchetta sold Big Machine Records to Scooter Braun in 2019 along with the ownership of the master recordings of Swift’s first six albums, which Swift called her “worst case scenario.” She has been signed with Republic Records since 2018 and is now re-recording her older music to gain ownership and full rights to these songs. Following the release of “Fearless (Taylor’s Version)” in April 2021, Swift released “Red (Taylor’s Version)” on Nov. 12.

Swift’s matured voice and unique productions add a new flair to old lyrics, drawing record-breaking amounts of old and new listeners alike in. Swift broke the record for most Spotify streams on the first day of release by a female artist with 90.8 million global streams.

In addition to re-recordings of original songs from 2012, nine of the 30 songs are “From the Vault,” meaning Swift wrote them for the original “Red” album, but they did not make the cut and were never released to the public — until now.

The first of the vault tracks is “Better Man,” a slow and somber country-esque song that fans may have actually heard before it was released on “Red (Taylor’s Version).” Although Swift wrote the song for “Red,” she gave the song to the country band Little Big Town, who went on to win a Grammy for it. Taylor’s version feels more personal as listeners can hear the lyrics she wrote 10 years ago in her matured and smooth voice. The backup vocals put everything together and complete the song, making it perfect to cry-sing along to in the shower.

“Nothing New (feat. Phoebe Bridgers)” is arguably one of the most devastating songs on the album. The lyrics illustrate what it is like to be a female celebrity, with the fear of being replaced by someone younger and shinier. Swift wrote this when she was in her early twenties, already feeling that she was too old to be loved by patriarchal standards. Bridgers was the perfect choice to be featured on this song. Their voices blend together beautifully and the result is a haunting reminder of how society disposes of women once they reach a certain age.

When the song “Babe” did not make the cut for “Red,” it was given to country duo Sugarland with Swift being featured in both the song and music video. In Taylor’s version, she puts more of a pop spin on it, elevating the song to bop status.

“Message In A Bottle” is a pop song that would most definitely have topped the charts if it had been released on the original album in 2012. The upbeat vibe and catchy lyrics will make anyone get up and dance. It is a perfect song for that moment in a sit-com where the main character and their love interest finally get together.

In “I Bet You Think About Me (feat. Chris Stapleton)” Swift mocks an ex for his “organic shoes” and “million-dollar coach” and for the fact he will never be happy without her. The voices of Swift and “Tennessee Whiskey” singer Chris Stapleton blend together well, making this track one of the most fun to listen to. Swift surprised fans with the release of a music video on Nov. 15. The video follows a wedding where the groom (Miles Teller) watches regretfully as Swift turns the perfectly white wedding red. The video’s screenplay was written by Swift and Lively, and directed by Lively, making this Lively’s directorial debut. The song and video definitely left fans in awe and with constant thoughts of Taylor Swift.

Although it is one of the lesser popular of the vault tracks, “Forever Winter” is an emotional ballad with beautiful lyricism that is believed to be about seeing a loved one struggle with mental health. The song was co-written by Swift and Mark Foster, the lead singer of Foster the People.

The next vault song, “Run (feat. Ed Sheeran)” is one of two collaborations between Sheeran and Swift on the album, the second being the album’s fourteenth track “Everything Has Changed.” The lyrics and theme of running away with your lover from disapproval provide the vault tracks with a beautiful ballad.

In “The Very First Night,” Swift recalls “the night in the hotel” where she fell for another. The upbeat music and sweet lyrics take listeners back in time to Swift’s earlier lyricism about falling in love. It is very fitting for a pop album circa 2012, with a nostalgic and happy feel to it.

With her final song on the album, “All Too Well (10 Minute Version),” Swift has made history with the longest song to be number 1 on Billboard Hot 100. Just as one might think Swift can not make an already incredible and iconly sad song more upsetting, she proves she is unmatched at lyricism even considering she wrote this in her early 20s. Fans were left utterly astounded after hearing lyrics like “I’ll get older but your lovers stay my age” where Swift calls out her ex for continuously dating much younger women even after the large age difference in their relationship. The added lyrics contain many callbacks to events discussed in other “Red (Taylor’s Version)” songs like the ex missing her 21st birthday in “The Moment I Knew.”

Because Swift never stops coming up with brilliant ideas she knows her fans will love, she also released “All Too Well (Sad Girl Autumn Version),” a slower and somehow even sadder version of an already heart-breaking song that was recorded at Long Pond Studios.

Not only did Swift write and record a 10-minute long song, which in itself is no easy feat, she wrote and directed a short film to accompany the song, starring “Stranger Things” actress Sadie Sink and “Teen Wolf” actor Dylan O’Brien who play a younger Swift and an ex-boyfriend respectfully. It would be hard to guess that the film was directed by someone with no previous experience because of the way it was aesthetically shot in addition to the countless easter eggs hidden for die-hard Swifties.

On Nov. 13, the day after the album’s release, Swift was the musical guest of “Saturday Night Live.” Instead of the traditional format of two short segments on the show, Swift performed the 10-minute version of “All Too Well,” playing her short film on a large screen in the background. Swift made history as one of the longest performances on the show and kept the audience engaged for the duration of the song with falling leaves and snowflakes, stage lighting that matched with the short film and creative vocal differences from the recording.

Having been in a treacherous relationship or being 22-years-old is not a prerequisite for enjoying “Red (Taylor’s Version).” Swift’s music has the power to make each listener feel like the lucky one for getting to experience her music and inspires them to begin again after the last time listening to it.