Top 5 Books to Read During Coronavirus 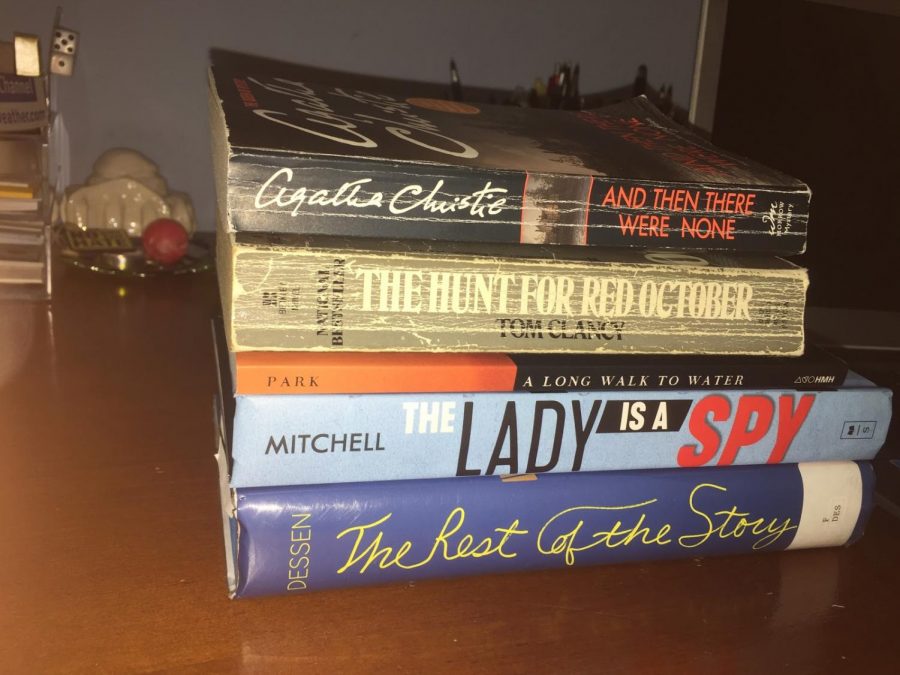 The covers of each of the top 5 books to read during coronavirus stacked on top of each other. While none of them are about a pandemic, they all have topics that can relate to this time.

For those lucky enough to not have to fight the coronavirus on the front lines, there seems to be a lot more free time than usual. Watching TV, Facetiming, doing puzzles, and going on walks are starting to get old. Now is the perfect time to pick up a good book and pass the hours.

While these recommendations have nothing to do with a pandemic, they all relate to what is happening now: adapting to change, the unknown, shortages, resilience, and hope. Here are five stories of adventure, compassion, love, and hope to get you through your days.

“The Rest of the Story” by Sarah Dessen:

Set in a summer full of change for the main character Emma, this book tells the story of getting along with family, finding new ways to keep in contact with those you care about, and adapting to change. She is supposed to spend the summer with her friend when her father goes on his honeymoon, but the plans end up switching, and she goes to her grandmother’s instead.

While there, she meets crushes and life-long friends, all while having to navigate her new normal and adapt to the changes she has to face. In an escape from the reality we are currently in, step into a place where the breeze is cool, the laughs are loud, and the memories are never forgotten.

“And Then There Were None” by Agitha Christie

This book is great for anyone looking for a murder mystery. The book starts with ten strangers going to an island in the middle of nowhere, all invited by “Mr. U. N. Owen.” As the characters start to die one by one, all being accused of killing someone else but getting away with it, the plot starts to sound like the poem hung up in all the rooms – “Ten Little Soldiers.” Race through the story and try to figure out who is the killer. It is the greatest who-done-it in history and it will leave you wanting more.

If you cannot solve the mystery of who did it by the end of the book, you are definitely not alone. Stay tuned for the chilling details of the epilogue. And if you liked it so much, catch the movie “Murder on the Orient Express,” which was based on this book.

“A Long Walk to Water” by Linda Sue Park

In a time where people are complaining about not having enough toilet paper, types of food, or freedom, just remember at least you have water in your house. This mostly-true story, follows two young children in Africa. It rotates between Salva, who is traveling around Africa during a war, and Nya, a young girl looking for water.

Taking place during the war in Sudan, and a young girl’s ‘walk to water,’ the story has messages of hope, fear, and determination. Can Salva survive the war and how does Nya survive the water shortages? Hope and love can truly win, if we are willing to put down what divides us, and this book shows how people from two different sides can work together for a common goal.

“The Hunt for Red October” by Tom Clancy

If resilience is the message you seek, then there is no better book than military-classic “The Hunt for Red October.” Written by Maryland native, Tom Clancy, this book follows an intelligence officer and a Soviet submarine commander’s journey. Jack Ryan, the hero of the book, shows how hard he is willing to fight for what is right, while Captain Ramius shows he is resilient enough to risk his life to save others.

While this book may be a bit difficult to follow for those that know little about the military, it has a great plot and a powerful story about how we are not as different as we may seem. Also, try the 1990 film starring Alec Baldwin or the online series “Jack Ryan” from Amazon.

“The Lady is a Spy” by Don Mitchell

Another military-style book, this is a historical biography of Maryland native, Virginia Hall. She served as a member of the British and American intelligence groups, working on stopping Nazi Germany from taking over France. She also helped French resistance groups and provided vital information on how to win the war.

An easy read, with pictures on at least a quarter of the pages, this book talks about resistance and never giving up. Some were concerned about Hall because she was a woman with a disability, but her resilience led her to keep fighting and working on defeating the Nazis. This book details what it is like to be fighting a global enemy and getting a win, no matter how long it takes.

Hopefully these book suggestions provide you with a couple of good reads to keep busy during the coronavirus pandemic.