Court is now in session: “Legally Blonde” debuts at WCHS 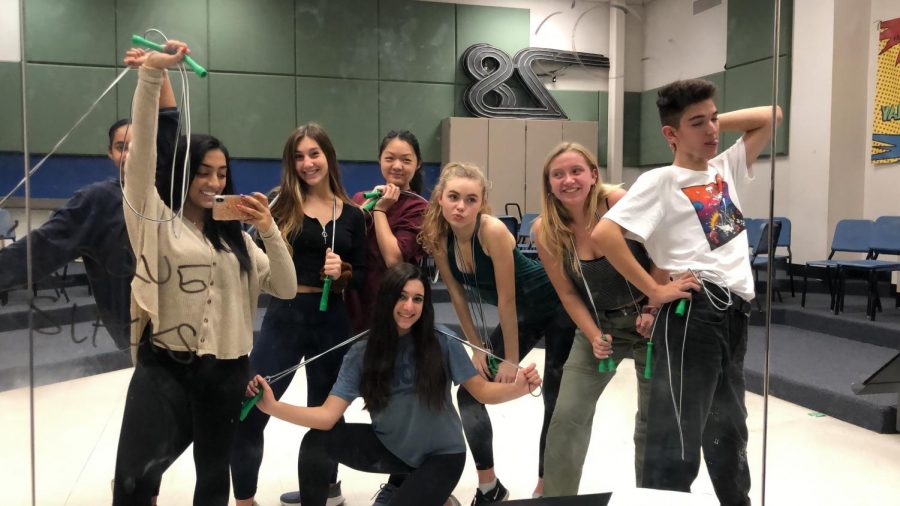 The cast of WCHS's fall musical, "Legally Blonde", is working hard at their roles during an after school practice. This group of students are practicing for a scene in the show with jump ropes as props.

Ever since Elle Woods (Reese Witherspoon) infamously taught the world how to do the “bend and snap,” the 2001 film “Legally Blonde” has become a household movie, beloved by many WCHS students. Its witty humor, infamous lines such as “What? Like it’s hard?” in reference to getting into Harvard, and inspirational messages make the film the perfect choice for WCHS’s fall musical.

The main character of “Legally Blonde” is Elle Woods, a girly fashionista who is madly in love with her boyfriend, Warner Hillman. Things were going smoothly for Elle until Warner broke up with her because he needed someone “more serious”. Desperate to win Warner back, Elle decided to follow her ex to college in order to prove to him how serious and smart she really is.

Throughout the course of the musical, viewers will be able to follow Elle on her journey of becoming a Harvard Law student and navigating her love life. WCHS junior Sydney Rubin, who is playing sorority sister Margot, is most excited for students to be able to experience all the different emotions alongside Elle as if they were on stage with her.

“Feeling like they are on Elle’s journey with her, [the audience] will feel the excitement, disappointment, pride, hurt, and a sense of power,” Rubin said. “Because this is a musical, the audience will really be able to feel all these things through the songs and dances, which makes it that much more interesting.

Compared to last year’s production of “Cinderella,” “Legally Blonde” is targeted towards an older and more mature audience. Instead of having children and families as its main audience, this year’s musical plans on keeping the authenticity of the original characters, which will be favorable to WCHS students and adults.

“Rather than focusing on keeping a G rated audience, we have tried to keep the integrity of the movie personalities as much as possible without being risque,” Rubin said. “Songs like ‘Bend and Snap’ and ‘What you Want’ showcase some pretty ‘exotic movements’ as the Harvard admission professors would call them.”

In the musical, Elle’s sorority sisters stay by her side through the entire journey. When Elle goes through her various challenges, her sisters are there to encourage her to push through. Similarly to the movie, the delta nu sorority girl is bubbly, somewhat ditzy and not afraid to put herself out there in order to get what she wants.

“I think what I’m most excited about is being able to play a character so different from the personality most people associate me with,” Rubin said.

In order to gear up for the musical, the cast members have been rehearsing nonstop in order to ensure the musical is the best that it can be. Some have taken additional vocal and dance lessons to prepare for their roles, one of these students being junior Emily Abrahamson, who will be playing sorority sister Serena.

“I have been preparing through hours of rehearsal both during lunch and after school,” Abrahamson said. “In my free time, I also have been taking vocal lessons.”

To some, “Legally Blonde” may seem to be a light-hearted comedy, simply made for pure entertainment. However, this production has an underlying message of the importance of women believing in themselves and pushing the boundaries of what is expected of them in today’s society. This is portrayed through Elle Woods, who was never viewed as someone who could attend Harvard and become a successful lawyer. Nevertheless, Elle proved those who did not believe in her, including her ex-boyfriend Warner wrong, when she graduated from Harvard and won her first court case on her own.

Abramson urges students to take note of this theme when watching the show and to pay attention to how Elle grows as a person throughout the musical.

“Although Legally Blonde seems to be just an entertaining show, some of the lessons and transformations Elle experiences will reflect what most women experience today,” Abrahamson said. “Rather than simply watching, [WCHS students should] try and figure out how sorority girls and women practicing law are viewed in society.”

The lead role of Elle Woods, played by Heather Kirschner, looks forward to the unique aspects of the show that will set it apart from previous WCHS productions.

“I think one of the really interesting aspects of our show would be all the quick changes and the use of real animals,” Kirschner said.

Going into the show, WCHS students should expect many fun and high energy dance routines, as well as super-cute and stylish costumes. They will feel a range of emotions throughout the show and will definitely leave feeling empowered and satisfied with the ending.

“This show is not something you want to miss,” Kirschner said. “We are so proud of this show and we really can not wait for everyone to see it, also wear pink to the show!”