“Be free or die”: Harriet Tubman’s remarkable story explodes on the big screen 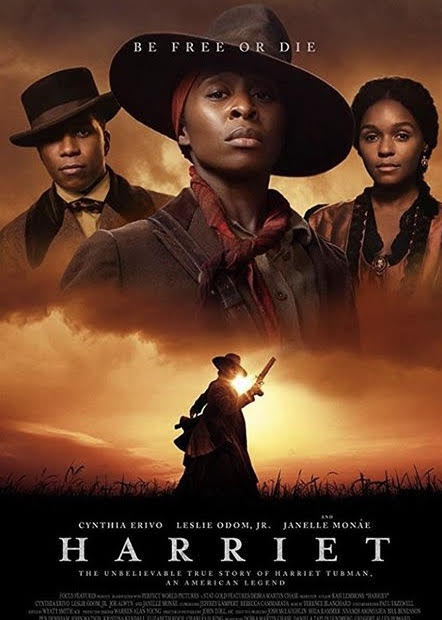 This is the movie poster of the autobiographical film about Harriet Tubman's life. It is currently playing at the Arclight Cinemas of the Westfield Montgomery Mall.

Lying flat on the ground, her eyes are closed, but her mind sees the nightmarish memories of her past along with flashes of the future. Every time she closes her eyes in prayer, she has the uncanny ability to see the unseen.

This is our first glance of Harriet Tubman (Cynthia Erivo) in the latest Hollywood biopic, “Harriet.” Her birth name is Araminta Ross, but she is known as “Minty” to her friends and family members on the Maryland plantation where they are enslaved. The film tells the story of Tubman’s escape from slavery and her 100 mile journey to freedom.

Right from the beginning, we see something unique about Tubman’s spirit: her deep desire for freedom and justice. Even though she’s the “property” of Edward Brodess, her enslaver, she imagines a life beyond the vast cotton fields: A life where she isn’t a slave, but her own person.

Gideon Brodess (Joe Alwyn), the plantation owner’s son, is the main antagonist in the film. When he announces a plan to sell Minty downriver, she decides to flee to Philadelphia. He and his men corner Minty on the way out, and he asks her to return to his plantation, but she replies: “I’m gonna be free or die.”

She makes it to Philadelphia safely, but is not content. She would rather sacrifice her life for her cause than feel alone in her newfound freedom. Perhaps this is when she decides her life purpose is to help free as many enslaved people as she can.

Critics have criticized this film as being “formulaic” and “too much like a history lesson,” but generally the movie has gone over very well. The film earned $12 million from theaters on its opening weekend. It scored a 72% from critics on Rotten Tomatoes, but a 97% from audiences. Audiences also gave it an A+ in CinemaScore.

Even though the audience ratings are high, the movie went through several obstacles before its release. Some in Hollywood were doubtful that a movie directed by a woman, especially a woman of color, would be successful. However, Kasi Lemmons, the director, defied expectations.

In a Nov. 4 interview with The Los Angeles Times, Cynthia Erivo talked about Hollywood’s reluctance to cast a female black protagonist in a movie.

“I think in the world that we live in right now, we’ve constantly been told that we can’t do things, that we’re not allowed in certain spaces, that we have no agency. In 2019, that’s not really changed,” Erivo said. “I think it’s inspiring to have this new piece of work to show that through the ages black women have been changing the world.”

Gregory Allen Howard, screenwriter of “Harriet”, went through several obstacles as well in order to get the screenplay produced. According to a Vox interview with Howard on Nov. 4, it took Howard more than 25 years.

“The whole environment in Hollywood had to change. It had to. And I’m glad it did, because I wasn’t advocating changing the industry,” Howard said. “But I didn’t realize what it would take. #OscarsSoWhite, Diversity in Hollywood, all of that had to happen, to set the table for Harriet.”

Modern America is more accepting than it was in the 1990s, but there are still improvements that can be made.

According to a Apr. 9, 2019 article by the Pew Research Center, 84% of black people and 58% of white people say that the legacy of slavery greatly affects the position of black people in American society today. This only further proves why the release of “Harriet” is so important: it reminds us that abolitionists like Tubman have fought for freedom since the beginning. The movie also reminds us of our collective humanity.

As a Joe Alwyn fan and as someone who likes history, I thought the movie was good, but somewhat formulaic. Some parts of the film seemed exaggerated or fictional to create the perfect hero’s narrative. However, it was still worth watching because I was able to see history from a different perspective, one that isn’t always shown in U.S. history classes.

Even today, more than 100 years after Tubman’s death, her story still speaks to our society. For her, freedom was never just a dream; it was always an achievable reality. Tubman’s vision of equality is something that we are still working towards today.